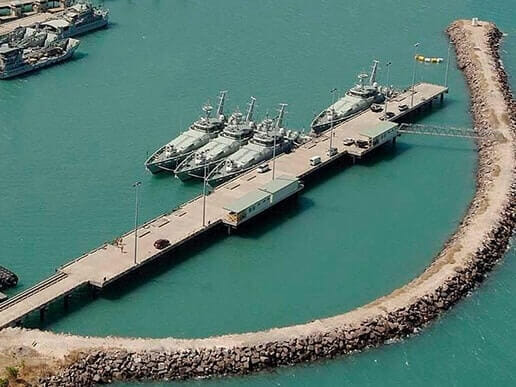 Work on a new wharf to support the Royal Australian Navy’s major surface combatant ships and submarines in Darwin is expected to get underway later this year, after a tender was awarded for the project earlier this month.

The project is a key pillar of the $495 million Larrakeyah Defence Precinct redevelopment, which was announced in 2018 by the Federal Government.

The precinct’s revamp consists of two projects – a $223-million base redevelopment to upgrade critical in-ground infrastructure and a $272-million naval operations upgrade including constructing the new wharf.

“The projects will enhance the Australian Defence Force (ADF) capacity to conduct operations and exercises in the north of Australia, while providing fuel storage and refuelling capabilities to meet current and projected demands,” Minister Payne said.

“This investment in Defence facilities will enhance support to ADF operations and maximise opportunities for local industry.”

The project will allow for the HMAS Coonawarra to accommodate larger ships such as Amphibious Assault Ships (LHDs), the largest ship in the Royal Australian Navy’s fleet.

Both Larrakeyah Defence Precinct projects will be delivered by Laing O’Rourke as Managing Contractor and are due for completion by mid-2023.