Ludmilla dumping ground: Who is responsible for tonnes of toxic rubble on protected land? 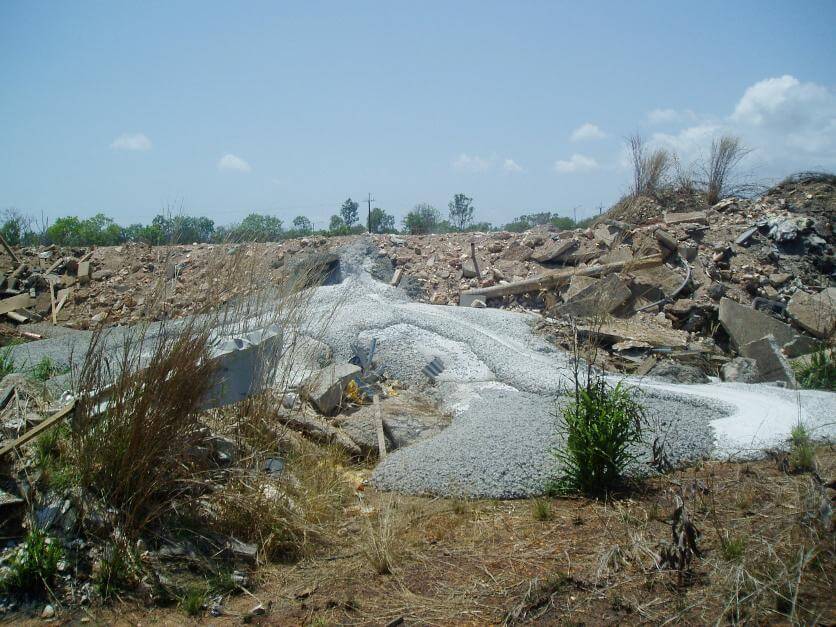 More than 15 years after hundreds of tonnes of toxic rubble first began to amass on conservation protected land in Ludmilla, next to an Indigenous community, questions remain over why it is still there and who is responsible.

Despite hundreds of Darwin residents passing the stockpile daily as they commute to work along Dick Ward Drive, and reports of children playing in the ruins tarnished with deadly asbestos, the site is nowhere close to being remediated.

In correspondence with a concerned resident last year, Infrastructure Minister Eva Lawler said the “Government stands with the Darwin community in wanting to ensure the matter is appropriately addressed”.

But the mountains of rubble are on Indigenous-owned land, and because the Gwalwa Daraniki Association in charge of the land had entered into private deals dating back to before 2007, the NT Government “can only facilitate a way forward”, the letter stated.

Since 1972, Bill Day, a stalwart Darwin anthropologist has been scrutinising the area as dump trucks upended loads of debris to two neighboring sites.

One site he says dates back to just after cyclone Tracy that devastated the city of Darwin in December 1974. It has since been covered with soil. Built on top is the Indigenous community of Minmarama.

The other began to amass in 2006. On the high wire fence surrounding it, Dr Day said there was a sign warning people to keep out or otherwise contact Darwin construction giant Halikos Group. 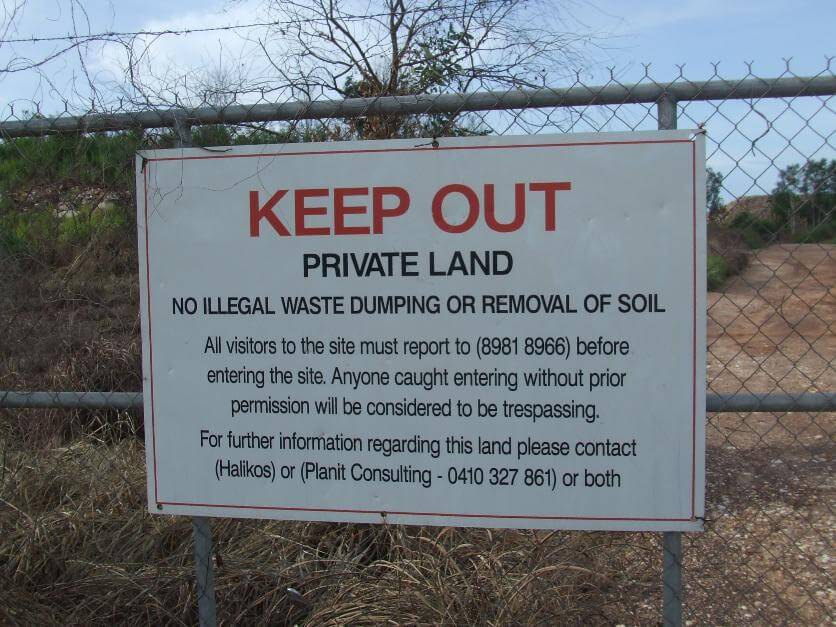 A sign captured by Dr Bill Day on the fence of the dumping ground in Ludmilla. Picture: Bill Day.

He says Ms Lawler’s correspondence is an “abdication of administrative responsibility to claim that the government is not a party in unlawful use of Crown Land granted for community use”.

The land has never been rezoned and is of high conservation value, Dr Day says, adding the pile of toxic waste “stinks of corruption”.

Responsibility for the site has been shifted as public servants come and go, but Dr Day said it is ultimately in the hands of the NT Government to enforce zoning laws and environmental acts.

In 2015, Dave Tollner, the Minister for Lands and Planning at the time and a former CLP deputy chief minister, confirmed the stockpile was unlawful.

In correspondence with Dr Day he said his department was “monitoring the situation” and highlighted a “fill removal and re-vegetation management plan” was required.

Drawing the ire of residents who live nearby amid heightened concerns the site will be overgrown and forgotten, Dr Day said the government has washed its hands of responsibility.

“It is unbelievable it is still there,” he said. “I’ve been publishing stuff on this for decades.”

Sharon McLennan, a Larrakia woman who grew up in Ludmilla, remembers what is now the Minmarama community as her playground.

Years before the land was granted to the Larrakia people in 1979, and Federal Government houses were built, it was Crown Land, and the stomping ground for the many kids in the neighbourhood. 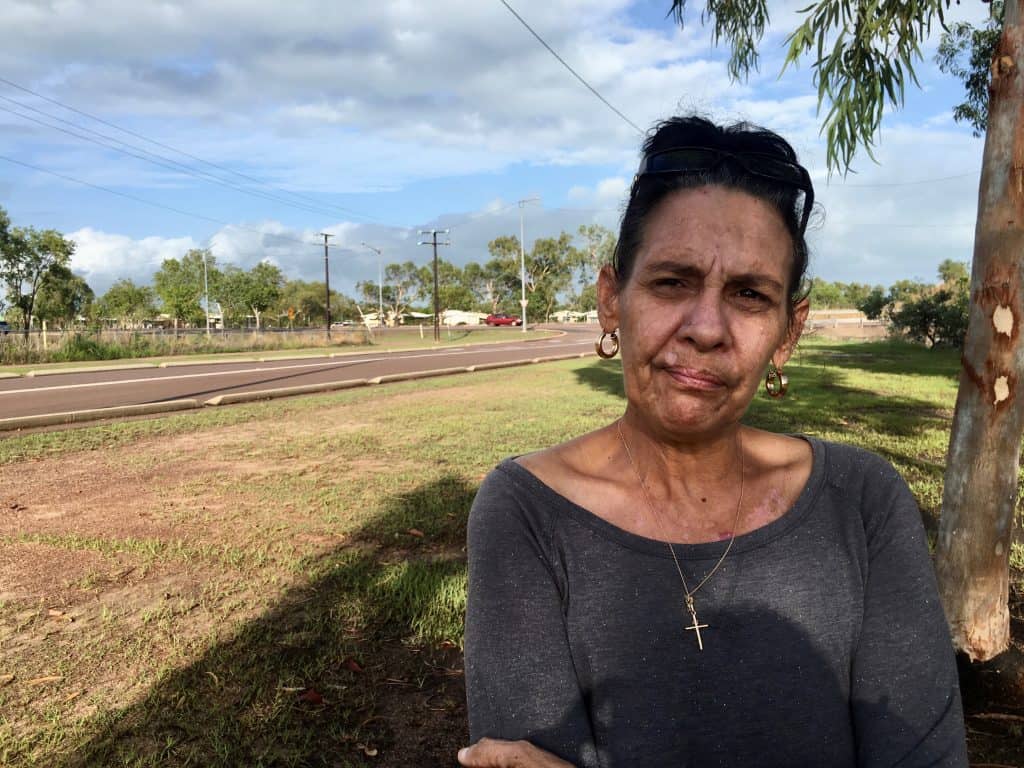 Sharon McLennan, a Larrakia woman says she wants the mess cleaned up.

It wasn’t until much later that she joined the fight to have the area cleaned up, after houses were built on top, and she watched the protected land adjacent become the new dumping ground.

“We saw housing materials, building materials, 44-gallon drums, everything dumped there, and then they layered soil on top and built these houses,” she said.

“This land is important, I grew up here and it is devastating to see nothing happen.”

While the dumping at Minmarama may have been legal at the time, Dr Day said serious concerns remain over what he believes is toxic debris beneath.

“I am very concerned that people are living on top of the toxic waste dump, the fact is I’ve never heard of that happening anywhere else before. Whole houses were dumped there. Whether that toxicity is seeping into the air or water we don’t know,” he said.

“But the fact remains, the Federal Government built houses on a toxic dump.”

Dr Day has kept records of countless letters to government officials, newspaper clippings, pictures, aerial photos of the site and videos on a carefully documented website.

Shortly after the dumping ground next to the Minmarama community began, he decided to test for asbestos. “I did go despite signs saying to keep out,” he said. “Out of my own pocket, I tested for asbestos and found it was there.”

“No amount of asbestos is safe.”

At the time, his revelation was reported in the NT News, highlighting the discovery of chrysotile asbestos, found in insulation, sparking concern among residents.

“We wanted to draw attention to an illegal stockpile,” Dr Day said.

“The dump has never been supervised… I found asbestos there, and I see children playing on that dump.

“The public needs to know how the government can let this happen.”

Minister Eva Lawler’s office was contacted for this article but did not respond.