‘Kill or be killed’: The real story of Charlie Flannigan, the first man hanged in the NT Charlie Flannigan had a problem: kill or be killed.

Flannigan was a fine stockman, station hand and accomplished jockey.

Depending on whose account you read, Queensland stockman Samuel Burns Croker was a saint or a sinner.

Those who thought him saintly tended to engage in punitive expeditions to massacre Aboriginal people in reprisal for the murder of a white man or, more often, cattle killing.

His fans included the likes of Mounted Constable August Lucanus, himself responsible for several massacres, who described Croker as a “first class bushman.”

Lucanus recruited Croker to his punitive expedition at Red Lily Lagoon in July 1882, reprisal for the killing of Duncan Campbell on 15 July at Elsey Station.

By Croker’s own admission, he couldn’t fight, but he could shoot, which is probably what made him so “first class” to Lucanus.

A prime suspect in Campbell’s death was a man named Charlie who escaped from the Red Lily carnage unharmed.

Lucanus, in his memoirs written 40 years later, said he happened upon Charlie in a dawn attack at Elsey Creek in 1885.

“When the n***ers woke up and saw us they tried to rush us and get their spears, but they got a good reception,” he wrote.

Croker a ‘willing participant’ in massacre

Sam Croker was reputed to be Nat Buchanan’s right-hand man and accompanied him on several trips, including the overlanding of 20,000 cattle from Queensland to the NT and pioneering the Murranji Track.

On a cattle drive to Glencoe Station, one of Buchanan’s hands, William Travers, was murdered while he was alone in the camp near the Limmen River in December 1878.

Croker was a willing participant in the reprisal massacre, notwithstanding that Buchanan said it was impossible to identify the perpetrators and that 24 inches of rain had fallen since his murder.

Local Aboriginal people, whether or not they were involved, “met with just retribution.”

Writing in the Argus, an unidentified ‘old timer’ wrote: “Somewhere in the locality indicated, in a…cave, over 25 years ago, I saw probably 20 bodies of natives who had recently been shot by a well-known Queensland overlander.” 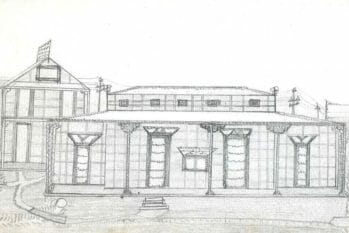 On Buchanan’s stations, Croker was engaged in general station duties, including mustering, fencing and the tanning of hides (hence the nickname).

At the time of his death, aged 40, he was Acting Manager of Auvergne Station in the absence of Jack Watson, himself infamous for his braggadocio and apparent willingness to “charge Hell with a hand bucket.” Watson was rumoured to have 40 pairs of Aboriginal ears nailed to walls at Lawn Hill Station.

According to Tony Roberts, Gordon Buchanan – Nat’s son – wrote that Croker shot a Gurindji man in the back for attempting to take a bucket. The younger Buchanan was critical of “the ruthless and often insensate methods of Croker to awe the blacks.”

Charlie Flannigan had a problem: he was a half-caste man under Croker’s command.

Croker recruited Flannigan at Wave Hill Station in July 1892 to construct cattle yards on Auvergne. There he suffered bullying and intimidation.

One of Croker’s devices, detailed in Flannigan’s statement to police, was to fire at cattle in close proximity to Flannigan. Given that Croker was an excellent shot, this was not an accident.

“‘I heard a shot and saw something strike the ground about 10 yards in front of me. I heard two more shots. I drew McPhee’s attention to the first shot and said, ‘That man is trying to shoot either you or me’.”

That night, September 20, 1892, Croker and McPhee went to the kitchen where Flannigan was playing Crib with the Chinese cook.

They agreed on a four-hand game and cut for partners, Croker drawing Flannigan but refusing to play with him.

The two coloured men—Flannigan and the unnamed Chinese cook—partnered against Croker and McPhee. The stakes were a stick of tobacco.

Argument ensues over Flannigan’s hand: ‘If I am a bastard, I’ll have a fight at you’

An argument ensued about the tally of Flannigan’s hand, enraging Croker and prompting a tirade of abuse.

Flannigan said, “If I am a bastard, I’ll have a fight at you.”

Croker responded, “I can’t fight, but I will bloody well shoot you.”

Flannigan dropped his cards and ran 15 yards to his bough shed where he loaded his Snider Enfield rifle.

Croker ran for his camp to retrieve a weapon, but Flannigan fired, killing him.

This commotion was enough to strike terror in the hearts of the cook and his Aboriginal kitchen assistants who fled into the bush—the cook did not return until morning. After breakfast, they buried Croker and Flannigan offered to accompany McPhee to the police, but McPhee advised him to clear out, which he did.

A few days later, he presented himself to the Manager of Negri Station, a Mr Booty, who advised him to give himself up and assigned a station hand to accompany him to Halls Gap Police Station where he did just that.

Flannigan’s decency and willingness to surrender may appear to be circumstances of mitigation, but the NT Times and Gazette reported on 24 February 1893, when it published Flannigan’s statement to Halls Gap Creek Police, that the statement was never tendered in evidence at his trial where he entered a plea of not guilty and said nothing in his defence.

Charlie Flannigan had a problem: he was a black man accused of murdering a white man.

One of the rituals associated with a sentence to death is that the condemned prisoner will serve out their time in solitary confinement.

It was during this time that Flannigan documented his story in a series of drawings now held by the South Australian Museum and on loan to the NT Library for exhibition, entitled A Little Bit of Justice curated by Don Christophersen, until the end of June.

Charlie Flannigan’s problem has been laid bare and is well worth a visit.