‘It is apparent that you have lived in a very violent milieu for many years’: PTSD sufferer jailed for stabbing her violent partner 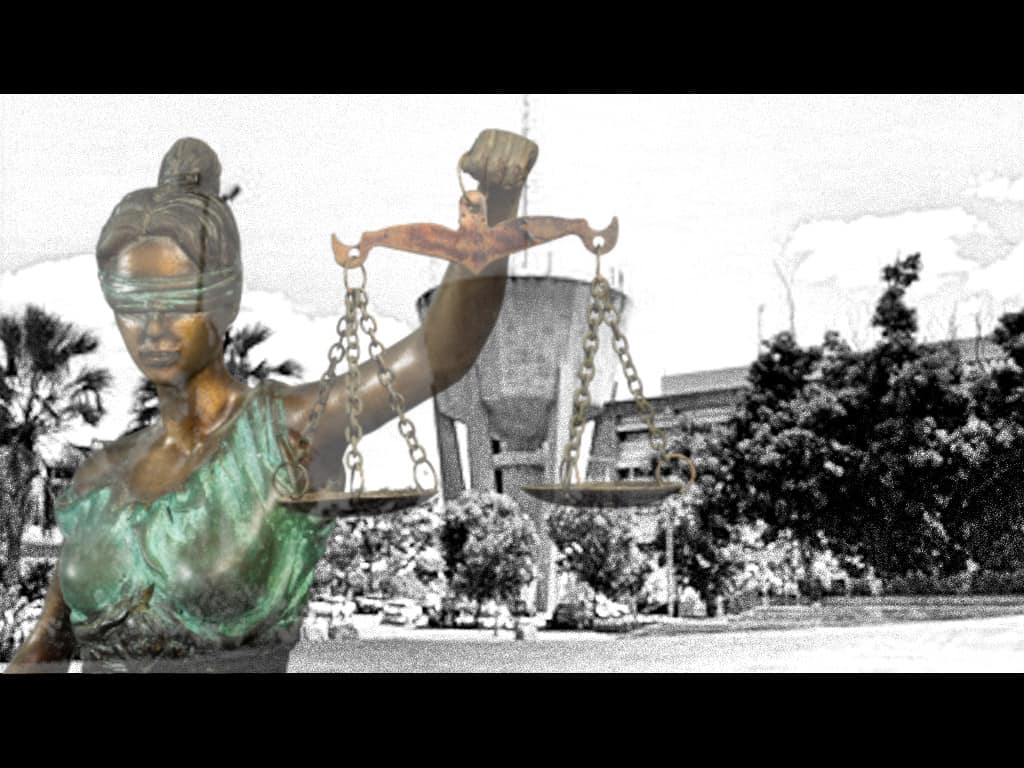 A woman suffering from PTSD with a long history of being a victim of sexual abuse and domestic violence but with a significant violent record herself, has been jailed for repeatedly stabbing her violent then-partner including piercing his stomach while they were both drunk and walking in Palmerston.

Beryl Dandy, who was 41 at the time of the crime, pleaded guilty in the Northern Territory Supreme Court to one count of unlawfully causing serious harm to the 48-year-old known to the court as LR.

The offence carries a maximum penalty of 14 years.

In sentencing on November 4, Justice Peter Barr said Dandy had been served a domestic violence order in February 2019, preventing her from being in the company of LR when she was drinking alcohol or when drunk. A reciprocal order had been made for her against LR.

Justice Barr said that about 5pm on December 23, 2019, the two were walking between the Palmerston Shopping Centre and the water tower car park when they became separated. Dandy wandered and then sat down for a few minutes in a garden bed before arming herself with a 20-centimetre kitchen knife.

Justice Barr said as LR walked past her, he appeared to say something and gesture at her and then walked away.

Dandy ran towards him with the knife from behind, and as LR turned to defend himself, Dandy stabbed him several times, twice wounding him in the torso, he said.

“Firstly, with the knife in your right hand, you raised it above your head, and in a downwards motion, stabbed towards the victim’s chest. The victim used his arms in an attempt to defend himself,” Justice Barr said.

“Secondly, you then pulled the knife back towards your chest before again thrusting it forward in a backhand motion towards the victim’s torso. LR evaded that strike by jumping backwards.

“Thirdly, you pulled the knife back again and over your right shoulder, and again in a downward motion, stabbed towards the victim’s torso. He again moved backwards and used his arms in an attempt to defend himself.

“Fourthly, LR kept moving backwards, but you chased him. You again raised the knife above your right shoulder and advanced towards him. You then lunged at him and again stabbed at his torso in a downward motion.

“The fifth stage was that you grabbed at LR with your left hand before raising the knife above your right shoulder. You then again stabbed at his torso. He in turn made attempts to defend himself by moving backwards.

“The sixth part of it is that you raised the knife above your shoulder yet again. You moved it towards your chest and then thrust the knife in a backhand motion towards the victim’s torso.

“After that, you lunged again and used a backhand motion to stab towards his torso for what was the seventh time.”

Justice Barr said it was all caught on CCTV, and left LR with two torso wounds and a large cut on his hand.

The couple then walked together for about 100 metres to the Palmerston Tavern bottle shop where LR repeatedly grabbed her before Dandy stabbed at him again and then threw the knife on the roof.

After they were kicked out of the bottleshop, Justice Barr said LR soon collapsed due to blood loss.

“You walked away from him at that stage, but a short time later, you came back and hit LR in the head, using your right hand,” Justice Barr said.

“He lay on the ground at that stage, defenceless. Your striking the victim appeared to rouse him. He got to his feet and began to walk away with you.

“A short time later, LR walked into the Smokemart retail store, where he collapsed to the ground as a result of his injuries. You left at that point.”

LR was taken to Royal Darwin Hospital and the next day Dandy was arrested and told police: “It was for revenge.”

Long history of domestic violence perpetrated by both parties

Police took Dandy to Royal Darwin Hospital for a medical check and treatment for a 1cm stab wound to her thigh, which she said LR had inflicted the day before, and also for a foot wound sustained three days before.

Justice Barr said one of the stab wounds to LR’s torso penetrated his stomach and required surgery.

“The stab wound to the stomach constituted serious harm insofar as the victim could have developed sepsis and died if he had not been medically treated for the wound,” Justice Barr said.

Justice Barr said Dandy attended Kormilda College as a boarder up to year 11, and only left school because she was pregnant.

He said she met LR in 2002 when she was living in Kalkarindji as a single mother with two daughters and had been working locally. Soon after Dandy moved to Katherine to live with LR in a relationship involving serious violence, with jealously by LR.

Justice Barr said that in one instance he assaulted Dandy with a rock because he was jealous she had shaped her eyebrows in a particular way. And he said, Dandy recalled that in about 2007 LR hit her with a metal bar, requiring surgery to fuse Dandy’s elbow joint with surgical pins.

Her lawyer told the court Dandy tried to leave the relationship with LR but that he resisted the separation, and between 2007 and 2017 Dandy and LR had an on and off relationship, characterised by heavy drinking and crime, often with the intent of obtaining more alcohol.

While the violence went both ways, Dandy’s lawyer had told the court LR’s violence became more vicious and controlling from around 2014, when she tried to leave him.

“Your lawyer described a history of very controlling behaviour, including control of your money and controlling even when you could go and have a shower,” Justice Barr said.

He said she had sought medical treatment as the victim of physical and sexual assaults by LR and other assailants as well.

“It is apparent that you have lived in a very violent milieu for many years,” he said.

“In about 2016, he kicked you in the mouth and knocked out your front teeth,” he said.

“In September 2019, he stabbed you to the stomach because you did not immediately comply with his request to beg for money from strangers to buy wine.

“Then in September or October of 2019, LR burnt you with a stick, causing your bra to become attached to your skin.”

Justice Barr said Dandy had previously successfully completed a program of residential rehabilitation but re-offended after completion and said she had trouble staying off alcohol because she did not have suitable housing, the influence of LR, and because she used it to numb her feelings.

He said Dandy’s lawyer said she was angry when she stabbed LR because he was controlling $60 she was given which she wanted to use to buy food but he wanted to buy two cartons of beer.

“I note that the psychologist who assessed you in mid-October this year wrote as follows: ‘Ms Dandy reported that she likely acted impulsively and defensively; however, could not definitely state why she engaged in the offending behaviour, as she reported she often has blackouts when she consumes alcohol in the context of domestic violence’.”

Justice Barr said Dandy had 17 convictions for assault, many of those aggravated assault, committed against LR, police officers and against other victims, often because of jealousy.

“…Nothing in your history quite matches your stabbing attack on LR on 23 December last year,” Justice Barr said.

“That attack would appear to be a significant escalation in dangerous violence on your part. Whatever might be said about the background to your offending, about the violence which you endured in your tumultuous relationship with LR, you have been a very violent person in your own right.

“Your violence is no doubt closely connected with your extensive history of alcohol abuse.”

Justice Barr said the psychologist found Dandy suffered cognitive impairment and memory deficits. He said the cognitive impairment significantly impacted Dandy’s ability to problem-solve, make good decisions, and exercise good judgment, and made her highly susceptible and vulnerable to coercion and being taken advantage of.

“The psychologist also reports that you meet the diagnostic criteria for PTSD or post-traumatic stress disorder.”

“I accept the opinion of the psychologist that all of those disorders causally contributed in some way to your offending,” he said.

But he said he was satisfied by the psychologist’s report that Dandy was a high risk of committing violent offences in the future.

Justice Barr sentenced her to three years and two months jail, with a non-parole period of 19 months, both backdated to December 24, 2019.