‘I’m angry I’m on the electoral roll’: The saddest election in the NT’s history is wearily observed 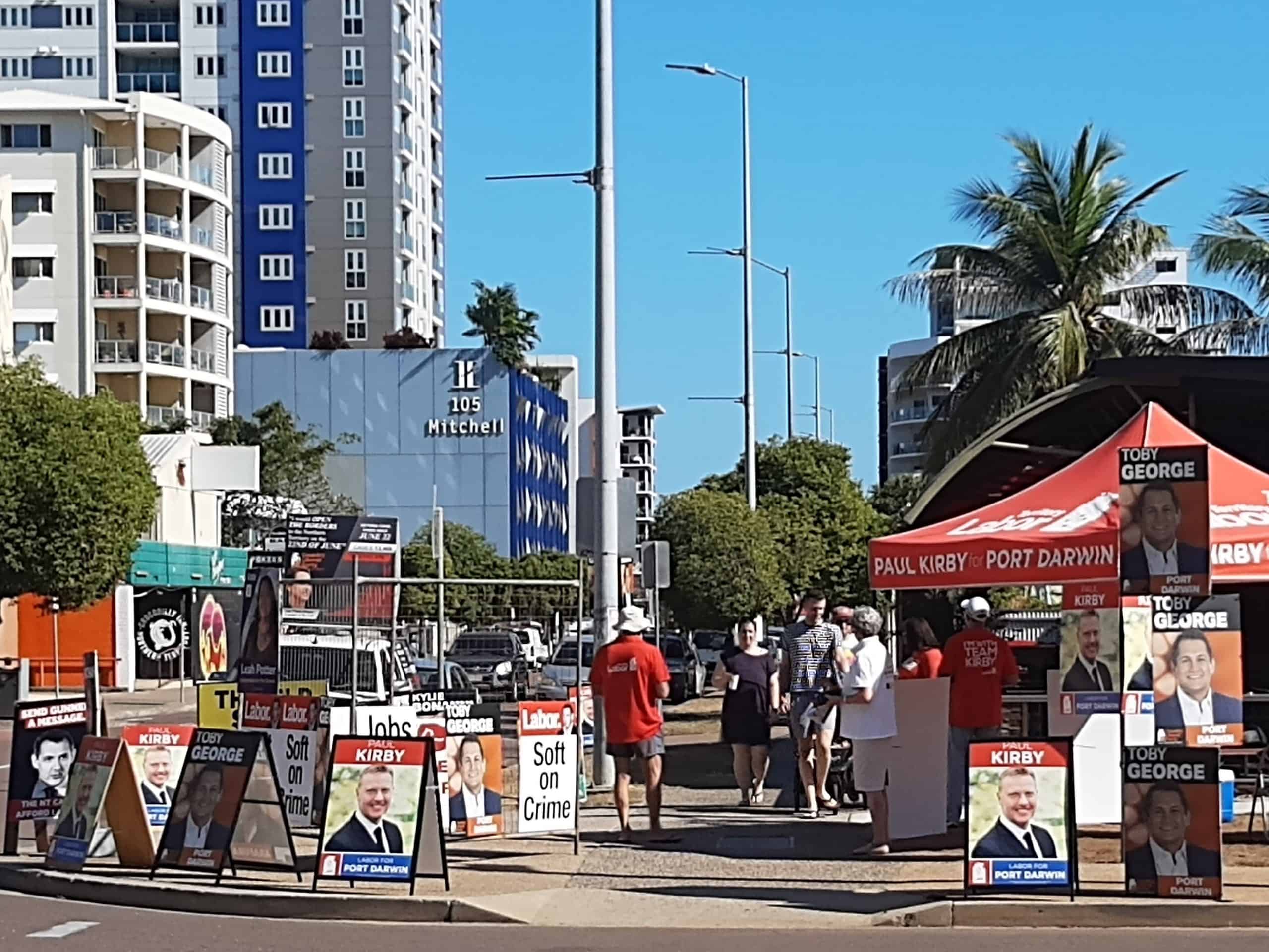 Out at Humpty Doo Hotel, no one is seemingly thinking about the election. It actually seems, from the way people are dressed – less blue singlets or big, rabbit powered hats for a typical Saturday afternoon – like there are many there who have sought refuge from the city and the election.

At the Humpty Doo polling booth, one woman, who says she doesn’t want to give her name because she works for government, sums up what many probably feel: “I am very angry that I’m on the electoral roll”.

There does not seem to be the power that comes with exercising any democratic right in this election, except perhaps for those espoused to parties, but more, “If I don’t vote I’ll get fined, but I don’t want to be to blamed for who my vote helps elect”.

I ask the woman behind the counter at the Howard Springs newsagency if she’s excited about the election.

She gives a sarcastic response. No one I ask wants to speak on the record about it.

While retiring Nelson MLA Gerry Wood sits in a fold up chair on the side of Whitewood Rd, next to his anointed successor Beverley Ratahi, it seems about right.

Back in the city, on Mitchell St, the supposed new party – we’ll take both words new and party with some caution and a roadtrain’s worth of salt – Territory Alliance has a little pop up gazebo on the footpath with old mate manning it, sitting next to it in a fold up chair in the small part of the footpath formerly left unobstructed.

Someone asks me whether it is a living political election day performance art piece about the blockages of government or some such thing.

I tend to think it is the entitlement that comes with politicians and those who surround them, even when they haven’t been elected yet.

They are the parasitic carnivores, the jackals or the hyenas waiting on the street corners. The only thing that keeps them at bay is the electoral jungle kings, the NT Electoral Commission, who have a 100 metre exclusion zone for party apparatchiks, and those who just can’t get friends any other way, slinging how to vote confetti for those who don’t think real good.

When asked why the f**k he was blocking the whole footpath, especially when there was a deserted car park next to him, old mate stumbles more than a politician going off script then says, there was more ‘shade’ for him if he obstructed the footpath.

United States investigative journalist and Pulitzer prize winner David Cay Johnson – who has written books about Trump and scathing analyses about politics in his country – says politicians are the employees of the people and they need to be made to understand that and be treated like that.

In the Port Darwin voting centre, which in itself is illustrative of the situation in the Territory, being held in the now closed cinema, there is a small amount of people coming through. About 50 per cent of the population have already voted anyway, so that adds to the lack of the gravitas of this election day.

When the woman handing out the ballots asks this reporter if he’s voted before, she’s told: “Do you think I would really want to vote twice?”

She looks kindly back with an unknowing smile.

The only punctuation point is when independent candidate for Fong Lim and laksa vendor Amye Un rocks up in a souped-up Hilux and beeps her horn, making elaborate motions before getting out.

She became more well known last September with her bonkers video and a slogan of “Give us green” and waving a giant wooden spoon around, telling Lord Mayor Kon Vatskalis he should use it to smack his people into action to make the median strip of the Stuart Hwy outside her warung green.

A few days later there were people out there planting plants.

She then ran for Kon’s job.

‘I am beyond logic and rationality’: The NT finds its voice

Un walks stridently towards the voting centre, with a flower in her hair, and hangs around outside with the air of former politician and former Filipino first lady Imelda Marcos about her.

Imelda was famous for having more than 3,000 odd pairs of shoes. Un does not seem to have a mansion full of shoes but she has something else in common with Imelda, crazy media performances.

“I am beyond logic and rationality,” Imelda once said.

If the actual Territory could speak for itself, that might be one of the first things out of its mouth.

Marco’s husband was kleptocrat Ferdinand Marcos. His 21-year reign was infamous for its corruption and extravagance.

A kleptocracy would not be that out of place in the Northern Territory, where respect for the Westminster system is not even well respected, nor perhaps understood by some politicians, let alone the people. Think of the extra support that came out publicly from her electorate and other places, for former speaker Kezia Purick after the Independent Commissioner Against Corruption found she engaged in “corrupt conduct” by misleading investigators under oath and engaging in undemocratic behaviour.

She is still running as an independent and is expected to win.

That is the place we are voting in and leads back to the man who wrote about Trump.

Journalist Johnson not only writes about what lead to corruption, despair, and inequality but what regular people need to do to reverse it and put the power into the hands of those who will act with the interests of the people, not just, to use the colloquial language of the NT, to get their turn riding in the white cars.

“We need someone, multiple people, to arise who understand the structure and nature of the problem and can then put it in terms that ordinary people understand before we get real change,” he also said about changing what is going wrong in the USA.

From what the major parties have promised in the lead up to this fiasco disguised as an election, that has not happened.

The best thing most people will get out of this election is the free pencil. And it’s really only half the size of a regular pencil.