No sausages, little hope: Voters slow to turn out to polls for 2020 NT Election 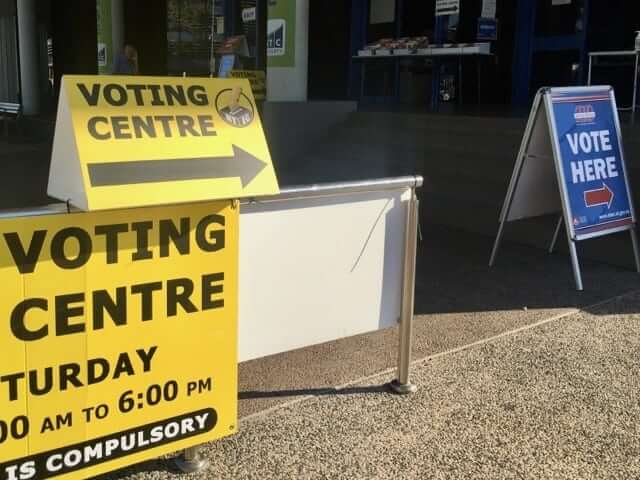 With a record amount of ballots cast ahead of today’s Northern Territory election poll, Darwin’s Mitchell Street voting centre was a very quiet affair, as were polling stations across the northern suburbs.

At an election where there are no sausage sizzles, there also appeared to be nobody to eat those sausages anyway.

It is Australia’s first major mid-pandemic election, with no scent of grilled meat and onions in the air to catalyse a sense of excitement, leaving plenty of space for the palpable despondency to shine through.

The scene was the same in the northern suburbs, where candidates lingered under the tents waving to anyone who drove past as a few tired souls lumbered up to the box to have their say.

While one voter put this election in the “stock standard” bucket, it is shaping up to be an unpredictable poll, with the ballot boxes holding the answer and pledging not to reveal its secrets until late tonight. 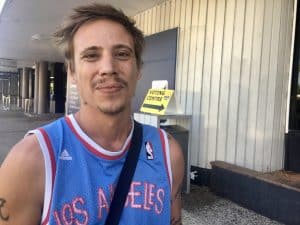 Ambling along among others rushing to get their vote over and done with, Matt Fairlezz said he was disillusioned, at best.

The party politics and the inertia from the top to make changes without a vested interest have been frustrating, he said.

Like many, Mr Fairlezz said fracking and the environment were the big issues at play this election, but he didn’t see much hope for a change in government attitude.

“I didn’t agree with any of the party platforms,” he said.

“I’d say I’m disillusioned by the party politics… deals happening on the side, lack of transparency and rich people getting richer.”

‘Up against the machine’: Independents and Greens waging battles

One-hundred metres up the road, Sarah Boyd has been campaigning for the past two weeks for Leah Potter, an independent candidate for Port Darwin.

With the build-up heat already making its presence known, the days have been long and sticky, but far busier than today.

Her partner is Animal Justice Party candidate for Nightcliff, Shelly Landmark, so she says she’s been paying close attention to the race.

As the major candidates have fired shots at one another and presented their lacklustre platforms with gusto over the past couple of weeks, she’s watched on, frustration building, she said. 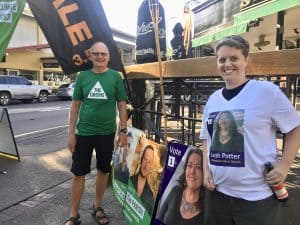 “It’s that typical David and Goliath situation, who has the most resources, but I guess that’s the story of politics on every level,” she said.

“We have a lot of good candidates running, like Leah, who runs a soup kitchen, and my partner who is a human rights lawyer, up against parties like the CLP with huge budgets.

“It is a bit frustrating to know there are good Greens candidates or Independents up against machines that care more about business than people.”

Darwin born and bred, first-time CLP candidate, Toby George, running for the seat of Port Darwin, quietly slipped his vote into the box with little fanfare this morning.

No queues, no voter questions, no ceremony – there was barely anyone else around.

He said there has been a big shift in momentum over the past week, as leader of the CLP Lia Finocchiaro muscled her way in and showed some “strong leadership”.

“It has been an interesting campaign – an eye opener for me as a first-time candidate,” he said.

But, the inescapable unsavoury aspects to politics and campaigning playing on many a voter’s mind has been buoyed by the overwhelming support from members of the community, he said.

When will we know the outcome?

The polls close at 6 pm and counting will commence soon after.

The NT Electoral Commission has said more than 75,000 of the Territory’s 141,225 eligible voters have cast their ballot at early polls. That record number could slow the counting, the NTEC has warned.

A number of seats are expected to be close so don’t expect an early decision. If results in some electorates considered not so close are determined earlier, the NTEC has said they will turn their resources and attention to the more marginal seats.

Counting will continue to midnight and will resume Sunday morning at 10 am.