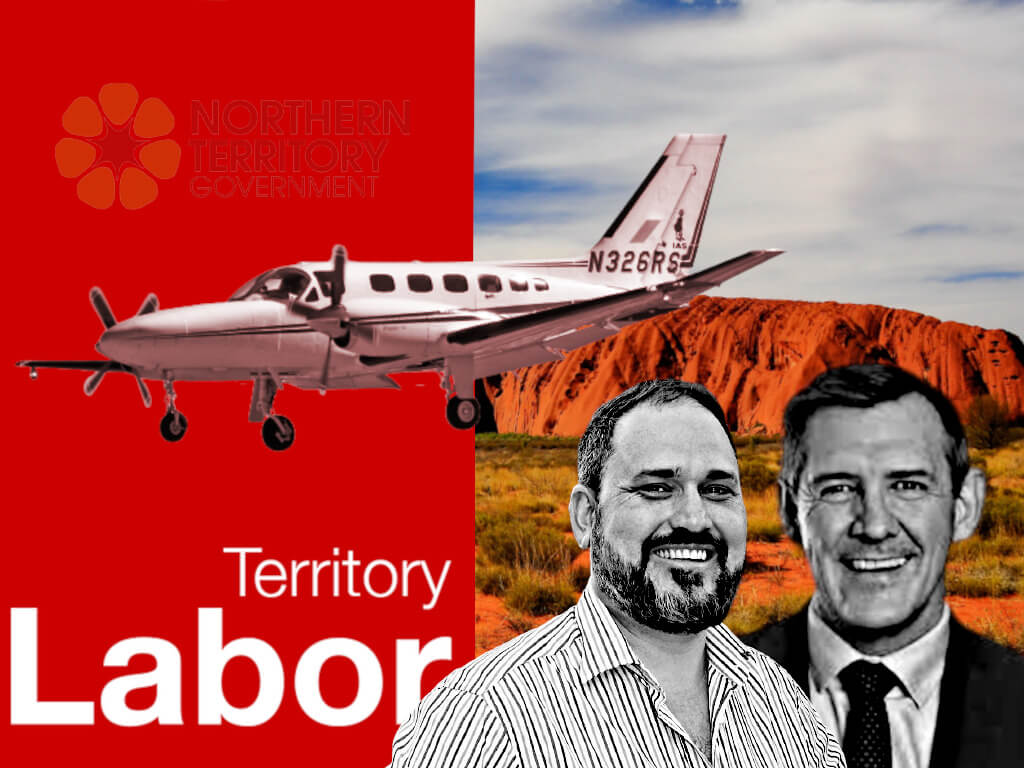 Internal government documents obtained under Freedom of Information laws reveal Mr Gunner charged taxpayers more than $40,000 for Labor campaign flights throughout the Northern Territory during the 2020 caretaker period, against established rules, approved by his brother-in-law and then-deputy chief of staff Ryan Neve.

The newly released records also show Mr Gunner billed taxpayers $15,000 for three charter flights with political advisers to remote communities in close electorates Labor was hoping to win – on the same day that remote polling was occurring in those communities.

The trips were officially claimed as “ministerial travel”, despite no record of meetings taking place.

In another instance, the documents show taxpayers paid $5,300 for a campaign photo op at Timber Creek for Mr Gunner and Aboriginal Affairs Minister Selena Uibo with Northern Land Council representatives to celebrate a fishing rights deal that had been signed one week earlier, before the government entered caretaker mode.

These trips are on top of $20,000 of taxpayer-funded trips Mr Gunner, his family and his advisers took ahead of the election that breached caretaker guidelines established to prevent the misuse of public funds on party-political campaigning, as previously reported by the NT Independent.

Mr Gunner’s brother-in-law Mr Neve approved the funding for the 2020 campaign flights while continuing to work in his taxpayer-funded position as Mr Gunner’s chief of staff at the same time he was heavily involved in the day-to-day operations of Labor’s re-election campaign, the documents show.

He was later given an executive-level job in the Department of Chief Minister & Cabinet after the successful re-election campaign.

The rules during the caretaker period – the time between the writ being issued and the result of the election being certified – specifically state that “NT Government resources should not be used to make announcements that involve party-political activities.”

There are also strict criminal laws that prevent misappropriation of public funds.

Under the caretaker guidelines, all ministerial expenditure is to be “assessed on a case-by-case basis by the Department of Chief Minister as the administering agency”.

The internal records show this did not occur and that the charter flights for political purposes were instead approved and managed by Mr Neve, one of the Chief Minister’s executive assistants Hannah Small, and the Chief Minister’s “director corporate services” Marianne Parris.

Department of Chief Minister CEO Jodie Ryan’s name did not appear anywhere in the travel requisition and approval documents obtained by the NT Independent, despite the rules specifically stating that the department must approve expenditure for ministers during the caretaker period.

‘Hi Ryan, can you preapprove?’: taxpayer funds approved in breach of rules

A year out from the general election, Mr Neve was shuffled from his public servant role as communications director for the Department of Chief Minister to Mr Gunner’s deputy chief of staff, operating out of the Chief Minister’s Office.

It was in this role, internal emails show, that he approved taxpayer funds to be used for the campaign trips.

“Hi Ryan, could you please preapprove $4500 for a charter flight Darwin to Timber Creek & return on Thursday August 6,” wrote Hannah Small, an executive assistant in the Chief Minister’s office.

The email was dated August 5 – the day before the proposed flight – with only one quote attached.

“Approved,” Mr Neve responded one minute after the email was sent.

This same process occurred for at least five of the seven trips during the caretaker period.

The documents obtained through FOI laws did not include who ordered Ms Small to arrange the flights, despite those details being specifically requested.

The approvals show Mr Neve remained in the deputy chief of staff role throughout the campaign period and did not take unpaid leave as most party-political operatives working on a campaign would. He has long been involved with Territory Labor, helping write many of its policies.

After Labor’s successful 2020 re-election campaign, Mr Neve was moved back to the department in a new role as executive director of “Team Rebound Implementation” on a new executive-level contract, estimated to be worth well in excess of $200,000 a year.

Despite caretaker rules stating that NT Government resources should not be used for party-political campaigning, the NT Independent previously revealed in March that Mr Gunner made “party-political” announcements during other taxpayer-funded trips, including a previously reported trip to Gunbalanya on August 5, where he told a crowd of residents and community leaders that they would receive a new health clinic if his government won re-election.

There was also a $16,000 trip to Alice Springs and Yulara with candidate Chansey Paech on August 5 that was billed to taxpayers against the rules, raising calls earlier this year for Mr Gunner and the NT Labor Party to repay taxpayers, which his office ignored.

The new documents, which were finally provided to the NT Independent eight months after filing the FOI applications, show Mr Gunner was in remote communities for what was referred to as “stakeholder engagement, face-to-face” meetings on the same days that remote polling occurred in those communities.

On August 18, Mr Gunner took a $6,250 taxpayer-funded charter flight to Galiwinku with senior political advisers Gerard Richardson and Cameron Angus, for the stated purpose of “face-to-face” meetings with “stakeholders”. It was listed as “ministerial travel”, but offered no details of which “stakeholders” Mr Gunner met.

Remote polling records show the NT Electoral Commission was holding mobile polling in Galiwinku on the same day between 1:15pm and 4:30pm.

The Territory Labor Party was in a hotly-contested political battle in the electorate of Mulka against independent incumbent MLA Yingiya Mark Guyula and were throwing all of their resources at the seat to reclaim it for former deputy leader Lynne Walker, which they eventually lost.

Mr Gunner arrived at noon the day polling started and left at 4pm. His meetings while on the ground were not recorded in the documents.

The next day, on August 19, records show Mr Gunner spent $3,750 of taxpayer money to charter another flight to Wadeye from Darwin, with the same senior political advisers, for the same stated purpose of “stakeholder engagement face-to-face”.

Remote polling occurred in Wadeye on the same day, between 8:30am and 4:30pm. Flight records show Mr Gunner arrived in the community at the centre of the hotly contested Daly electorate at 11:15am on polling day and left at 4:30pm – the same time the polls closed.

It was unclear if Labor candidates Lynne Walker and Anthony Venes attended the communities with Mr Gunner.

Taxpayer funds are also not to be used for candidates during election campaigns.

Trip to Minyerri on polling day with Uibo; mysterious flight to Katherine

Mr Gunner also travelled to the remote community of Minyerri by charter plane with his advisers on August 14 for $5,700, to meet with incumbent member for Arnhem Selena Uibo. 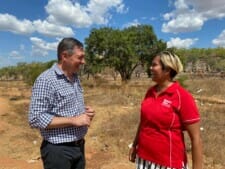 The NT Electoral Commission also happened to be conducting mobile polling that day in the Arnhem community.

Mr Gunner posted a photo of himself and Ms Uibo in Minyerri on his Facebook page two days later, as well as a political campaign pledge to expand the Families as First Teachers program – a remote community education program – but only “if Territory Labor is re-elected”.

Mr Gunner’s then-social media adviser Abi Rajkumar was also on the Minyerri flight with other advisers.

Ms Uibo and her chief of staff Robert Picton were not on the flight records, but internal travel documents show Mr Picton charged taxpayers to drive to Katherine – where Ms Uibo lives – four days earlier.

It appears Ms Uibo drove to the community and was not on the charter flight with Mr Gunner and his political advisers, however one name was redacted from the flight manifest in the FOI documents, with no explanation provided for the redaction.

In another taxpayer-funded charter flight, two days before the August 14 Minyerri trip, Mr Gunner and his team charged taxpayers nearly $3,000 for a mysterious flight from Darwin to Katherine for five hours. It’s unclear what Mr Gunner was doing in Katherine at this time, with the documents again stating only “meetings with stakeholders” during the election campaign.

All the trips to remote communities had hospitality expenses charged to taxpayers, although no receipts were provided to substantiate the claims.

Mr Gunner’s office refused to answer the NT Independent’s questions for this article. Mr Neve also did not respond to emails.