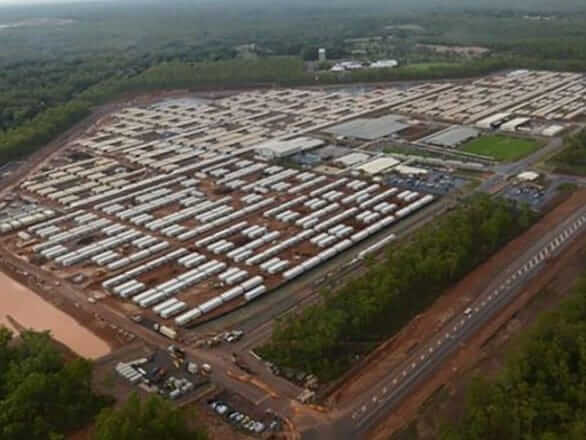 A man on a repatriation flight that landed in Darwin from South Africa last week has tested positive for the Omicron COVID-19 variant, the NT Government said, heightening concerns about mingling between security zones at the Howard Springs quarantine facility.

Health Minister Natasha Fyles said the man had been in quarantine at the facility since arriving in Darwin from Johannesburg on November 25.

The new strain case was announced the same day that two new local COVID-19 cases linked to the Katherine cluster were announced, and follows Sunday’s announcement that three more cases of COVID-19 were detected in people who appear to have caught coronavirus while in the Howard Springs facility.

The NT Independent first reported incidents of people in the facility entering the so-called “red zones” where infected people are being treated.

Police Commissioner Jamie Chalker and Chief Minister Michael Gunner confirmed the reports on Sunday, with Mr Gunner suggesting it “may be likely that they were exposed to the virus … as a result of family mingling at the centre”.

Security issues inside the facility have previously been raised, with criticism heightened after a 27-year-old man scaled a fence and into a waiting ute to hit the Darwin party strip on Friday night. He was later arrested.

Mr Chalker said on Sunday that while there were new positive cases from within the facility, he believed there was no risk to the community.

“The community can be very reassured that while we have some COVID positives, and there’s a significant number, they’re currently in the red zone,” he said. “That red zone is a very, very strict zone …”

On Monday, Ms Fyles said the South African man was being kept in a separate area and assured Territorians that the different zones at the facility were being monitored.

“So our international repatriations do not interact with any of our local community members, Territorians, who may be in the facility as a close contact,” she said.

The arrival of the Omicron variant was not cause for concern, Acting Chief Health Officer Charles Pain said, adding he was “not overly concerned”.

“We’ve dealt with variants all the way through this and we’ve managed those in exactly the way we are doing now,” he said. “So in many senses, it’s business as usual.”

The two local cases announced on Monday bring the total number of cases linked to the Katherine cluster to 58.

One of the new cases is a 17-year-girl from Binjari, who is a household contact of a previous case, and has been in the Howard Springs quarantine facility. The other new case is a 19-year-old Binjari woman who tested positive while in the Binjari community as part of the third round of testing conducted there over the weekend, who is now being moved to Howard Springs.