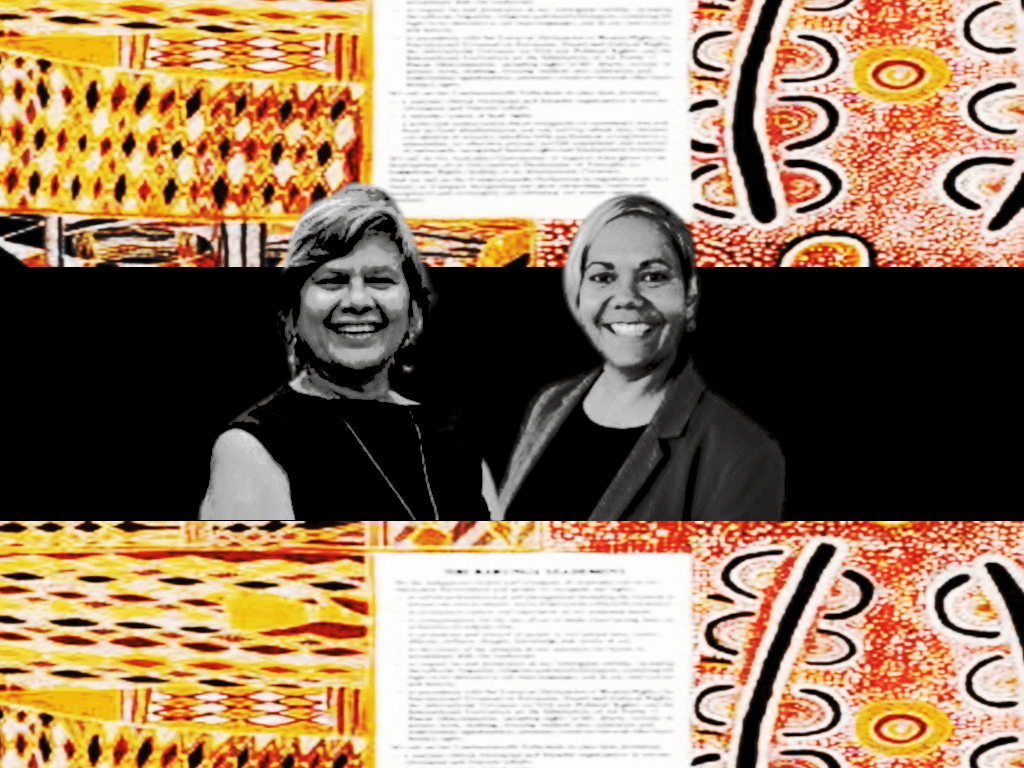 The NT Deputy Treaty Commissioner and Labor figure Ursula Raymond has said she finds it difficult to see the Gunner Government’s attempts to make a treaty with Indigenous people as legitimate with changes to youth bail laws she described as a “short term political game” which would see more young black people in jail, coupled with the Territory’s record in dealing with Aboriginal people.

Ms Raymond was speaking as a panelist at the Numangwwa-Gum – Treaty Now talk at the Garramalang Festival in Darwin on Saturday, along with moderator and Gunaikurnai and Wotjobaluk man Ben Abbatangelo from Victoria; Nyikina Warrwa woman from Fitzroy River in the Kimberley Dr Anne Poelina; and Larrakia and Anmetjerre man and head of the law and justice section of the North Australian Aboriginal Justice Agency, John Rawnsley.

Mr Abbatangelo framed the discussion by stating the panel would re-conceptualise how just agreement making with the oldest continuous cultures in the world could transform this continent like never before. 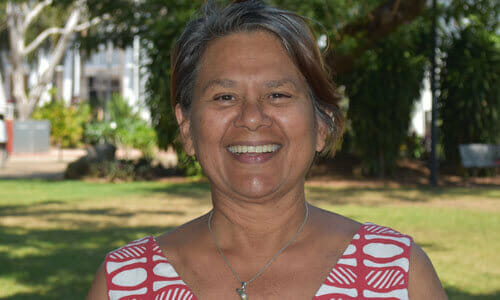 He said that as a visitor he found it difficult to reconcile that the Northern Territory Government could be the body preparing for a treaty when it had an “incredibly draconian rap sheet when it comes to the criminalisation and dehumanisation of Aboriginal and Torres Straight Islander people”.

However, he seemed to conflate some actions of the Federal Government with those of the Territory Government.

“We are fully aware of the Northern Territory intervention, the cashless debit cards. Just two weeks ago, I watched them pass through, yeah, a really wild set of legislation that’s just going to take kids from school to prison,” he said.

“We know about the horrific housing and polluted waters, the taking the kids away from their mother’s arms epidemic, right.

“I find it difficult to legitimise the government’s attempts to try and establish a road to treaty, whilst simultaneously their actions couldn’t speak any differently.”

Ms Raymond said she concurred with his statement and said with the law changes would see even more young people in prison.

“I totally agree. And it is difficult, especially when here in the Northern Territory they rammed through the, you know, those bail reforms, which basically now we have mandatory sentencing again,” she said.

“So we’ll have even more young people in prison.”

“What we’re saying is that we cannot have peace, when we are continuously confronted by warlike, colonial, intensive invasive development,” she said.

The Royal Commission into the Protection and Detention of Children 2017 report found 94 per cent of youth in jail in the NT were Aboriginal while a June 2018 NT Estimates meeting heard 100 per cent of the juvenile inmates were Indigenous.

Ms Raymond cited NAAJA managing solicitor for crime Beth Wild, saying she had told the media the government was the “parent” of kids out on the streets because they were in Territory Families-controlled home care.

“And so it’s the government. And then when, when the report of the Royal Commission [into the Detention and Protection of Children in the Northern Territory] was handed down into detention here, the chief, the current Chief Minister [Michael Gunner], when he accepted that report in Parliament House, he said the same thing.

“I’ve never heard a political leader say that before, you know that we are the parents that all these kids are in state care. 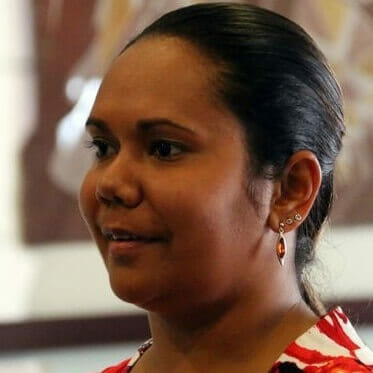 Treaty Minister Selena Uibo and Chief Minister Michael Gunner’s offices refused to answer questions about the comments and whether the positions of Ms Uibo – who is also the Attorney-General and Justice and Aboriginal Affairs Minister and has Nunggubuyu and Wanindilyakwa heritage – or Ms Raymond were untenable.

They also would not say if the minister would meet with Ms Raymond over her problems with the government’s legitimacy in negotiating a treaty.

Ms Raymond is a well known Territory Labor party figure having been appointed Deputy Treaty Commissioner in July 2019, after spending almost three years as an adviser to NT Labor Minister Lauren Moss, taking that post in the months after Labor was re-elected back into Territory government in 2016.

Before that she had spent four months as federal Labor Member for Solomon Luke Gosling’s chief of staff after a failed senate bid in which she was beaten out by factional rival Malarndirri McCarthy to replace Nova Peris who announced her shock resignation about five weeks before the federal election in 2016.

Ms Raymond was Ms Peris’s chief-of-staff and had.been a ministerial media adviser in the previous Henderson Government, losing her job after the CLP won back power in 2012.

The future of the Treaty Commissioner

The talk came in the wake of the controversy around Treaty Commissioner Professor Mick Dodson who is reported to have taken sick leave after allegations that he called an Aboriginal woman a “slut” and threatened to “knock her f**king lights out” during a football match in January at TIO Stadium.

Prof Dodson has so far resisted pressure to resign from his high paying job, despite Mr Gunner writing to him to express that the government has lost confidence in his ability to do the job, but only acting after the allegations were made public.

His name was not mentioned during the panel discussion nor was there any discussion about whether he should or would continue in the role.

Mr Gunner’s acting director of communications Jamie Collins would not answer questions about whether Mr Dodson had now resigned, had promised to resign or whether Mr Gunner would take it to a vote in the Legislative Assembly to have the Administrator remove him. Nor did he answer if he would have to be paid out if he either resigned or was removed. He earns $290,000 a year, paid through a private consulting company.

Dr Poelina said there was not peace between Aboriginal and non Aboriginal people in parts of the country with warlike invasive development on Indigenous land and that Australia needed to look at what truth, justice and equity looked like for Indigenous people across the nation.

“What we’re saying is that we cannot have peace, when we are continuously confronted by warlike, colonial, intensive invasive development,” she said.

“So this is a conversation not of peace…but a conversation where we as Indigenous leaders are standing in solidarity, to say ‘We need a new way to redefine what our nation is really intent on doing’.

“So we have to move away from the warlike invasion, we need to come to a platform of political goodwill, that we will continue to have this dialogue and together as Australians, frame the framework for both the treaty and the national level, but the territory level at the Victorian level, and any other state level that is brave enough to take on this conversation.

“So we are also coming today with solutions of how we move forward in this declaration of peace.” 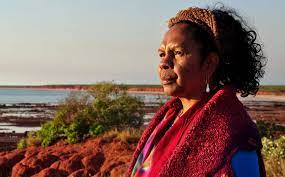 Ms Raymond said she believes the frontier wars still continued in a way.

“…That war of invasion, and I think that continues, has continued since colonisation,” she said.

“And one of the things in that question you put Anne was what are the ways we can get around that.

“And Anne expressed that was that we have to decolonise our minds, and not just Aboriginal people, but so do non-Aboriginal Australians as well.”

Dr Poelina called for the total reform of the regional system of governments because of the failures but was not specific about what these reforms should be. She said it was not about amalgamating local councils together.

“So when I talk about justice and equity, I want people to understand that what we’re talking about is rights, property rights in this country, we know our lands and waters were taken by theft, ” she said.

“And we want to move past that three treaty process or any form of just decision making and just development making.

“So I believe in hope, I definitely believe in justice and freedom. For me, equity means we own these resources, we have managed them from the beginning of time, as the first farmers, the first architects, the first engineers, we understand that system, we own them and it’s time for the nation to wake up and realise that if we’re talking about shifting Aboriginal people from poverty and despair, then there needs to be a realisation of what equity means.

“And that means how do we do business in the regions with the recognition that Aboriginal people are not stakeholders, we are owners, and managers of our state and resources.”