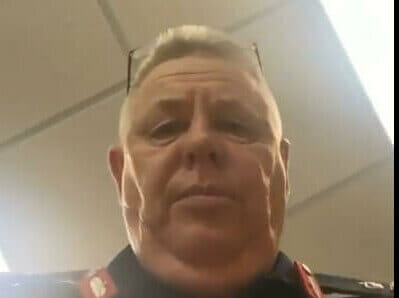 Deputy Police Commissioner Murray Smalpage has issued an apology after “inadvertently” recording himself suggesting that a group of police officers should be called a “murder” and live-streaming it to Facebook.

The video, which has been shared widely on social media over the weekend, shows Mr Smalpage walking into a meeting where other officers appear to be discussing what a group of police officers should be called.

“I think a mess of officers sounds good,” a female police staff member is heard saying.

“A murder, ha, ha, ha,” Mr Smalpage said before walking down the hall to another meeting while live-streaming everything on his phone directly to Facebook Live.

He could also be heard discussing pay rates with another officer, when someone says “I could always afford to get paid more”.

The video concludes with Mr Smalpage entering another meeting with the head of NT Police’s Professional Standards Command Bruce Porter.

NT Police released a statement just after noon today, attempting to explain the video after members of the public and rank-and-file officers expressed disgust at the “murder” remarks.

The unattributed statement suggested that “the video was inadvertently recorded by Deputy Commissioner Smalpage on his phone as he was walking to a meeting and was posted to his Facebook page, and then shared by others”.

“The video includes remarks by Deputy Smalpage as part of a conversation on the way to the meeting,” the statement from an unnamed police spokesman said.

“Deputy Smalpage said he apologises for any offence that may have been caused.”

Mr Smalpage is quoted in the statement as saying:

“In no way were the comments intended to be in the context that some others appear to be directing them,” he said.

“I am deeply committed to the Northern Territory police force and all its members.

“Our members work incredibly hard every day to serve and protect our community.

“Again, I apologise if my remarks were construed in any other way than as part of a chat before getting down to the business at hand.”

The comments made in the video have upset some officers, given that NT Police Constable Zach Rolfe is in the process of a long, drawn-out and delayed murder trial for the shooting death of Kumanjayi Walker in 2019.

Officers the NT Independent spoke with said Mr Smalpage’s position is now “untenable” and that “consequences should flow” for his comments.

“This just goes to show … the upper echelons of the executive where what’s good for thee is not good for me,” one officer told the NT Independent.

“To make fun of a police officer who is on trial for his life … is the most disgusting and despicable act and the deputy commissioner of police should’ve known better.

“But time and time again, he shows that he doesn’t care for members on the front lines and only for himself.

“His position is untenable and he should resign in disgrace or be dismissed for breaching his own social media policy.”