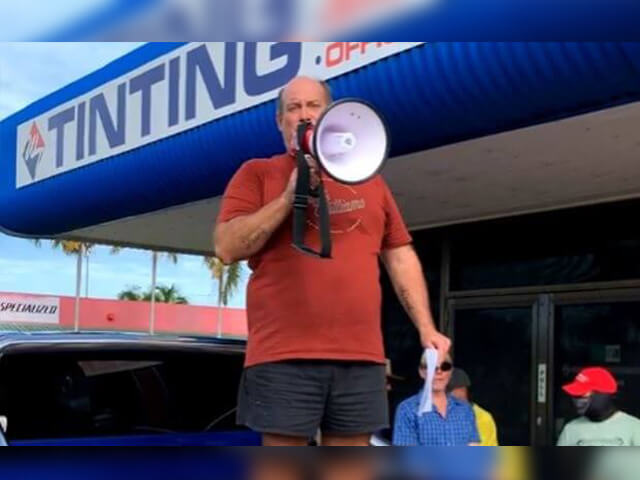 A Territory business at the centre of a vaccine fight with the NT Government has had their calls for support answered, with more than 100 people showing up to protest the government’s COVID-19 vaccine policy Monday morning.

Windscreens Territory was ordered by NT Police to close on Friday after reports that staff were in breach of Chief Health Officer directions, including not wearing a mask and allegations the owner and staff were operating the business without being vaccinated.

But when the shop opened on Monday, people had gathered to show their support for the Coconut Grove business, calling for the government to end its vaccine mandate.

The rally included members of the “Free in the NT” group that has been protesting the vaccine mandate for months.

Windscreens Territory owner Steve Arrigo told the crowd that he could not understand why the government would be forcing him to close his business.

“Our community all throughout Australia is getting divided [over] a vaccine or a jab,” he said during the protest.

“I’m just a simple bloke. I don’t know how you can restrict me from walking around – that to me is – I can’t get my head around that.

“I’m perfectly healthy to come to work, to earn a living, and provide for my family.

“I really struggled what people don’t understand about that because I’ve done nothing wrong.

“I had a choice not to take the jab.

“How can I be restricted to move around or work or provide for my family?

“If they’re passing rules or regulations that we believe may not be truthful and lawful, I will stand here all the way for all Australians.”

Ms Read also alleged that the business did not keep a vaccination register.

NT Police also alleged that Mr Arrigo and two staff at the business were unvaccinated.

Police said they were issued infringements but did not go into detail on the specifics of the alleged violation.

Mr Arrigo said he will raise the issue of the Gunner Government’s “unlawful” closure of his business with the government.

“I will be sending this off and I will be asking them in a response with evidence in the next seven days,” he said.

During the protest, he told supporters that authorities addressed the notice to close the premises to a bloke named “Greg.” However, he said there’s no “Greg” working for them.

Mr Arrigo also said authorities ordered his business shut on Friday, but it was actually already closed on Friday.

NT Police say no issue with protest, cannot explain why unvaccinated people assembled during a lockout

At a press conference on Monday, acting Territory Controller Michael Murphy said the NT Police attended the protest at Windscreens Territory to ensure all participants obeyed the CHO’s directions.

He became unsure when asked how unvaccinated people assembling while Darwin was in a lockout could be considered to be in compliance with health directions.

“It was a peaceful protest that only lasted over an hour,” he said. “And there was no issues from Northern Territory Police.

He then added, when questioned about the lockout: “And in saying that, obviously too, there’s some inquiries that need to be undertaken about lawfulness, satisfying the reasons to leave the house. Everyone’s got a right of reply”.

Chief Minister Michael Gunner’s social media post on Friday about the business closure that he said was “a gut punch when you see the selfish few break the law” — drew a backlash from Territorians, with thousands of comments criticizing Mr Gunner’s outing of the company and what people called his continued efforts to divide the community.

“I am angry, every Territorian would be angry that after almost two years people still don’t get it,” Mr Gunner’s Facebook post stated.

“We are chasing every lead on anti-vaxxer law breakers – if you know anyone else who is acting selfish let us know, we take it seriously and will slug them hard.”

Jarrod Carman commented on Mr Gunner’s post saying: “The person that doesn’t seem to be getting it is you Michael Gunner. The gut punch is that after 2 years you have not looked into the damage that government overreach has done to the people they are meant to serve.

Territorian Carrie Russell also commented saying: “They are not an anti-vax business they are a business that is making a choice to open their doors to any customer vaccinated or unvaccinated, since when does a vaccination make a person superior?”

Mr Arrigo could face fines of up to $5,024 for individuals and $25,120 for the business if found to have breached the CHO directions.