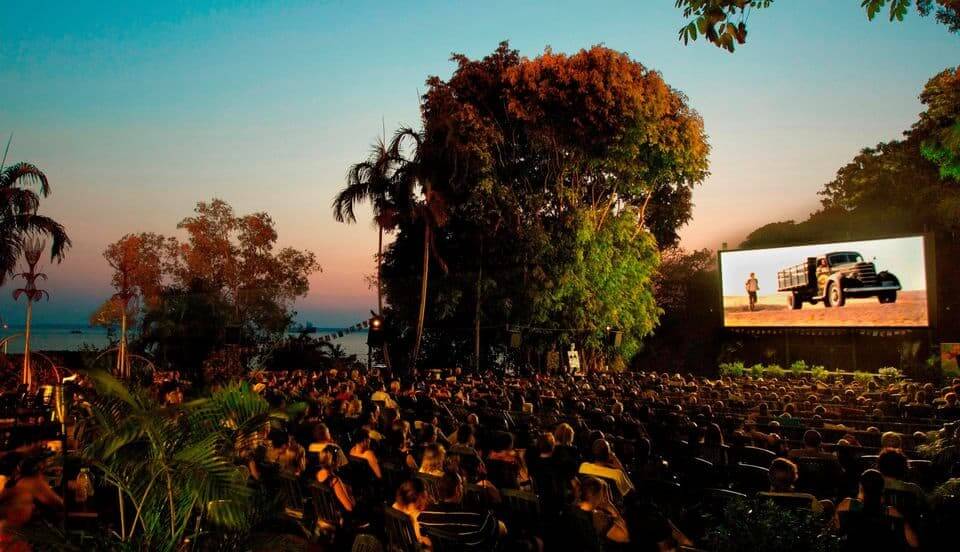 The Darwin Deckchair Cinema is calling on its members to turn up to tomorrow night’s Darwin Council meeting as a protest against the RSL’s proposed Esplanade development which the council has given in-principle support to.

Cinema manager James Parker said more than 11,000 people have signed a petition opposing the proposed RSL clubhouse, slated to be built less than 100 metres from the cinema screen.

“People don’t want to see commercial interests go ahead, so we’ve asked our members to attend the council meeting to show their support,” Mr Parker said.

The Deckchair Cinema says the iconic institution and tourism attraction is under threat from severe noise disruption.

In 2018, the RSL’s Cavanagh Street clubhouse burnt down, rendering its more than 2000 plus members without a permanent home.

Darwin RSL president Stephen Gloster last week said the Esplanade was just one of the location’s on the table for consideration, as the club faced backlash over the development.

Reversing his long-held position the Esplanade was the only economically viable option for a new clubhouse, Mr Gloster said the RSL was considering rebuilding at the Cavanagh Street site, despite not having any plans to back the idea.

However, an official proposal from the RSL to develop Defence of Darwin House on the Esplanade is now before the Darwin City Council.

Mr Parker said he is disappointed the Darwin City Council is providing its support for the plans, outlined in council documents.

“Alarmingly the [Darwin City Council] CEO and administration thinks this proposal should go ahead,” he said.

“We presented our petition to parliament and the council, yet they obviously haven’t taken this into account.”

Mr Parker said the Deckchair Cinema has seen a surge of support this year in memberships.

And despite the coronavirus pandemic’s major impact on tourism, more than 50,000 people have flowed through the gates this year, an increase on 2019, Mr Parker said.

“We’ve been greatly supported by members because they see the threat, and they see the value in the Deckchair as a tourism attraction and an important institution.

“The plan involves building a club only 80 metres from our screen, that means cars coming and going, people, bins being emptied.

“These would have a very big impact on the cinema – everyone knows how much of an impact a phone ringing has during a film.

“This will be much worse.”

The Darwin RSL is officially seeking in-principal support from the council for its proposal for Defence of Darwin House, and the matter will be debated tomorrow night at the council’s bi-monthly meeting.

It will be recommended that alderman provide support for the plan, on the condition the RSL undertake all necessary planning and regulatory requirements, including a public consultation.

“A proposal has been put forward to look at relocating and constructing a new facility at the Esplanade car park site adjacent to the cenotaph, with the purpose of providing a community and tourism prospect to further complement and promote Northern Australia’s military history,” council documents state.

“It is recommended that council provide in-principle support to the RSL Darwin Sub Branch for the proposed development of a Defence of Darwin House.”

In its proposal, the RSL states the Esplanade location is the “most appropriate location from which we remember those who served and suffered in defence of our nation”.

“Open to all, it will provide an educational and interpretive centre that significantly enhances the site’s commemorative importance. It will also provide a meeting place for ex-service people on those occasions they come to remember.”

The proposal states the clubhouse will be a two-story development with an “open shady verandah and sweeping views of the harbour”.

“The design team, headed by Hully Liveris, has commissioned a noise study. The RSL intends that detailed design incorporates noise minimisation to the north-east, south-east faces.

“In a wider sense, it will build a reputation as a must-see venue for our visitors and those interested in Darwin’s special place in our defence efforts.”

Darwin Film Society chairperson Jeff Coulter, has penned a letter to the Darwin Lord Mayor Kon Vatskalis outlining the society’s deep concerns about the future of the cinema.

“We are aware of your strong support of the proposal, but we ask, once again that you please take into account the consequences of placing a licensed club on this site,” the letter, dated Monday October 12, states.

“Apart from what many in the Darwin community see as the inappropriateness of the development on the site for cultural and environmental reasons, it will be the death knell of Darwin’s prime tourist attraction – the Deckchair Cinema.”

In his letter, Mr Coulter says the “beauty and ambiance” of the harbour-side cinema is in jeopardy and the development is contrary to the City Deal.

“None of the meetings with either you and your staff or RSL management and its architect have given the Darwin Film Society any comfort or indication of understanding by those parties of the significant role Deckchair Cinema in its current position plays in Darwin’s offering to residents, businesses and visitors.

“What has consistently been suggested is compromise. Compromise on the part of the Darwin Film Society to accept that Darwin’s premium tourism attraction will be destroyed, and a successful business ended.

“We ask that you, as Lord Mayor, and an advocate of local business, stand up for this established business that is held in high esteem by so many.”

The Darwin City Council was contacted for comment on why it plans to back the decision, but did not provide an answer to the question.

The council meeting will take place on Tuesday at 5.30pm at the Darwin Civic Centre.