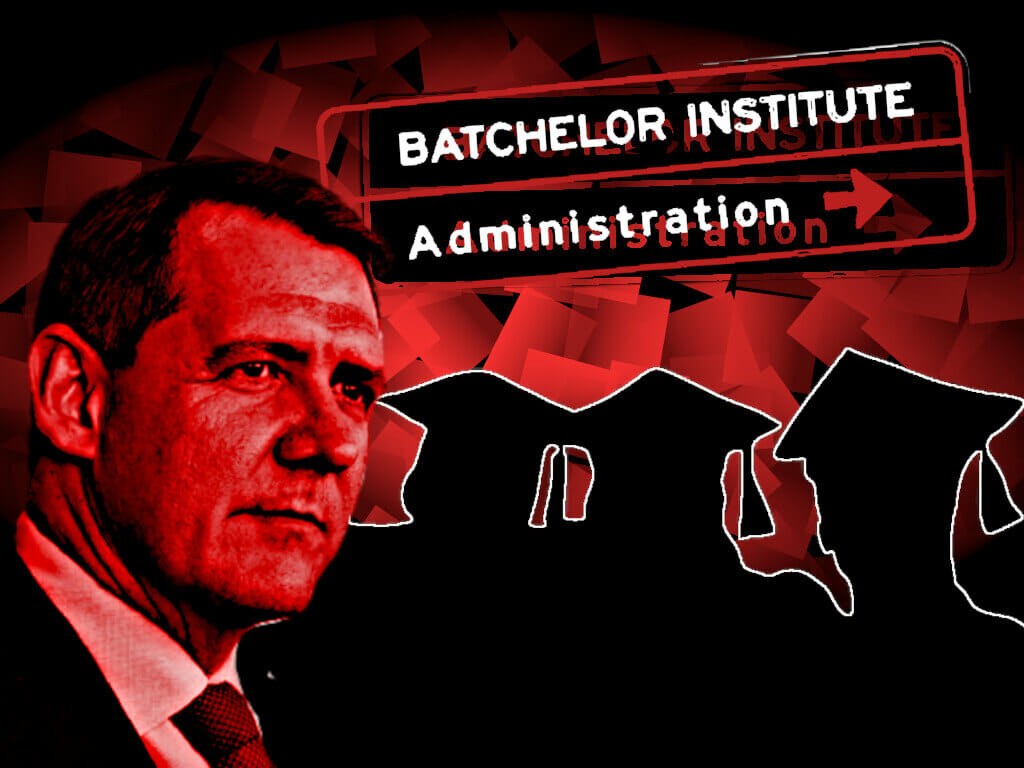 EXCLUSIVE: A report that outlined credible allegations of ongoing fraud and misconduct at Batchelor Institute was given to Chief Minister Michael Gunner’s office in late 2019 – after it was requested by a senior ministerial advisor – but it appears the office took no further action, the NT Independent can reveal.

The report was written by a whistleblower at the institute with knowledge of the internal workings at the troubled training college, which detailed 33 serious issues, including allegations that fraudulent qualifications paid for by governments were being handed out to staff, alleged rampant bullying and nepotism by some of the executives, executive contracts not being valid, and that the institute was considered by the Australian Skills Quality Authority of being at “high risk” of not meeting its national training accreditation obligations.

There were also allegations of stolen equipment, claims the institute was spending more money on executives than instructors, employed unqualified staff and that it could not provide student numbers per qualification awarded.

Mr Gunner’s media advisor Maria Billias refused to answer questions about what action the Chief Minister or his senior staffers took after becoming aware of the serious allegations.

Politicians and public servants are required by law to report allegations of misconduct, corruption and unsatisfactory conduct to the Independent Commissioner Against Corruption.

In February 2020, Mr Gunner told media he passed documents to the ICAC uncovered by the ABC under FOI laws that revealed his former chief of staff Alf Leonardo’s involvement in the Darwin Turf Club grandstand, which was the subject of a corruption report this year.

But the Chief Minister’s office refused to comment on whether any similar disclosures were made to ICAC regarding the allegations made about the Batchelor Institute at the time.

The NT Independent is aware of at least eight internal or external investigations, reviews or audits, at the institute since about August 2017, that examined all aspects of management, allegations of corruption, gross financial mismanagement, bullying, nepotism, and its toxic culture.

In 2018, when Selena Uibo was Education Minister, a union source said she was also given a detailed report of the state of the institute, which was followed up in a face-to-face meeting, which included accounts of corruption, bullying and nepotism, and serious and repeated failures of financial, structural, and operational management.

“Did any of the executive management decisions meet the requirements of the legislation that established Batchelor?” a source said.

“Or the fiduciary recommendations of Deloitte, or their own internal institutional guidelines?

“There were financial, structural, operational, and delivery failures, aside from absolute unacceptable levels of bullying.

“Then there are the questions of who knew what? And who was there to watch given Batchelor’s repeated problems over the decades?”

The NT Independent has been told by several well-placed sources that the ICAC did eventually investigate the Batchelor Institute based on information it inherited from the former Office of Public Interest Disclosures and produced a report which has not been released.

An Office of the Independent Commissioner Against Corruption spokeswoman did not answer questions put by the NT Independent about the existence and nature of the report, instead announcing on September 25, that it was currently “reviewing” the institute to determine whether improper conduct has occurred or is occurring.

The ICAC and the institute both issued press releases about the “review” within minutes of each other after receiving questions from the NT Independent. 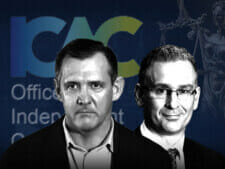 The 2019 whistleblower’s report, seen by the NT Independent, contains allegations of a spike in recognised prior learning (RPL) qualifications within staff in 2016, prior to former CEO Prof Steven Larkin starting in the job. A small audit of six staff found none of the assessments were valid.

Another document seen by the NT Independent and sent to Prof Larkin at the time, states there were credible concerns raised that because of fraud within the recognised prior learning system, some of the qualifications obtained by students would not be legitimate because their instructors were not properly qualified.

The report gives a detailed account of an instance where one trainer was identified to not have the required qualifications to teach, but nothing was done about it.

In another detailed account of alleged RPL fraud, a manager and a subordinate assessed each other for RPL, which was against the rules, and without proper supporting evidence. These were for Certificate III, IV and possibly Diploma level, even though one of those involved was holding a PhD.

“The assessments were invalid through lack of any evidence portfolio, the immediate boss-subordinate relationship and other issues,” the 2019 report said.

“[Name redacted] withdrew his complaint to ASQA after an assurance from [manager’s name redacted] that the qualifications based on the invalid RPL assessments would not be issued.

“Unfortunately this did not occur as at least two qualifications were issued to [names redacted].

The report states the RPL kits for those staff members confirm that this note is untrue as their signatures and names appear on both sets of RPLs.

The NT Independent has seen copies of those RPL documents.

The manager who oversaw the RPL is said to have offered his resignation but instead was made the contact person for the ASQA audit, the report said.

The report also highlighted the practice of Batchelor staff being used to increase numbers of students by being recorded as RPL students may have stopped, but it could not be guaranteed.

“Essentially the practice was a device to increase student numbers and to access NT and Commonwealth Government funding,” the report said.

“In some cases the qualifications being RPL’d were at lower levels than those nominally held by the RPL applicant e.g. a Diploma holder or even higher qualification holder would do an RPL at Certificate III or Certificate IV.

“Sometimes with limited or no evidence portfolio being prepared.”

There were also significant funding problems because Batchelor did not provide the agreed training to students under a contract, the report found, and it “either needed to be made good or paid back”.

The 2018 annual report shows the institute lost 687 Vocational Education and Training students with the decrease said to be caused by $2.6 million withheld in funding from the NT Government’s Trade, Business, and Innovation Department because of “non-attainment of training targets”.

All Batchelor executives’ contracts invalid, along with other serious EBA breaches: Report

The 2019 report highlighted multiple problems with the institute not complying with the enterprise bargaining agreement including the entire Batchelor executive contract arrangement being invalid.

“The contract executive arrangements had been established on an incorrect basis and could not simply duplicate the NTPS arrangements which rely on executive contract officers being non-award or EBA covered, and subject to specific Commissioner for Public Employment determinations under the Public Sector Employment and Management Act,” the report stated.

The report said critical changes to the contract wording were required to offset EBA and other entitlements.

Other serious EBA failures were listed as: non-payment of severance to departing fixed term employees; non-payment of long service leave to all departing employees (the EBA provides for all employees to be paid out long service leave not the more usual after seven years of service); routine over use of 12 week casual contracts; non-payment of weekend Saturday-Sunday penalty payments to Defence mentors;  excessive periods – six to 12 months – of higher duties paid to avoid recruitment and competitive selection; and so-called problem staff being moved from position-to-position.

In July 2018, Prof Larkin and another executive released a proposed restructure for comment, the report states, and about 13 staff were to be relocated to other positions.

It said under the EBA employees could seek voluntary redundancy in certain circumstances involving loss or transfer of position, but none of them had been spoken to by their immediate manager or seen a proposed or settled role description.

The report stated that no further action was taken, and that “many of the staff still do not have duty statements or job descriptions”.

There were other very serious issues raised but were given less detail in the briefing report, which the author said were also not followed up.

“Preferential priority appointment of Indigenous applicants (is) being routinely misused and (there are) repeated attempts to by-pass merit selection processes and rules,” the report stated.

“…Some minor modifications to require declarations of conflict of interest in relation to family and acquaintances (were enacted) but essentially policies on conflict and codes of conduct are fine they are just selectively applied.”

Other issues raised in the report include a significant under-spending and over-charging of a Corrections Department project including alleged cases of nepotism and appointment of unqualified staff by a manager.

A house framing and trussing machine purchased by the institute for the Corrections project was “liberated” by a staff member from a shed, the report stated, which was later retrieved but with no action taken to find out how it got from Corrections to the shed.

The report also stated that no actual student numbers per qualification were available in 2019, nor was there any cost benefit assessment done of what programs were being offered.

It also highlighted that corporate support staff costs were higher than training staff costs, with no staff-to-student ratio fixed, while staff numbers in hospitality, maintenance, and kitchen were fixed, irrespective of students in residence numbers that some days saw more staff than students.

The author of the report told the NT Independent there was no official follow-up with him from the Chief Minister’s office, and Ms Billias did not respond to detailed questions about what action the government took in response to the serious allegations reported directly to ministers, contained in annual reports, detailed news articles, and briefings that would have taken place by the Education Department heads who were on the board of the institute.

An independent analysis of the executive team in the months following the report showed no suggestion there was any intervention by the Gunner Government and now departed CEO Prof Larkin stayed in his job.

He had taken on the top job on March 26, 2018, brought in after two interim CEOs, to replace Professor Robert Somerville who was reported to have resigned on August 25, 2017.

The OICAC acknowledged the formal referral from a complainant, not connected with the Chief Minister’s office in the middle of 2019, but the NT Independent understands the anti-corruption watchdog did not start investigating the Batchelor Institute until February this year, with the report yet to be released.