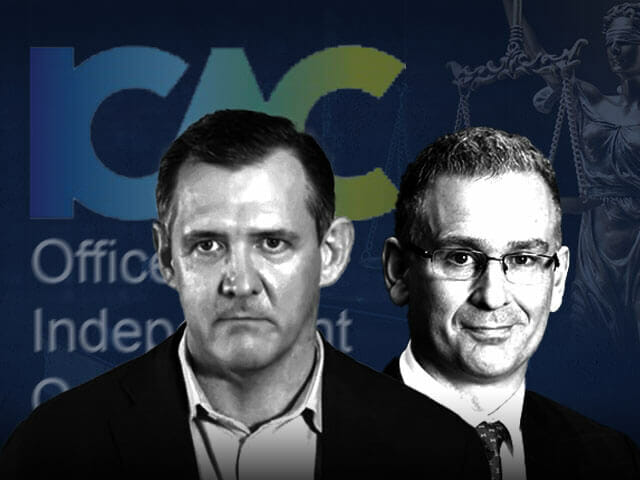 ANALYSIS: While the Gunner Government was establishing the NT’s Office of the Independent Commissioner Against Corruption in 2017 – as part of their election commitment to “restore integrity” – a Labor-run parliamentary committee made a modest proposal: that NT politicians be excluded from being investigated by the anti-corruption body.

Then-attorney general Natasha Fyles said she was actually considering the proposal before Chief Minister Michael Gunner read the room after being caught and was forced to denounce the recommendation, saying on Twitter that “politicians won’t be exempt from the Territory’s first ICAC”.

“Concerns about pollies are one big reason why we need an ICAC,” he said.

Four years later, the Gunner Government is currently reviewing the ICAC Act behind closed doors with the intention of making changes that will affect how the ICAC functions.

Gunner has repeatedly refused to release the terms of reference and rejected calls for a public hearing into the review, led by former NT public servant Greg Shanahan, in a deliberate effort to keep Territorians in the dark about what the government is looking to monkey with.

But if recent events in South Australia are anything to go by, expect the review to fundamentally weaken the NT ICAC. And despite what you may think of the former commissioner, that is not good for the Northern Territory.

Expect to see investigative powers for some serious misconduct allegations against public servants taken away from the independent body in favour of sending them back to departments to handle – the very place this kind of conduct has been allowed to fester for decades.

And expect parliamentary privilege to be strengthened to protect NT politicians from being investigated.

This will play well with the prevailing public sentiment that the independent corruption watchdog has failed in its short existence and is in line with Gunner’s MO of quietly and methodically removing the checks and balances established in western democracies to keep a sitting government accountable to the public.

This comes after killing the policy scrutiny committees that gave the public and all MLAs the ability to review legislation before it was introduced to Parliament and follows the banning of the free press, limiting independent MLAs to one question per sittings week, killing debates with their numbers, the constant objections during Question Time and other measures that avoid accountability and run contrary to that old “restoring integrity” pledge.

If you want to know where this secret ICAC review is going, it would be helpful to look first at what happened in South Australia last week while the rest of the country was focused on Gladys Berejiklian’s resignation.

SA ICAC Ann Vanstone made a rare media appearance to condemn the SA Government for its efforts to “decimate” her powers to investigate corruption after passing sweeping reforms to how the ICAC operates, which included removing the ability for her to investigate “misconduct” and “maladministration” in favour of handing those allegations to the Ombudsman.

But even the SA Ombudsman Wayne Lines came out to say he could no longer investigate misconduct properly because the government had narrowed the definition too far.

And both integrity bodies agreed the SA Lower and Upper House pulled a fast one by strengthening parliamentary privilege to protect politicians from being investigated.

This is the legal immunity elected members have when discussing matters with constituents and the ability to use Parliament to say things that would get them sued outside.

Privilege protections were also raised in Labor MLA Mark Turner’s sex scandal, that is currently under investigation by the ICAC. He apparently is still the Member for Blain and as such has parliamentary privilege, although that appeared to be waived somewhat by the Gunner Government earlier this year at the request of the ICAC when they accessed his phones and computers under the condition that they not access any documents that are legitimately protected by parliamentary privilege.

Gunner was already well on his way towards implementing whatever secret recommendations the Shanahan Review might offer to keep politicians and public servants safer from independent investigations, when last Friday, NSW Premier Gladys Berejiklian announced her shock resignation following revelations the NSW ICAC was investigating her approval of millions in public funds to help her secret MLA boyfriend in his electorate while she was Treasurer.

Seeing a truly popular state premier like Berejiklian resign over an ongoing corruption investigation would have made Gunner nervous.

However, putting the institution of government, and more importantly the electors, ahead of personal political ambition has never been a highly valued principle in the Northern Territory Parliament.

Even as the waves from the damning ICAC report into the awarding of $12 million of public funds to the Darwin Turf Club for the notorious grandstand started to lap up on Gunner’s doorstep, he accepted no responsibility for his role in getting Cabinet to approve it and blamed his former chief of staff and everybody else involved.

While the ICAC confirmed he did not investigate Gunner or any ministers’ specific involvement, and also respected cabinet in confidence traditions, there was enough in the report to raise questions and sound alarm bells for potential future investigations.

Current NT ICAC Michael Riches, who was the deputy ICAC in SA before taking the lead role here in July, already seems to know what’s coming and his recent comments appear to foreshadow the removal of misconduct and maladministration in the NT public service from the ICAC’s list of things to investigate.

He most recently said in the OICAC’s annual report that he would be focusing on “the most serious or significant allegations of improper conduct” and would not investigate “misconduct or unsatisfactory conduct except in exceptional circumstances”, choosing instead to let departments where the corruption has occurred investigate its own.

What this actually means for investigating misconduct in the NT public service remains unclear. Who was investigating this before? Apparently nobody.

Riches’s new approach is a less-is-more attitude after three years of NT ICAC investigations that have failed to result in any charges against anyone, a couple massive stuff-ups along the way, court challenges to the grandstand report and a disgraced former speaker claiming around town that she won something by avoiding being charged for lying to investigators.

And because of all that, the NT News, Brett Dixon, the disgraced former speaker and a long line of unpopular former pollies have jumped on board to decry the Office of the ICAC as inefficient, a waste of money and ineffective – an agency that should be scaled back or shut down because the NT just doesn’t need this sort of scrutiny after decades of unchecked corruption.

The fact that organisation and those people have issues with the ICAC is probably more a sign they’re afraid of what’s to come, more so than for the failures of the previous commissioner. What we’ve learned is that the ICAC’s shovel isn’t big enough for the piles of crap that have been spread all over the NT for years.

A government with a guilty conscience that once outright tried to make itself exempt from being investigated, that avoids questions, that cancelled parliamentary sittings to avoid scrutiny and is currently dismantling the institutions of the Westminster system to suit their own ends won’t miss the opportunity to capitalise on the prevailing public sentiment that something’s wrong with the ICAC to serve its own needs and further weaken accountability measures.

The NT still needs a strong ICAC to restore trust in the systems that have been corrupted for too long in the Northern Territory and if they can’t do it alone then other solutions need to be found, rather than just removing responsibility.