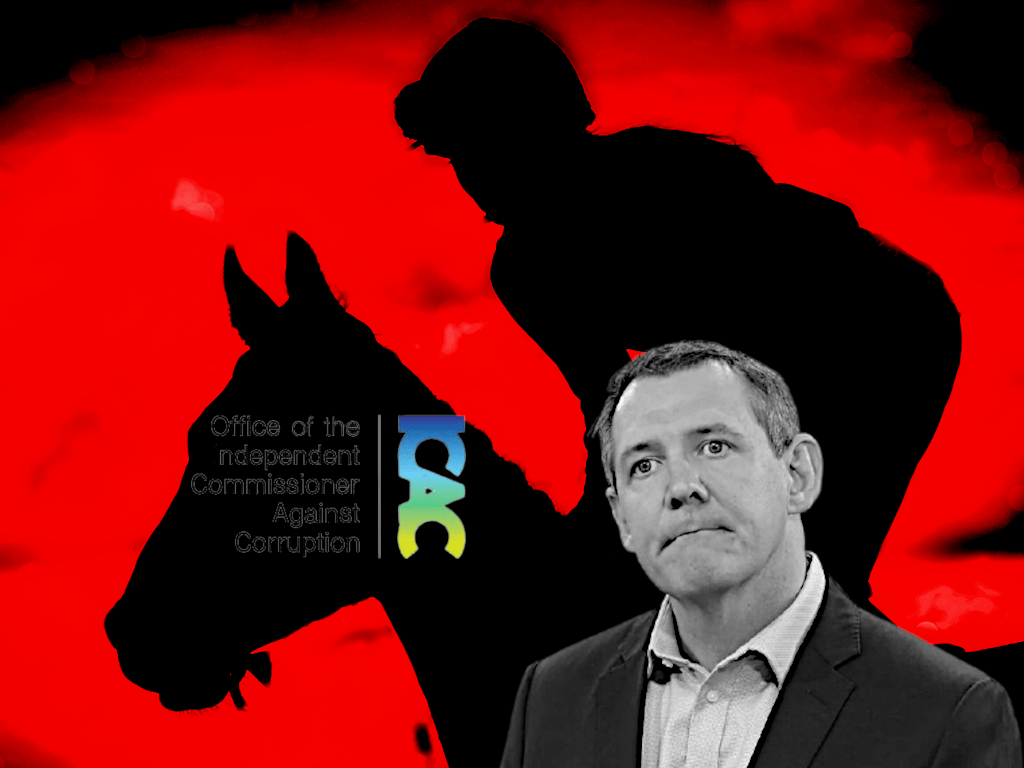 Chief Minister Michael Gunner has called on the Darwin Turf Club board to resign in the wake of the explosive ICAC report on the club’s grandstand, that he and his Cabinet gave $12 million to build.

That was despite the grant approval being based on a letter by chair Brett Dixon that “gave vague details and inflated, inaccurate or absent economic and employment claims.”

Mr Fleming’s report also found failures in the senior ranks of the public service on all fronts, including a “duplicitous process” to secure the funding “that was utterly lacking in transparency”.

He found Mr Gunner’s former chief of staff Alf Leonardi had a “close relationship” with Mr Dixon, which involved a promise to Mr Dixon to increase funding to the racing industry, and Mr Dixon then making two $50,000 donations to the NT Labor Party in the lead up to the 2016 NT election through various companies.

“Mr Leonardi was involved throughout the process, lobbying on behalf of Mr Dixon, advising him of what to write … where to send his [grandstand] proposal, and providing his own personal assistance in several ways, including, in his words, ‘waiting for the right time to pounce’,” the report said.

Media reported Mr Gunner repeatedly told journalists at the press conference today that he was unaware of any deals between Mr Leonardi and Mr Dixon to get Cabinet to agree to fund it.

Mr Leonardi was one of five people ICAC found had engaged in improper conduct.

Opposition Leader Lia Finocchiaro said in a statement it was “absolutely mind-blowing” that Mr Gunner thought he had “dodged a bullet” from the report, which she said tied him directly to corrupt behaviour in his office.

“For three years, Michael Gunner’s chief of staff, Alf Leonardi, was involved in backroom dealings to set up this $12 million taxpayer funded project so it is entirely implausible that throughout those three years Michael Gunner had absolutely no knowledge of any of the workings of the deal,” she said.

“The chief minister’s pathetic justification of ‘I was lied to’ is like the boy who cried wolf all over again. It’s the exact same excuse he tried to use during the Labor ‘cocaine sex’ scandal. Well, Territorians aren’t buying it.

“Ultimately, it was the Labor Cabinet who made the decision to award the $12 million dollar grant. If they didn’t know anything about the workings of the deal, why did they approve the spend?

“Territorians don’t believe Alf orchestrated this complex and sensitive proposal on his own without the knowledge of the chief minister.”

What is the government doing about it?

The Chief Minister said he had agreed in-principle to 18 recommendations from the ICAC report.

As well, he said the $12 million would be “recovered” by a reduction in funding to the Darwin Turf Club over an unspecified number of years.

Mr Gunner said he would ask the Commissioner of Public Employment to look at the actions of Mr Leonardi – who he did not name in the press release – to see whether “appropriate action” could be taken against the man who was formerly his most senior adviser, and who had a job created for him in the Education Department after he was sacked from Mr Gunner’s office when it became public he had written the letter to cabinet for Mr Dixon.

Mr Gunner also said the government would investigate civil action against private entities or individuals that may have benefited from the grant on the basis of undisclosed conflicts of interest.

While he named no one, the focus would be on Mr Dixon and his company Jaytex Constructions, which was controversially awarded the contract to build the grandstand, and who was also central to the ICAC investigation.

He said the market led proposal policy – which would have required the Turf Club to contribute some money towards the cost – would be changed to have ministerial oversight with reports to Cabinet.

NT Department of Business boss Shaun Drabsch dancing at an invite only Darwin Turf Club soiree, after he cleared them of any wrongdoing on the grandstand scandal, which has now be dealt with in an explosive ICAC report. #ntpol #northernterritory pic.twitter.com/5KZ4Ueq34L

Mr Gunner called on the board to resign so an administrator could be appointed to run the Turf Club and a new board installed. He said if they did not he would change the law so they could be sacked.

The Commissioner of Consumer Affairs will be asked to ‘urgently’ investigate the board under the Associations Act, he said.

Mr Gunner listed five other changes – previously announced – which included giving the government final say over who was awarded a tender that involved a grant.

They also pledged to create a “charter of budget discipline” so Cabinet could not grand funding outside of the Budget, which was a recommendation of the Langoulant budget repair review.

Mr Gunner also pledged strengthening the ministerial code of conduct so his caucus would better know right from wrong.