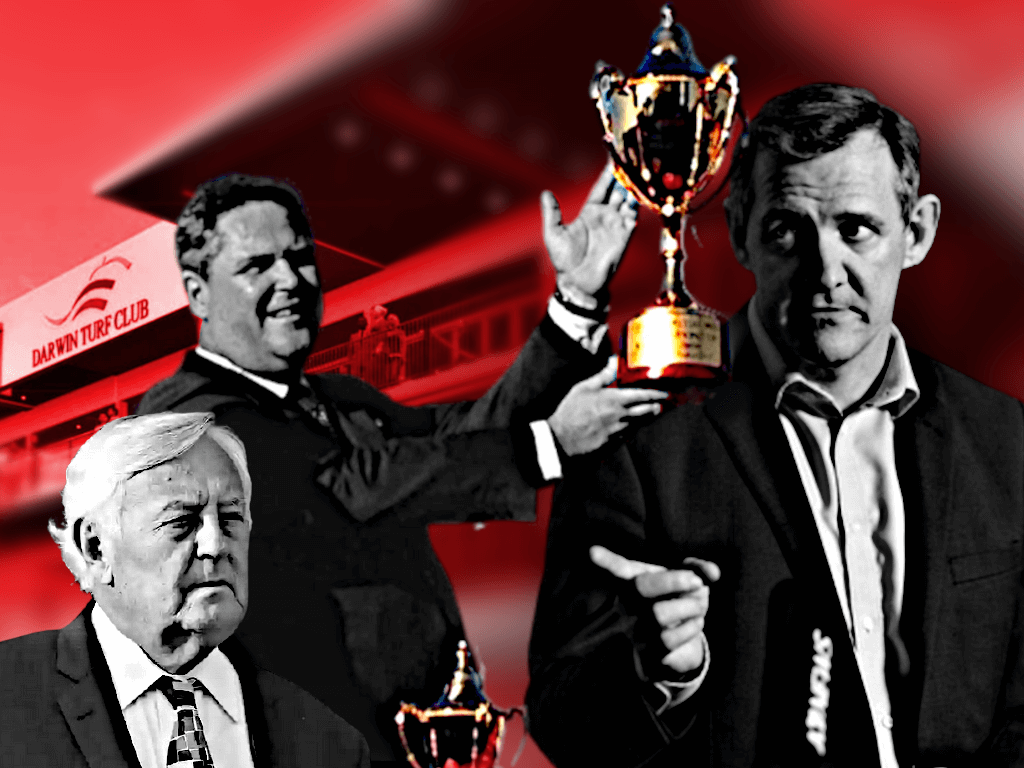 Ken Fleming’s report, released this morning, found failures in the senior ranks of the public service on all fronts, including a “duplicitous process” to secure the funding “that was utterly lacking in transparency”.

It also found conflicts of interest were not declared or managed and highlighted the roles of a mysterious “senior media figure” and former politicians who were involved in the process that saw the club receive the $12 million in taxpayer money.

Turf Club chair and Jaytex owner Brett Dixon may be referred to the Director of Public Prosecutions “for the consideration of criminal charges” and to the Police Commissioner. He was also found to have breached the public trust, raising “questions about [his] fitness to hold any office with an inherent fiduciary responsibility”, the report stated.

The massive investigation found the Darwin Turf Club Incorporated (DTCI) acted improperly and that the then-Department of Trade Business and Innovation had failed in its responsibilities.

Mr Fleming said in the report that the costings of the grandstand project were not supported by any economic benefits and claims of jobs being created were not based in fact.

He also found that the Turf Club had breached its obligations under the funding agreement with the government.

The investigation also found a “close relationship” between Mr Dixon and Mr Leonardi that involved promises made by Mr Leonardi to Mr Dixon for increased funding to the racing industry and Mr Dixon then making two $50,000 donations to the NT Labor Party in the lead up to the 2016 NT election, through various companies.

“Gifts, benefits and hospitality abounded in the form of free tickets to racing industry events throughout the NT,” the report stated.

“Mr Leonardi was involved throughout the process, lobbying on behalf of Mr Dixon, advising him of what to write … where to send his [grandstand] proposal, and providing his own personal assistance in several ways, including, in his words, ‘waiting for the right time to pounce’.”

Cabinet made decision to give grant with no evidence

The report found Mr Dixon had been lobbying the Gunner Government for the grandstand since at least early 2018, which was initially flagged as a market-led proposal to the Department of Trade, Business and Innovation – which would have required the Turf Club to contribute some money towards the cost.

However, Mr Fleming found that was never the real plan.

“No process conforming with the MLP policy was ever undertaken by DTCI,” he wrote.

“Contact by Mr Dixon with ministers and NTG staff was direct, deliberate and regular.

“Eventually, a general letter, substantially authored by Mr Leonardi, was signed by Mr Dixon and sent on behalf of [the turf club] with vague details and inflated, inaccurate or absent economic and employment claims.”

Mr Fleming found that low level public servants were still working on the market-led proposal ruse long after the grant had already been awarded to Mr Dixon by the Gunner Government cabinet before the proposal was even considered by the department.

“It is important to note that DTCI’s application was never considered under, or analysed against, the criteria of the MLPP (market-led proposal policy),” he wrote. “It cannot be said that the grant was justified by any rigorous process within the department.”

He also found the $12 million figure could not be backed up with any evidence of costs.

Secret meetings with contractors, a mysterious ‘senior media figure’ gets involved as Jaytex gets ‘the inside edge’ on tender

The ICAC investigation also found Mr Dixon’s company Jaytex was given the “inside edge” on the tender, following a secret meeting Mr Dixon held at his residence with Jaytex’s general manager Matthew Moss, Darwin Turf Club CEO Keith Stacy, Concept Designs director George Savvas, and an engineer, the day before Mr Dixon announced to the Turf Club board that the club had been granted the $12 million – and a full month before the project went out to tender.

“The meeting discussed the grandstand,” the report stated. “It would seem aspects of the tender process were discussed. Quotes were sought from Mr Savvas’ firm and the engineers for preparation of plans and drawings on which prospective tenderers would bid.

“This approach conferred on Mr Dixon, as the owner of Jaytex that was soon to bid on the project, a considerable advantage.

“Mr Dixon had a full 18 months’ knowledge of the project prior to the tender being released.”

NT Department of Business boss Shaun Drabsch dancing at an invite only Darwin Turf Club soiree, after he cleared them of any wrongdoing on the grandstand scandal, which has now be dealt with in an explosive ICAC report. #ntpol #northernterritory pic.twitter.com/5KZ4Ueq34L

The report also found the “inside edge was further assisted by a senior representative of a media agency who told Mr Dixon that his organisation was a ‘big supporter’ and would provide positive media coverage. That undertaking was honoured and continues to this day”.

The “senior media figure” was not named in the report, but a text message shows the person offered to “do my absolute best to put a stop to this [negative media coverage]”.

“Hang in there. Will do my absolute best to put a stop to this and you can count on us to deliver plenty of positivity when the grandstand opens. I can understand how tough this has been on you.”

The ICAC investigation found that Mr Dixon had made “false declarations” when he signed the capital agreement with the government, stating that he knew of no conflicts that existed and that he had misled his fellow turf club board members, the NT Government and the media.

“It represents an egregious breach of public trust and raises questions about Mr Dixon’s fitness to hold any office with an inherent fiduciary responsibility,” the report stated.

Mr Fleming found Mr Dixon put the Turf Club in a position of having the funding suspended or terminated for breaching the contract – a matter that the NT Government’s subsequent investigation did not pick up.

“In the event the NTG chose to trigger those clauses, DTCI would be unlikely to survive such a heavy financial blow,” the report said.

Turf Club Board knew about conflicts, did nothing; probity advisor ‘had no experience’

The investigation found the Darwin Turf Club board became aware that Mr Dixon wanted to bid for the tender but “allowed him to continue participating in board meetings”, lied to the public about it and falsified minutes of meetings.

“No action was taken by any board members in respect of Mr Dixon’s conflicts, nor did Mr Dixon declare any,” Mr Fleming wrote.

Mr Fleming found board members Damien Moriarty and James Herraman claimed the tender process was fair despite knowing that Mr Dixon had not been excluded from the process.

He raised concerns about a media organisation that “enthusiastically reported” how great the grandstand was without questioning their statements.

“Patently false public statements made by board members and others were enthusiastically reported in some quarters of the local press, which had committed to, and provided, favourable coverage of the project despite myriad concerns raised in other quarters,” Mr Fleming wrote.

The investigation also found that Mr Dixon, as chair of the Turf Club, had moved to pay Mr Moriarty for his role as project manager while Mr Dixon was bidding on the project, that was previously reported in the NT Independent.

Mr Fleming also found “the probity advisor appointed to ensure adequate oversight of the process, including conflicts of interest, had no experience and did not perform the required role”.

The ICAC investigation determined that the Turf Club’s tender selection panel, made up of five people, including Mr Moriarty and Mr Herraman, had substantially mismanaged public resources because the panel celebrated Jaytex’s departures from the tender specifications instead of penalising it.

“[That] undermined the validity of the assessment to such an extent that Jaytex would not otherwise have been the successful tenderer,” Mr Fleming wrote.

The report found the NT Government’s “attempted investigation” into possible breaches of the grant agreement was “thwarted by the DTCI board and secretariat, which failed to provide information and falsely declared that documentation did not exist”.

However, later in the report Mr Fleming found that the man who carried out the NT Government’s investigation into the grandstand, Shaun Drabsch, had undertaken a “duplicitous process” with Mr Leonardi to pretend the funding to the Turf Club would be a market-led proposal.

“My conclusion is that there is nothing transparent about a process which pretends to be one thing, namely an MLP … but is in fact another thing, namely, a direct grant,” Mr Fleming wrote.

The ICAC’s report also found that former Labor chief minister Paul Henderson and former Labor treasurer Syd Stirling were also supportive of the grandstand, despite no evidence it would have any economic benefits for the NT. Mr Stirling also sits on the Thoroughbred Racing NT board as deputy chair, while Mr Dixon is chairman.

TRNT is the body which distributes taxpayer money to the NT’s turf clubs.