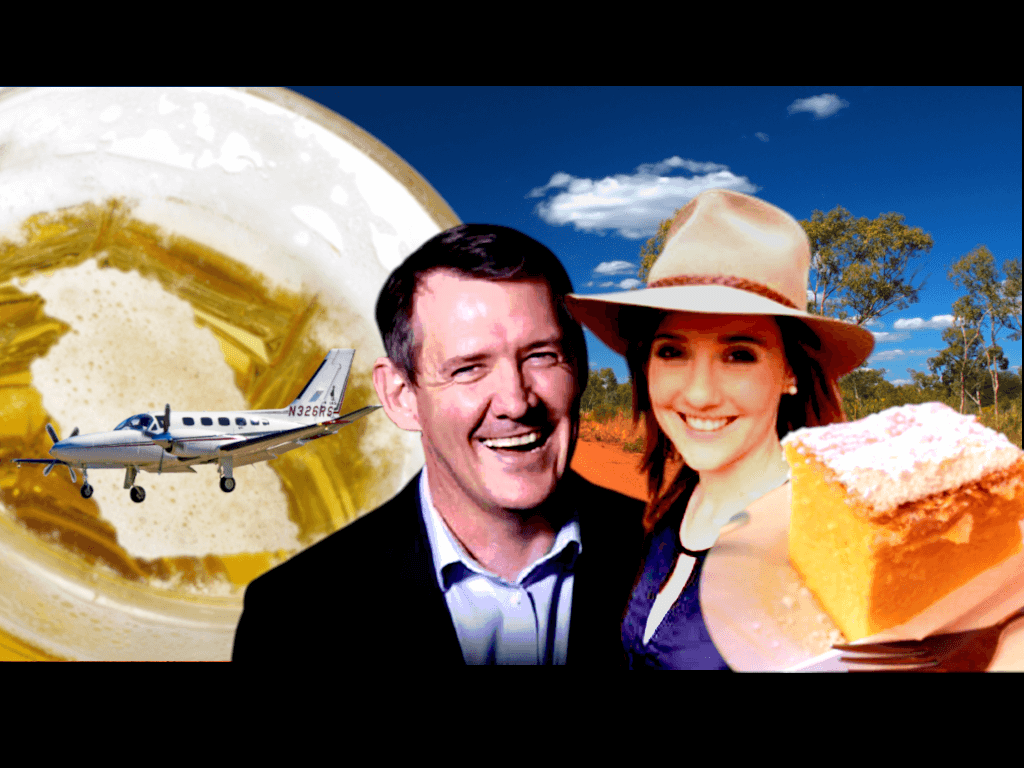 The internal travel records obtained by the NT Independent through Freedom of Information laws show in one post-election getaway around the NT, Mr Gunner and Ms O’Brien charged taxpayers $143 for two steaks and a dozen XXXX Gold stubbies at $7 a piece at an outback roadhouse.

They also charged taxpayers $77 for a chai latte, green tea and “scrambie eggs” during the same trip.

The five trips, taken between June 26 and September 14, 2020, while Ms O’Brien was on maternity leave from the ABC Darwin newsroom and Mr Gunner was campaigning, saw the pair and their newborn baby travel extensively throughout the Territory on public funds, including a road trip from Darwin to Alice Springs in late June at a cost of $2300 to taxpayers.

That included Mr Gunner and Ms O’Brien charging taxpayers $11 for two schooners of XXXX Gold at the Tennant Creek Memorial Club one evening.

There was also a receipt from a local steakhouse for $43.50 with only the word “meal” written in the description.

Bulk of trips in lead up to election, but Ms O’Brien did not campaign, ABC claims

The bulk of the trips were taken in the lead up to the 2020 NT election, under the auspices of “ministerial travel” and include the three trips that appear to have breached caretaker conventions by using taxpayer money for party political campaigning during the election period.

Those trips – and the other two trips involving Mr Gunner and Ms O’Brien – were approved by Mr Gunner’s brother-in-law Ryan Neve, who was then his chief of staff.

It remains unclear if department chief executive Jodie Ryan was aware of the trips during the caretaker period. The rules state that Ms Ryan should have had final approval of department expenditure at that time.

The ABC has denied Ms O’Brien engaged in any political campaigning and said she was “not representing the ABC” on the trips.

Internal documents show Mr Gunner and Ms O’Brien spent $800 on hospitality during the six-day trip, including $10 for two Italian mineral waters, $8 for a vanilla slice from an Alice Springs restaurant, $4.90 for a ‘regular’ coffee, $22.90 for something called “The Veg Shabang” breakfast at another Alice restaurant, $4.50 for a double espresso, and $69 for two meals at Hanuman Alice.

Taxpayers also picked up a $23 bill for a “veggie breaky”, $20 for chilli eggs, and $45 for a pizza party at another Alice restaurant during the trip.

Morning coffees were routinely billed to taxpayers, the documents show.

Mr Gunner makes $325,000 base pay a year as Chief Minister, plus benefits, including a $60,000 electorate allowance – that is intended to be used in part for travel. It appears from the travel records that Mr Gunner chose to charge taxpayers separately for the trips with his wife rather than use his travel allowance.

Post-election trip at taxpayers’ expense appears to be holiday

The September 14 road trip from Darwin to Katherine to Alice and Tenant Creek, which cost taxpayers $3,450, occurred six days after Mr Gunner and his cabinet team were sworn in.

The purpose of the trip is listed as “ministerial travel” to meet with “stakeholders” and for “community engagement”, but there was no list of planned meetings in the travel documents and no photos of any meetings with stakeholders posted to Mr Gunner’s social media accounts during that time.

All costs for he and his wife on all trips were charged to taxpayers in accordance with rules prescribed by the Remuneration Tribunal.

Mr Gunner has recently come under fire however, from the Opposition and crossbench for alleged breaches of the caretaker provisions for three of the trips that were taken between late July and early August.

The trips appear to be in violation of caretaker conventions that strictly prohibit using taxpayer money to promote “party-political” activities during the election campaign.

The caretaker rules state that “NT Government resources should not be used to make announcements that involve party-political activities”. It also includes a provision forbidding candidates from travelling with a minister at taxpayer expense.

CLP Opposition Leader Lia Finocchiaro and independent MLA Robyn Lambley have called on Mr Gunner to reimburse taxpayers for the trips that cost more than $20,000.

The taxpayer funds expended on Labor campaigning were not publicly disclosed due to the Gunner Government opting to exclude travel and accommodation expenses from mandatory reporting requirements for all candidates.