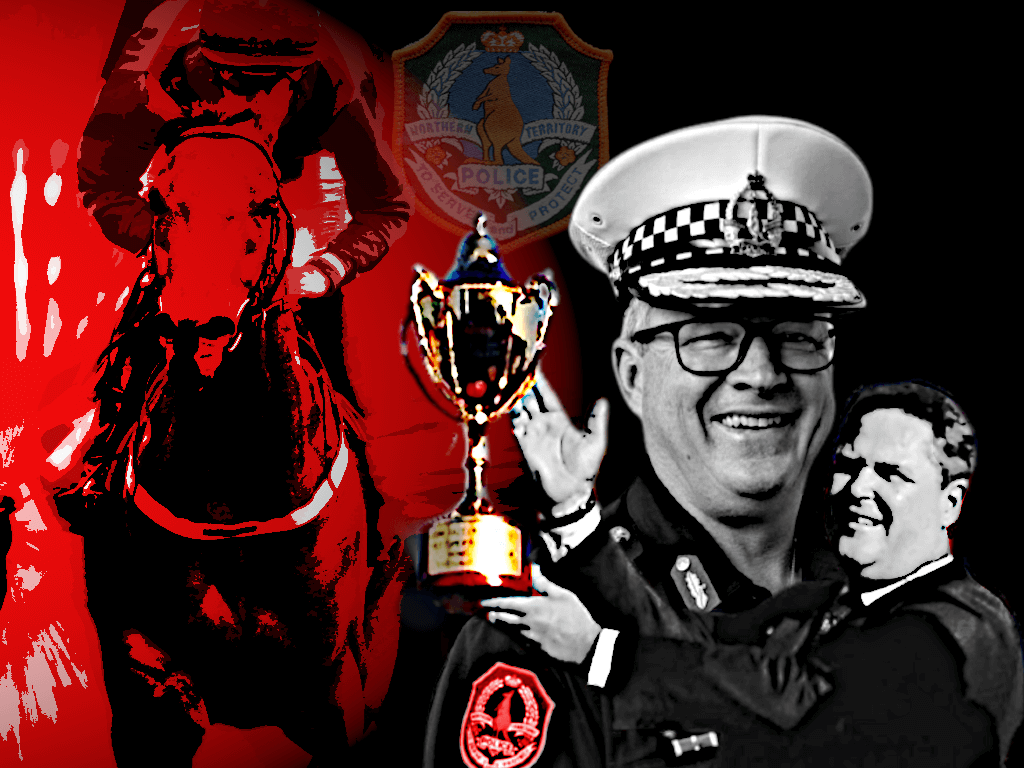 EXCLUSIVE: NT Police Commissioner Jamie Chalker, who internal Darwin Turf Club records show was invited to racing events as the “chairman’s friend”, has confirmed police resources are being used to investigate the NT Independent based on allegations made by former chairman Brett Dixon.

Mr Chalker was on the chairman’s invite list for the 2019 Darwin Cup and other racing events that year, which involved the use of government email addresses as well as what appears to be Mr Chalker’s private email account.

While others had their official titles listed, Mr Chalker was identified as the “chairman’s friend” in internal club records. He was the chief executive of the Department of Housing at the time, becoming police commissioner three months later.

Mr Chalker did not respond to questions over whether he had disclosed the hospitality or the nature of his relationship with Brett Dixon in NT public service registries, nor why his personal email address appeared to be used to communicate with either Mr Dixon or other Turf Club board members.

It’s understood Mr Chalker has also confirmed his attendance at this year’s Cup after being issued an invite by the Turf Club at their expense.

The gifts of hospitality have raised questions over Mr Chalker’s ability to direct an independent investigation that was apparently launched after Mr Dixon complained that he believed the ICAC had leaked information against him to the NT Independent.

The gifts have also cast doubt over what process would be followed if or when Mr Dixon is referred to Mr Chalker, in accordance with the ICAC’s report into the corrupt handling of the $12 million grandstand grant.

He said Mr Dixon may be referred to the DPP for criminal charges and “to the Commissioner of Police for consideration as a disqualified person under section 40 of the Associations Act”.

It is unclear if either recommendation has been acted upon.

Mr Chalker refused to comment on why he would launch an investigation based on Mr Dixon’s claims – a person who may be referred to him for investigation – and would not say why police resources were being used to investigate after the ICAC Inspector Bruce McClintock had reportedly investigated the leak claims and found no wrongdoing.

The Office of the ICAC said yesterday they could not comment on whether Mr Dixon has been officially referred to Mr Chalker or the DPP, citing his recent action in the Supreme Court to have the corruption findings against him overturned.

Chalker launched his own investigation into the NT Independent last month, which Dixon appears to have known about

At Estimates hearings last month, Mr Chalker publicly revealed for the first time that he was investigating alleged leaks to the NT Independent after a series of embarrassing stories for the police executive, including the bungled management of the police college that saw unqualified officers put on the beat, the suppression of public reporting of sexual assaults – including against children – and various other failures.

Mr Chalker told the Estimates hearing that he was investigating the “unlawful release of information”.

“If a criminal offence is occurring, then I believe it’s appropriate that we undertake an investigation and the unlawful release of information, that is, information that is not lawful to release, is a criminal offense,” he told Estimates on June 21.

“I’m quite confident that if the NT Independent has no criminality to be concerned about, then it shouldn’t be an issue that should cause them any concern.”

The NT Independent understands that Mr Dixon had spoken to board members and associates indicating that he was aware Mr Chalker was investigating this publication in early June, before Mr Chalker made the public admission in Estimates.

Sources have told the NT Independent that Mr Dixon appeared rattled by a series of investigative reports into the misuse of public funds on the grandstand project and had told people that the online paper knew details of meetings “they should not know about”.

He also claimed his concerns were “in someone else’s hands” and would be dealt with.

Mr Dixon has not responded to emailed questions.

Mr Chalker also refused to comment on whether he had been in contact with Mr Dixon about an ongoing police investigation.

The NT News, which launched an unprecedented attack on the NT Independent yesterday over an article that identified their editor Matt Williams as the “senior media figure” in the ICAC report that offered favourable reporting to Mr Dixon while he was under investigation for the misuse of public funds, today reported that Chief Minister Michael Gunner has thrown his support behind the police investigation into the NT Independent, telling the paper in an exclusive interview that the “apparent leaking” of ICAC information was “extremely serious”.

“The allegations that confidential information relating to the ICAC investigation into the Darwin Turf Club grandstand was leaked are extremely serious,” he said.

“We understand police have also confirmed they will investigate the allegations.”

The NT News did not seek comment from the NT Independent.

Mr Gunner has avoided media this week as the grandstand scandal continues to dog him. The NT News apparently did not take the opportunity of the exclusive interview to ask Mr Gunner why he believed Mr Dixon’s claims of leaked information, but not his claims that Mr Gunner pushed through the grandstand grant for his own political purposes.

The NT Independent yesterday published the full submission made by Mr Dixon that Mr Gunner relied on to convince Cabinet to approve the $12 million of taxpayer funds for the grandstand project that was ultimately awarded to Mr Dixon’s company to build. It was rife with unverified economic claims about the benefits to the community of constructing the grandstand.

The NT Independent stands behind its reporting into the misuse of public funds and police executive failures that relied on information that was legally obtained.