‘Abuse of power to the next level’: Opposition, independents call on Gunner to make up lost sitting days 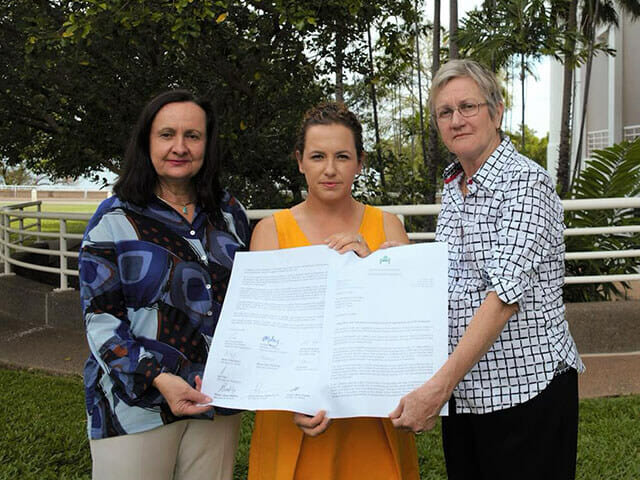 Chief Minister Michael Gunner is engaging in anti-democratic conduct by refusing to reinstate three days of parliamentary sittings that were cancelled during last month’s snap COVID-19 lockdown, the CLP Opposition and independent MLAs say, warning that Territorians are not getting their voices heard.

Opposition Leader Lia Finocchiaro, Member for Araluen Robyn Lambley and Member for Goyder Kezia Purick have written a joint letter to Speaker Ngaree Ah Kit asking her to officially add three sitting days when Parliament resumes later this month to make up for the lost time, in order to represent their constituents properly in the Legislative Assembly.

Ms Finocchiaro said the Opposition and independent members represent nearly 100,000 Territorians “who rely on us to raise their voice in the Parliament”.

“The most recent anti-democratic actions of deleting three sitting days from the sittings calendar is too much for anyone to be able to stomach,” she said.

“This is incredible that the Gunner Government cancelled sittings during lockdown and has refused to reinstate those sittings days.

“And we know why they’ve done that, they don’t like the scrutiny that the Parliament provides, and they don’t want to answer our questions. Parliament is one of the most critical tools to scrutinise legislation and hold this shameful Government to account.”

The letter was signed by all seven CLP members and all three independent MLAs.

“In our collective view, the Labor Government is manipulating the rules of Parliament and has turned the Legislative Assembly from a functioning democracy, where debate from all sides is heard, to one that shuts down any dissenting voice,” the letter states.

Ms Lambley said she was frustrated and disappointed she had been denied three days of sittings in which to voice the concerns of her constituents to government.

“We’re facing a crime crisis like never seen before in the history of the Northern Territory in Central Australia here and I can’t represent the interests of my constituents when it comes to crime,” she said.

“I’m also very concerned about the latest reporting of vaccination rates in the Northern Territory.”

She added that Mr Gunner’s refusal to make up the days showed the decision was “in the best interests of the Gunner Government and not the people of the Northern Territory”.

Ms Ah Kit told the NT Independent last month that the sitting dates were cancelled based on a “risk assessment” that took into account the possibility “for spreading infection” in the 25-seat House during the lockdown that was called in response to one person having COVID in the NT.

But she did not say if they had explored using teleconference services like bigger states and the Federal Government have during lockdowns.

She also did not say who made the call to cancel the sittings.

It followed a fiery week of sittings in August where the government only passed one bill and was relentlessly hounded by the Opposition for myriad issues including crime, the RDH health crisis, the economy and the $12 million Darwin Turf Club grandstand scandal.

Despite not having anything else to do, the Labor government used its numbers to shut down a censure motion for their handling of the scandal before the issue could be debated.

Mr Gunner said earlier this week that the three missed days would not be made up and that members can “do longer nights to get the work done” when Parliament resumes the week of September 21.