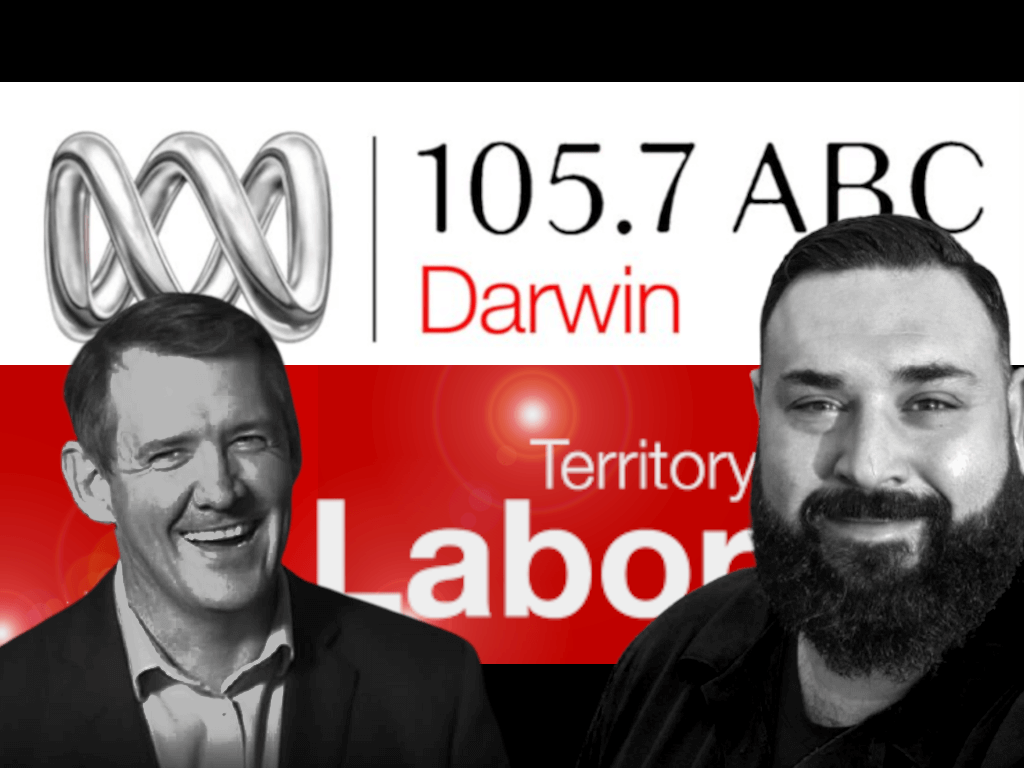 EXCLUSIVE: A portion of an ABC Radio interview segment involving the woman at the centre of the Labor cocaine sex scandal that detailed politically damaging sexual comments, did not air because Labor MLA Mark Turner ordered that it be cut, new text messages reveal.

The revelations follow the release of other text messages over the weekend that have raised serious questions about the extent of Gunner Government operatives working behind the scenes to attempt to cover-up the scandal as it slowly leaked out publicly, at the same time the Chief Minister refused to publicly acknowledge it.

The latest text messages, obtained by the NT Independent, show Mr Turner was conversing with the woman, with whom he and the Chief Minister’s senior adviser Kent Rowe were carrying out extra marital affairs, on the morning the woman publicly disclosed the affair on ABC Radio Darwin’s Breakfast program with host Jo Laverty on February 17.

The NT Independent previously revealed that Mr Turner had attempted to convince the woman to issue a false statement to media denying the sexual aspect of their affair following the interview.

However, further texts show that Mr Turner was aware of the pre-recorded interview before it aired and that a portion of the conversation was sent to him by the woman beforehand, that he told her to cut.

“I’d ask Jo to get rid of the consent stuff and sex stuff as it’ll get twisted,” Mr Turner wrote upon being sent a snippet of the conversation before it aired.

“Do you agree, like I’ve said before it needs to be team work,” Mr Turner wrote.

“Yes and she (Ms Laverty) said yes to that,” the woman responded.

“Thanks for helping me,” the woman continued. “I didn’t blab that on air, that was two girlfriends chatting. I didn’t know she was recording. She’s gonna take it out now.” Mr Turner inexplicably responded with: “That’s the joy of politics it’s changing the world slowly so people can understand it.”

On the same morning, he talked about his “progressive” agenda if he were to remain in his position as a backbencher and about misunderstood “love” and supporting the “polyamory/non-binary community”.

The woman then sent him a Facebook Messenger message via SMS from “Jolene Audrey”, who had written: “Done, it’s out”.

“She cut it,” the woman told Mr Turner. He then sought the woman’s approval to say “nothing inappropriate has happened”.

“Are you happy for me to go down the route of nothing inappropriate has happened it’s a hit job, we’ve done nothing illegal and unfortunately it’s internet gossip that’s been weaponised with what appears to be altered information to try and make it’s (sic) something it’s not,” Mr Turner then asked in a message.

“Does that sound fair,” he continued.

Mr Turner also asked the woman to delete the audio of the interview segment she had sent him via Facebook Messenger before anyone in his office became aware.

“Can you delete that audio from the facebooks (sic) before the staff wake up and grab it?” he asked. “Not sure how to do the unsend messages.”

Mr Turner’s wife is employed in his electorate office.

“Just so I’ve got the heads up is the rest of the interview with Jo that we’ve just sent messages to each other?” Mr Turner asked.

He then wrote that he was deeply concerned about the possible damage to the “poly(amory)/non-binary community” from the affair leaking out, at which point, Labor powerbroker Kent Rowe is mentioned briefly in the text exchange.

Upon hearing the edited interview air on ABC Darwin, Mr Turner told the woman she “came across really well”.

But later the same day, he suggested the woman issue a false statement to media, retracting the consensual affair, and telling her to recant her comments that it involved a sitting MLA. Previously reported messages show he had sought advice from others about how to mitigate the damage from the scandal, repeatedly telling the woman to “remain silent”.

The woman did not oblige with the request for the false statement, forcing Mr Turner to admit the affair in Parliament.

Mr Gunner claimed at the time that his staff were not involved in coaxing the woman to lie, however it remains unclear why Mr Turner had a change of heart hours after telling the woman she had done “really well” in the interview.

Ms O’Brien was featured on ABC’s Media Watch program last November that highlighted concerns – and provided examples – that some of her reporting appeared to benefit her husband’s political interests. Ms O’Brien has not reported on the sex scandal and is not believed to be in a decision-making role at this time.

Others have taken to social media, accusing the ABC Darwin newsroom of blatantly attempting to downplay the political significance of the cocaine sex scandal.

Last Wednesday, when Mr Rowe was revealed by media and named later in Parliament as the senior staffer forced to resign over his involvement in the scandal, the ABC said they could not name him for “legal reasons”. It remains unclear what those legal reasons are.

Mr Rowe, a former Territory Labor Party secretary and one of Mr Gunner’s four most trusted advisers, was forced to resign on the same day Mr Turner was sacked from the Labor caucus over what Mr Gunner deemed to be dishonesty for failing to disclose the extent of his relationship with the same woman.

The ABC sent a brief statement to the NT Independent denying the interview was edited at the request of the “subject”.

“Any suggestion that Ms Laverty allowed the subject of the interview to make edits to the interview before it aired is wrong,” said ABC Regional and Local spokesman John Woodward.

“A few comments were recorded in the preamble to the interview which, on reflection, Ms Laverty wanted to include.  She went back to the subject of the interview seeking permission to do so. Permission was not given.

“There were no changes to the recorded interview, as edited by the ABC Radio Darwin team.

“Aside from local news reporting, the ABC has reported this story nationally on its flagship evening radio current affairs program PM.”

Mr Woodward did not explain what specific edits were undertaken by the ABC Darwin team, nor did he address direct questions about the Darwin newsroom’s ongoing and unresolved conflict of interest, or if Ms Laverty was aware that Mr Turner had suggested the section of conversation not be aired.

He also did not respond to a question about whether Ms Laverty had spoken to anyone in the Labor team before the interview aired. The ABC also did not address why Ms Laverty called the affair between the woman and Mr Turner “a really sweet, consensual relationship” after she had admitted on air to being aware Mr Turner was the then-unnamed MLA being discussed, who is a married father of five, and a former police officer.

During the interview, the woman stressed that she had no evidence of “any MLA doing anything illegal” during a sex romp on election night.

However, Ms Laverty did not ask her about the staffer at any time during the seven-minute interview.

Ms Laverty ended the segment by suggesting it was time for the public “to drop it”.

“So, there you go, the woman at the very centre of all of this so-called cocaine sex scandal, who says she has been contacted by police, and they have at this stage no further questions for her,” Ms Laverty said during the broadcast.

“So, is it time to drop it? Do you think? Are you just sick of it? Now that you know a little bit more about the detail, I’d be curious to know. Do you want to hear more about this so-called sex cocaine scandal or is it time to put it to bed?”

The interview, and another shortly after on Mix 104.9, breathed new life into the scandal, resulting in Mr Turner admitting the affair in Parliament later that night in a speech co-written by the Chief Minister that refrained from using the word “sexual” to describe the affair.

He denied doing “anything illegal” and said he did not condone drug use, despite later text messages revealing that he was aware of the woman’s cocaine usage on multiple occasions.

He was sacked the following day by Mr Gunner for “not being honest” about the extent of his relationship and has since been referred to the Legislative Assembly’s disciplinary committee over accusations he misled Parliament during his speech.

Mr Gunner’s staff admitted that they knew about the allegations since February 2 and had provided “advice” to Mr Turner.

Chief Minister Michael Gunner said he knew about the allegations “early in the week of February 8”. Instead of dealing with the scandal directly however, he used Parliament to accuse the CLP Opposition of failing to provide proof of wrongdoing, while his staff appear to have been working behind the scenes with Mr Turner to mitigate the political damage.

Mr Gunner’s office refused to comment for this story, including whether they had contacted the ABC or Ms Laverty before the interview aired.

The NT Independent understands NT Police’s Special References Unit are currently investigating the cocaine sex scandal and the Independent Commissioner Against Corruption was also made aware of the matter long before it became public.