Labor MLA tried to get woman to issue false statement about affair before confessing, texts reveal 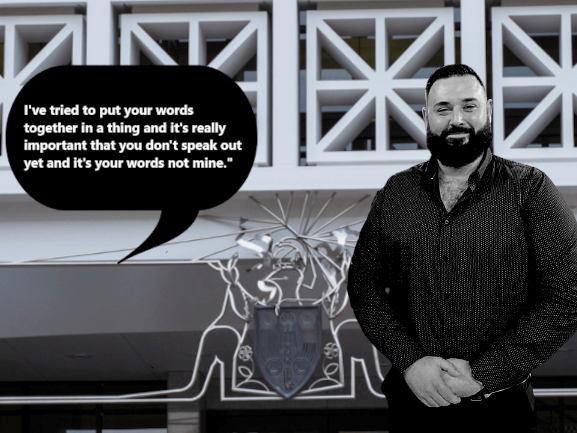 Labor MLA Mark Turner sent a statement to the woman with whom he was having an affair to publicly release that recanted her story about the consensual affair hours before his late night parliamentary confession, new text messages reveal.

The messages also appear to show Mr Turner was working with Labor Party operatives to persuade the woman to issue the false statement.

Verified text messages seen by the NT Independent show Mr Turner provided lines to the woman to walk back comments she had made on two local radio stations on Wednesday, where she stated that she had been in a relationship with a “sitting MLA”, telling her it had to appear to be “your words”.

“You might need to clarify the consensual relationship stuff was someone else in the alleged scandal thats (sic) not a MLA,” Mr Turner wrote on Wednesday morning after she appeared on ABC Radio.

“They’ve latched on to MLA to try and run the sordid story but I wouldn’t talk to anyone so they can’t ambush you mate.”

Mr Turner and the woman discussed a media strategy, with the woman saying she wanted to keep Mr Turner happy and would draft a statement with lines provided by Mr Turner to issue to media. Mr Turner said at one point that he didn’t want to “put words in your mouth” before then sending lines.

“I’ve tried to put your words together in a thing and it’s really important that you don’t speak out yet and it’s your words not mine,” Mr Turner wrote.

“I’m annoyed my words have been twisted this morning,” Mr Turner sent for the woman to say.

“I’ve not been in a sexual relationship with any of them regardless of how anyone tries to twist it.

“I’ve had a lovely and sweet friendship with someone else who they’ve tried to drag into this too. They’re not an MLA. It’s nobody else’s business and twisting my words is smutty and out of bounds.”

The woman asked Mr Turner when he needed her to release the statement.

“Do you need this before [Parliament’s] question time?” she asked.

“Maybe I’ll check,” he wrote back.

It was unclear with whom Mr Turner was checking.

False statement not released, Labor refuses to comment on who in the party was involved

But the woman backed out of issuing the statement, after being asked to lie. The false statement was ultimately not released and Mr Turner was forced to admit the affair.

Mr Turner outed himself in Parliament late last night as the Labor politician caught up in the alleged cocaine sex scandal but denied he had engaged in any illegal activity. He is a former police officer and a married father of five who regularly attends church in Palmerston.

Mr Turner said he was forced to address the growing scandal after media reports about other text messages that showed he was aware the woman was using cocaine.

In Parliament on Wednesday night, Mr Turner referred to the relationship as a “friendship”, mimicking the lines he attempted to give the woman, but also said it became “too intimate”.

“During this friendship we exchanged general conversation, banter, jokes, and some intimate conversation.

“I do not condone illegal activity, and I do not participate in it.

“I accept that there were aspects of our friendship in the past that were not appropriate, because they were too intimate.

“It was not illegal. It was consensual. It was respectful. But not appropriate.”

Mr Turner also said he had been in contact with Chief Minister Michael Gunner all week as the scandal unfolded.

“I have been speaking to the Chief Minister this week – and I am grateful to him and my caucus colleagues for his support,” Mr Turner said.

Mr Gunner’s director of communications Maria Billias did not respond to questions, including who in government Mr Turner was working with to persuade the woman to issue the false statement.