‘You’re an anti-vaxxer!’: Gunner’s claims against CLP dismissed by Speaker as ‘highly disorderly’ 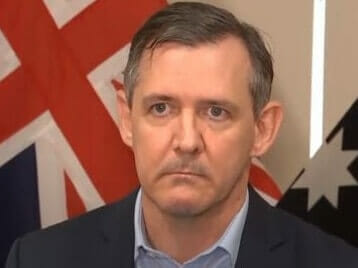 Chief Minister Michael Gunner has accused the Opposition Leader and all CLP Members of Parliament of being “anti-vaxxers” in a heated Question Time that saw the Speaker deem the claims “offensive” and stricken from the parliamentary record.

But Mr Gunner was not ejected from Parliament after failing to substantiate his claims.

The Opposition CLP focused their questions around the emergency crisis at Royal Darwin Hospital since February, but Government ministers deflected those questions and instead attacked the CLP for a letter written by Member for Brennan Marie-Clare Boothby, dated August 19, when she asked for clarification over whether the Gunner Government intended to mandate COVID-19 vaccines for Territory teachers.

Mr Gunner said the letter was proof that the CLP doesn’t care about children and does not support vaccines.

“This is a test of her leadership!”

Ms Finocchiaro objected to Mr Gunner’s claims and his finger-pointing, denying her or her team are against COVID-19 vaccinations.

“Imputations that my team are anti-vaxxers is wrong, my entire team are vaccinated and we push the vax message hard,” she said.

“I ask him to withdraw this highly-disorderly and highly offensive [comment].”

However, Mr Gunner refused to withdraw his claims when given the opportunity by the Speaker.

“I cannot withdraw as a matter of principle, this is for our Territory kids, they are anti-vaxxers!”

Speaker Ngaree Ah Kit then reviewed the letter from Ms Boothby and determined that it “doesn’t say that the CLP are anti-vaxxers”.

But Mr Gunner again refused to withdraw the comments.

Instead of tossing the Chief Minister out of Parliament, Ms Ah Kit ruled that Mr Gunner’s anti-vaxxer claims were “highly disorderly and are not to be published in the parliamentary record”.

“They must apologise and they must say if they are pro-mandatory vaccines for our kids! You are a disgrace, an absolute disgrace!”

“The CLP wants every Territorian to be fully vaccinated,” she said in the statement.

“Every public statement we have made supports this and we have consistently called for improvements to the vaccine rollout so that more people are able to get the jab.”

Ms Boothby’s August 19 letter to Health Minister Natasha Fyles, which was tabled in Parliament, references comments made by Mr Gunner on his Facebook page on August 18, and seeks clarification for her constituents on whether COVID-19 vaccines would be mandated for teachers.

“The choice of words used by the Chief Minister being divisive is a concern of constituents, marginalising those who can’t or choose not to vaccinate, as well as lack of science behind the opinions shared,” Ms Boothby wrote.

“Would you be able to advise if the government will be changing legislation to mandate vaccines for educators? If they do not want to, will there be implications for them being able to go to work and perform their job roles?”

Ms Finocchairo said the letter was written on behalf of a public servant “who was scared of speaking out against government, but wanted their concerns raised directly with the Minister for Health”.

“The Member for Brennan does not express her own opinion in the letter and does not agree with the sentiment of the constituent. She did her job by passing the feedback on, privately and directly to the Minister for Health,” Ms Finocchiaro said.

“The only people who are giving the anti-vaxxer sentiment a public voice, is the Gunner Government, by raising it today in Question Time. The Chief Minister is fanning the flames of division to make cheap, wrong and unfounded political points.”

Mr Gunner announced last week – nearly a month after Ms Boothby’s letter – that teachers, childcare workers, retail and hospitality workers and others would be mandated to get the jab, once the NT reaches the 80 per cent vaccination rate.

He said later that his mandatory vaccination plan would be enshrined in legislation after the public health emergency was lifted.