‘Your actions may impact the course of justice’: Emails show NT News GM had concerns over paper’s ICAC conflict of interest 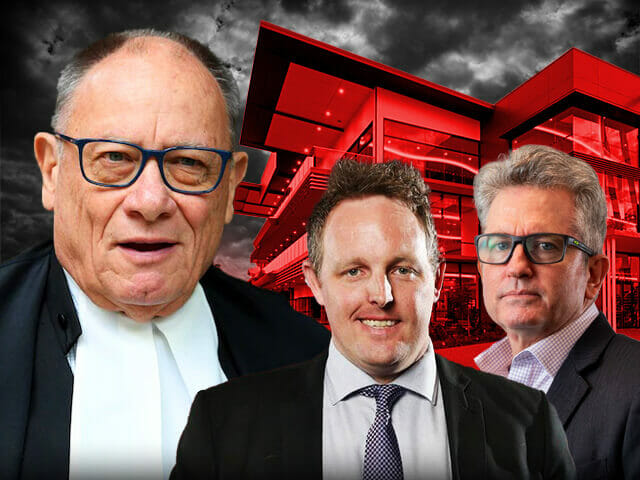 The NT News made an extraordinary pledge to have its reporting on the NT’s anti-corruption body overseen by an external editor, after former editor Matt Williams’ perceived conflict of interest with the ICAC was exposed, a report by the ICAC Inspector has revealed.

Emails show Mr Grant had informed Mr Thomson in the days leading up to the grandstand corruption report that then-editor Williams “has a personal and professional relationship with actors central to the ICAC [grandstand] investigation and their [racing] industry” and that the newspaper may be in violation of journalistic standards.

Mr McClintock determined that Mr Grant was “acting to protect the integrity of a significant ICAC investigation” and that his disclosure was made in accordance with the administration of the ICAC Act.

However, internal emails published in the Inspector’s report show that NT News general manager Greg Thomson was concerned about Williams’ perceived conflict of interest and had pledged to bring in external oversight for any stories relating to the ICAC – however it is unclear if that occurred.

In one email from Mr Grant to Mr Thomson, dated June 21, 2021 – four days before the ICAC’s explosive Turf Club grandstand report was released – Mr Grant specifically told Mr Thomson that the NT News “may be inadvertently breaching the Australian Press Council’s Standard of Practice – particularly general principle 8 relating to conflicts of interest and their influence on published material – and that your actions may subsequently have an impact on the course of justice”.

“Some time ago your editor communicated in writing with a person who is central to the investigation, when they were receiving negative media coverage …” Mr Grant wrote to Mr Thomson.

“Amongst other things the editor said, ‘will do my absolute best to put a stop to this’ and ‘you can count on us to deliver plenty of positivity when the (REDACTED) opens’ and ‘the NT News, especially since I’ve been in charge has been a big supporter’.

“We have analysed the NT News coverage since the commitment was made and find it to be unusually weighted in favour of the individual, the club and the industry. Further, we have noticed intense criticism of the ICAC, across a number of fronts by the NT News in the lead up to the release of this report.

“We do not comment on the NT News’ right to hold us to account, but the level of reporting on a government agency including front pages seems incredibly high.”

Despite News Corp filing complaints with the Inspector and defending its former editor, Mr Thomson admitted in a subsequent email to Mr Grant that he was concerned about the OICAC’s “view of Matt Williams and any perception of conflict of interest in relation to NT News coverage of any ongoing ICAC investigation or the conduct of the ICAC commissioner Ken Fleming, between now and the end of his tenure”.

“By way of coincidence, Matt Williams has been appointed to a new role with News Corp and has no day-to-day supervision of the newsroom from today,” Mr Thomson wrote to Mr Grant.

“I undertake to escalate this issue on a confidential basis to John McGourty, News Corp’s National Community Mastheads Editor, to enable him to provide a third-party oversight of any coverage of ICAC matters by the Darwin newsroom.”

The move to bring in outside oversight by a community newspaper editor is unusual for the NT News, that had defended Williams’ actions after it was publicly revealed he had made the offer of favourable media coverage to former Turf Club chairman Brett Dixon.

It’s unclear however, whether the pledge of external oversight was acted upon and if the NT News’ coverage was at any time overseen by the parent company’s community newspaper editor.

The NT Independent revealed Williams as the unnamed “senior media figure” in the ICAC’s grandstand report last July, after providing Williams and News Corp the right of reply.

Both the company and Williams chose not to respond to direct questions about the text message and did not mention the external oversight arrangement. A month after the story identifying Williams was published, News Corp’s Sydney lawyers filed a complaint with the ICAC Inspector alleging that Williams was not afforded “procedural fairness” by Mr Fleming before the text was made public and that a few words at the end of the published text message were missing.

Mr McClintock determined last month that the text message included in the grandstand report was incomplete because investigators were “inexperienced” and had failed to download the entire message from Mr Dixon’s phone. The missing part of the text in which the words “…big supporter of racing and we will continue to be” were not reported, but did not change the context of Mr Williams’ pledge to Mr Dixon to presumably provide favourable media coverage.

He also found the ICAC had breached its own Act by not affording Williams the right of reply to an adverse finding against him.

In the days leading up to the release of the ICAC’s damning Darwin Turf Club report last June, the NT News began a series of stories into allegations of a conflict of interest in the Office of the ICAC between its then-director of investigations and her partner – a former SA police officer – who had been awarded investigative contracts.

Mr McClintock dismissed those allegations last year, ruling that the conflict of interest in the OICAC had been properly managed.

However, Mr Fleming was referred to NT Parliament’s Privileges Committee last August by Chief Minister Michael Gunner over comments he made during a public accounts committee hearing about a former employee who had first raised the issue of the investigation contracts being awarded, which contradicted evidence later provided by the former employee’s lawyer.

No time frame has been provided by the government for when that hearing is to occur.

DISCLOSURE: NT Independent editor Christopher Walsh was senior political reporter for the NT News between 2014 and 2017 and sued News Corp and Williams for wrongful dismissal in 2017. The matter was settled out of court.