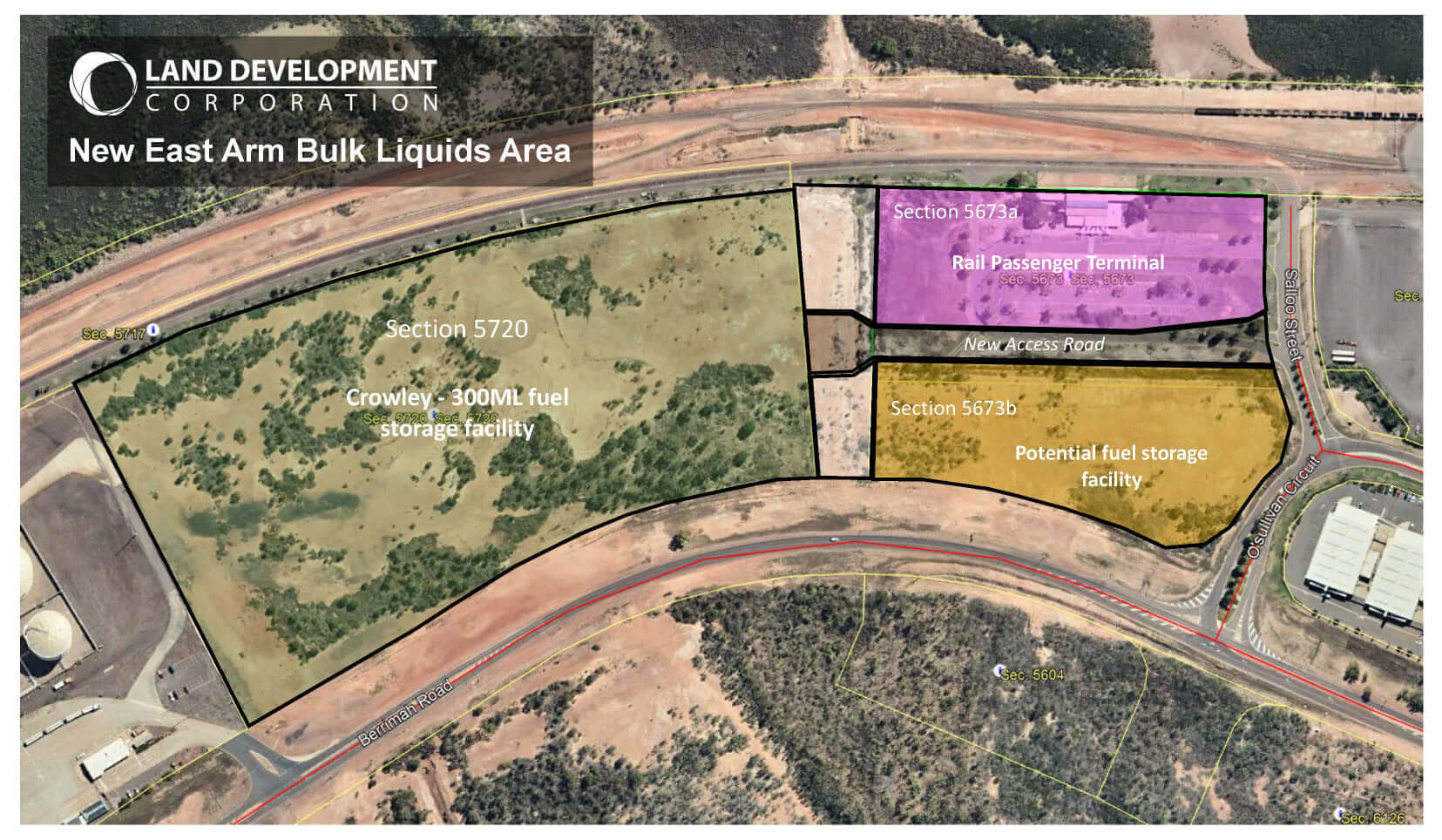 The United States Government will begin construction of a $270 million aviation fuel storage facility that will stock up to 300 million litres of fuel to support American military operations in the Pacific later this month, with preliminary works already commencing the NT Government has said.

The 11 jet fuel tanks will be built in East Arm at the Land Development Corporation’s Bulk Liquids Area over the next two years.

Initial works are being carried out including clearing of the site and developing vehicle access ahead of the construction of the facility itself, after the facility was granted approval from the NT Environmental Protection Authority and issued a development permit for construction.

“The groundworks underway herald the start of construction of the new facility and provide an exciting look ahead for site activity for the new year,” Land Development Corporation CEO Tony Stubbin said.

Mr Stubbin said work at the facility would provide a boost to construction jobs in the NT and enhance competition in the local fuel storage market.

The NT Government said the project will create around 400 jobs during construction and support an additional 20 employees once the facility is operational late next year, however, it was not clear if those jobs will be filled by locals.

The U.S. Defense Logistics Agency said the facility will play a pivotal role in servicing US defence operations in the region, with the infrastructure used for the transfer, management and storage of military specification jet fuels.

In September 2021, the same time the AUKUS pact was signed, the US government awarded the tender to provide fuel storage and management services in support of the US military to Florida-based company, Crowley Government Services Inc.

Crowley said the term of the award is four years, with a five-year option period.

The Darwin facility will be a contractor-owned and contractor-operated fuel storage operation, which means Crowley will manage the development and subsequent ongoing operations of the $270 million facility.

In December 2021, the Land Development Corporation and Crowley Australia Pty Ltd, the Australia-based Crowley subsidiary, reached an agreement on the land and signed a long-term lease.

Crowley awarded Saunders International with a $140 million contract for the design and construction of the 11 jet fuel tanks for the facility.

“These collective efforts will allow Crowley to provide important fuel storage and management services to the U.S. military, as well as strengthen our growing presence within Australia and the Northern Territory,” Crowley Solutions Vice President Sean Thomas said.

In September 2021, the trilateral alliance of the Australia, UK, and the United States announced a “historic” security pact, dubbed as “AUKUS”, aimed to strengthen military capabilities in the Pacific, allowing them to share advanced defence technologies and equipping Australian forces with the know-how to build nuclear-powered submarines.

Security analysts say the Northern Territory is becoming “a repeat of its former wartime role 80 years ago.”

The Australian reported in October that while the bulk fuel storage facility can be regarded as convenient, albeit remote, for military training in the area for the ADF and US, “tensions with China amid growing strategic competition in the region is now witnessing the transformation of the Top End into an important defence springboard into the Indo-Pacific.”

In an online forum organised by the Foreign Policy Community of Indonesia to discuss the regional implications of AUKUS, former senior Vietnamese diplomat Dr Nguyen Hung Son said that “the real consequences of AUKUS were not the nuclear submarine purchase, but the strengthening of US defence capability in northern Australia, evidence of a long-term US commitment to the region and its allies”.

“There are aspects of the agreement between the three countries which take effect already, that is the acquisition of sensitive defence capability and military capability to Australia and access by the US military to several Australian (northern) ports,” Dr Son said.

“I think these are bigger consequences and will have a bigger, more immediate, impact to the region.”