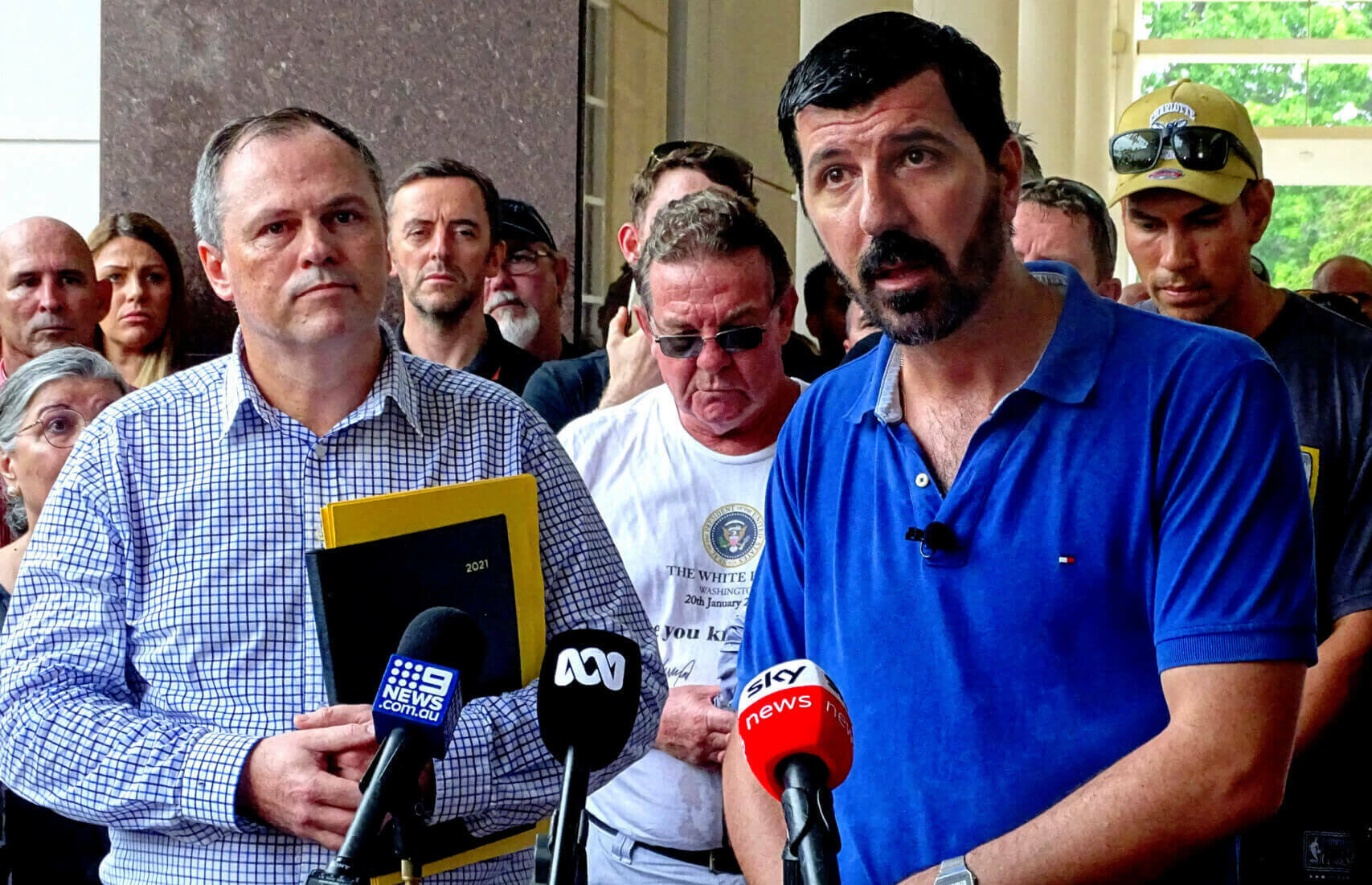 A group of businesses opposed to the NT Government’s vaccine mandate has commenced legal action in the NT Supreme Court, arguing the Chief Health Officer’s directions are an overreach of power and ultimately “racist”.

United NT Businesses held a rally outside the Supreme Court this afternoon to announce the legal action to overturn the mandate had been filed, which they said was a “historic day for our Territory” and pledging to see “justice served”.

“What we’ve seen is what suspending normal democratic processes does to a government who’s high on their power trip and forcing draconian, unreasonable laws on everyday people,” said lead plaintiff and UNTB president Mario Tsirbas.

“I’m not here to throw mud on anyone, we are not here to name call or denigrate any member of our society. We are here to stand up for the rights of everybody.

“We are reasonable, everyday people who have seen what’s happening and have said, ‘this is too much and too far’.”

The mandates were brought in on November 12, and essentially forced anyone who would come into contact with “vulnerable people” to be vaccinated as a requirement of keeping their job.

“Make no mistake, the directions are racist.”

Mr Kelly said had that clause been inserted in interstate directives, the outcomes of court challenges in those states would have been different.

“(The judge in NSW) actually included in his judgment that if the New South Wales directions, or orders as they’re called there, had have targeted a particular race, or other particular group in society … then his decision may have been different,” Mr Kelly said.

Mr Tsirbas said the mandate had taken a toll on the entire community, including economic and business concerns, as well as “through the roof” mental health issues.

He said one of the UNTB’s members told a “troubling story” about the effects of the mandate, where an Indigenous employee had offered to “renounce his Aboriginal heritage, purely for the sake of helping that business deal with these racist laws”.

“I don’t know about you, but driving an individual to the point where they willingly offer to deny their cultural heritage is an absolute disgrace,” he said.

The legal action is being funded by the group’s members and from donations of time and money from people, including lawyers, in other jurisdictions across Australia, Mr Tsirbas previously said.

The NT Independent has not yet seen the originating motion.