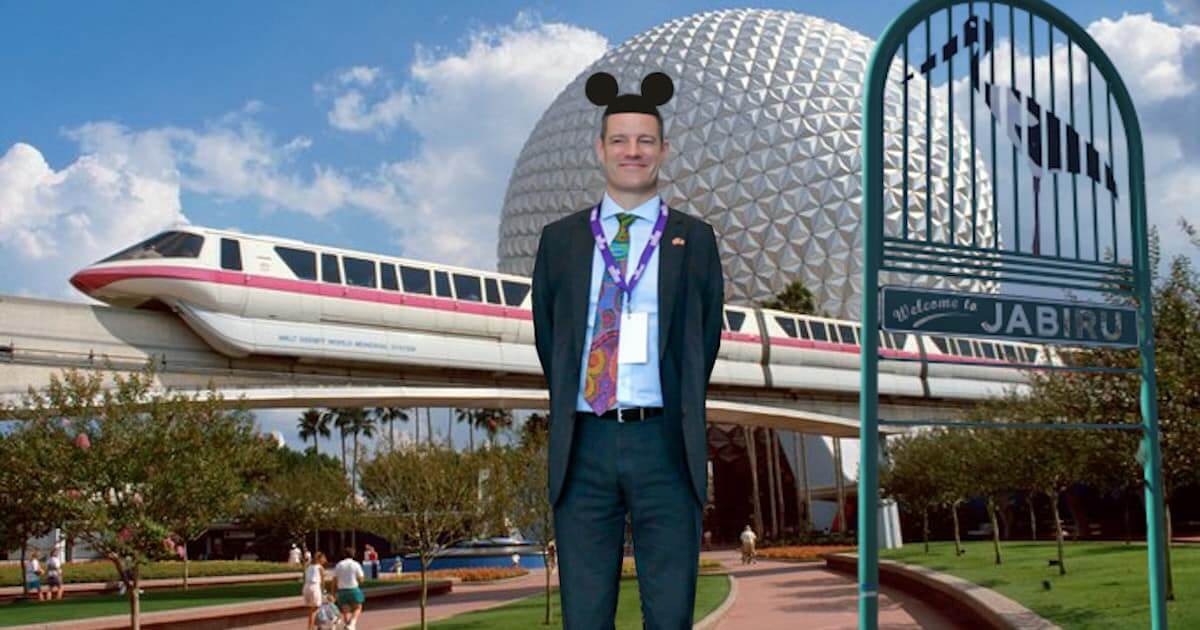 The Northern Territory’s second-most senior public servant Andy Cowan had a trip to Disney World paid for by a private company seeking government funds to build an interpretive centre at Jabiru which appears not to have been disclosed, the NT Independent can reveal.

The NT Government has strict rules around public servants accepting gifts, however it appears Mr Cowan did not register the free travel as a gift, despite his position on the Jabiru Steering Committee.

The NT Independent revealed earlier this month that Territory taxpayers originally picked up the bill for the trip to Epcot Centre in Orlando, Florida that Mr Cowan claimed was in the process of being reimbursed by “Kakadu Tourism” – eight months after the trip occurred.

ASIC records show Kakadu Tourism Pty Ltd is a private registered company with one of its directors telling the NT Independent the company ultimately paid for Mr Cowan’s trip so he would better understand the company’s Jabiru proposal before it made “representations” to the government for a portion of redevelopment money.

Questions have been raised over why the trip to an American theme park wasn’t disclosed on the government’s public servant gift registry and what perceptions that has created.

The NT Public Service Code of Conduct states that bureaucrats accepting gifts, including free travel from outside parties, must “not in any way be compromised or appear to be compromised by acceptance”.

“It wasn’t a gift; I asked him to go,” Mr Allert said, adding he was made aware by Mr Cowan that he was going to the United States on government business in November of last year.

“I asked him to take a diversion to Epcot so when we made representations to government he would know what I was talking about.”

Funds for $350 million Jabiru redevelopment yet to be distributed

Kakadu Tourism Pty Ltd is owned by the Gagudju Association, in partnership with Indigenous Business Australia. The private company has played a part in developing a masterplan for the proposed $350 million federal and Territory-funded Jabiru redevelopment project.

Exactly how much money the company will be given by the government for its involvement in the redevelopment build is yet to be determined.

Mr Allert said his vision for a proposed new Indigenous cultural centre at Jabiru included a “virtual reality” exhibit that would attract people to the destination.

He said he wanted Mr Cowan to experience it for himself at Epcot Centre – known as the “experimental prototype city of tomorrow”.

“My view was that we were looking for new product in Kakadu. There’s a plan to build an Indigenous cultural centre in Jabiru as part of the plan to develop Jabiru into a tourism hub,” Mr Allert said.

When asked why the company did not pay for the trip until eight months later, Mr Allert said: “I don’t know the answer to that. I asked him to send me the bill.”

Mr Allert added he received the bill recently and was in the process of paying it.

‘It would have to fall under the category of a gift’: retired senior NT public servant

Retired federal and NT senior executive public servant Bob Beadman said Mr Cowan accepting a trip to a Disney World resort from a private company in line for public funds may be seen to have an impact on his ability to make a decision on the scope and nature of the interpretive centre project.

“I wouldn’t accept a seat in a corporate box at Marrara stadium because it would compromise me,” he told the NT Independent.

“I don’t see how he can bring an impartial view to such a proposal having his fare paid for by the proponent.

“It would have to fall under the category of a gift.”

Mr Cowan declined to answer why the trip from a private company was not registered as a gift.

“Trip costs were under $1,000 and are being reimbursed by Kakadu Tourism. I attended as chair of the Jabiru and Kakadu Taskforce,” he previously said in a statement.

No record of a “taskforce” exists in publicly available government documents, however a document from 2017 states that Mr Cowan is one of four NT Government employees on the Jabiru Steering Committee.

Mr Cowan was in the United States last November as part of a taxpayer-funded $29,000 trip to spruik the Gunner Government’s proposed “commercial data centre hub” project that is yet to attract any private investment.

Travel documents show Mr Cowan parted ways with other NT Government representatives in Washington, D.C. but spent at least one night in Orlando before returning to Australia.

The NT Public Service Code of Conduct further states that a public servant “must avoid all situations in which the appearance may be created that any person or body, through the provision of hospitality or benefits of any kind is securing, or attempting to secure, the influence or favour of the Public Sector Officer”.

Mr Cowan did not respond to questions over whether he lived up to the expectations of the code of conduct.

According to internal Department of Chief Minister processes, any gift of travel would have to be signed off on by chief executive Jodie Ryan. Ms Ryan declined to answer questions, including whether or not she was aware of the trip and if it was registered as a gift.

Chief Minister Michael Gunner signs off on all international travel. He also declined to answer questions about Mr Cowan’s trip and if he knew a private company had paid for the Epcot Centre leg while Mr Cowan was overseas on official government business.