‘Through his windscreen like a bullet hole’: Terrifying rock attack on motorists near Bayview Sunday night 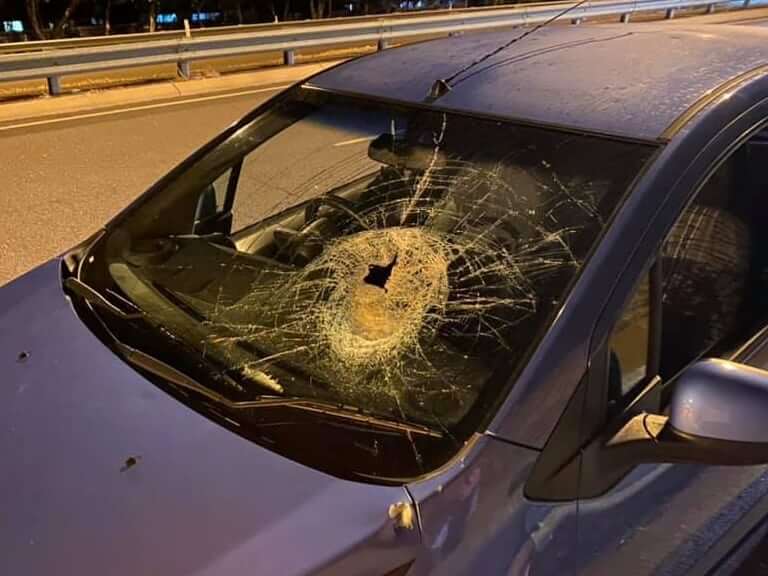 An horrific rock-throwing attack on around 20 cars on Tiger Brennan Drive near Bayview Sunday night has left dozens shaken, with witnesses calling the attack “frightening” and some picking glass shards out of their skin.

The alleged attack happened at around 8pm between the two Bayview turnoffs, witnesses said, as cars moved down the road unaware they were in the firing line.

Toby George, a civil engineering manager who is also the Country Liberal Party’s candidate for Port Darwin, said rocks thrown in the attack included one that “missed my daughter by 20cm” and a passenger from another vehicle had received “glass shards in his arm”.

Mr George said his vehicle was struck while his family were heading back into Darwin City after attending a function in Girraween.

“Our car was struck, there was a big thud, and we pulled over and saw there was about 10 cars in front of us … we had been hit by a large rock,” he told the NT Independent.

“It was frightening, these things happen and it’s not until you pull over and look where it hit … it struck the car around 20cms from where my daughter was asleep.

“Then I turned around and looked behind us and there was a bloke with glass shards all through his arm … the rock has gone through his windscreen like a bullet-hole.

Following the incident, Mr George said he saw several people from the attacked vehicles get out and chase the alleged perpetrators, who fled from Bayview towards to The Narrows.

The NT Independent has been unable to confirm the number of alleged perpetrators involved in the incident.

NT Police had not responded to the crime scene as of 9:30pm, with some people leaving before giving statements, Mr George posted on Facebook.

The police also did not respond to requests for comment on the incident.

Mr George said the incident had deeply impacted his family.

“I was born and bred here and I can’t ever recall this sort of thing happening,” he said.

“The rock that hit my car … near my daughter … was the size of half a football … I’d hate to see what they could have done.”