‘The public will be up in arms’: New $200M hotel proposed for Little Mindil 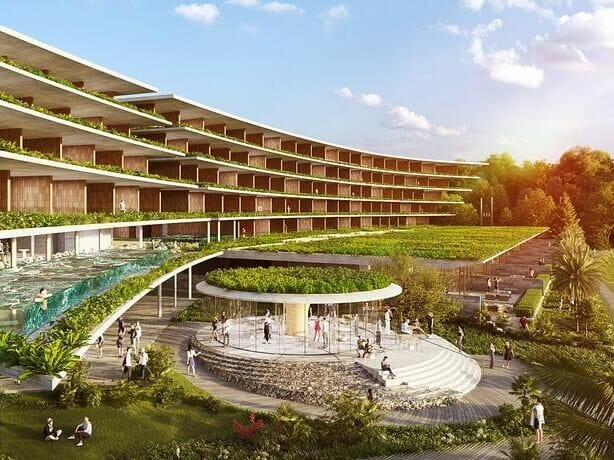 A massive $200 million hotel development proposed for the Little Mindil site is expected to reignite a fierce battle over public access to the area that was sold to SkyCity Group by the Henderson Labor government in 2008.

The companies said the hotel is expected to open in 2025, but it was unclear when they anticipated construction beginning.

A joint statement purported to be issued by AWI and Kita Group said the Foreign Investment Review Board had approved the joint venture acquiring the land from SkyCity.

But the plans are expected to be met with opposition as the site currently sits vacant as part of an agreement with the former Paul Henderson government in 2008, when the land was sold to SkyCity for $6.6 million.

SkyCity sold its Mindil Beach resort and casino to Delaware North in April 2019 for $188 million, but retained Little Mindil to be sold separately.

It was not disclosed what AWI and Kita Group paid SkyCity for the land that had reportedly been put under contract in 2019, nor what provisions would remain in place for public access to the 5.6 hectare site.

Planning Action Network convener Nick Kirlew said his group was still going over the details of the proposed hotel plans, which did not go to the public for consultation.

“The public will be up in arms, it’s totally ridiculous,” he told the NT Independent.

“Where is the honour in this? A former Chief Minister of the NT promised the public they would retain access to the foreshore at Little Mindil.

“At this time, we are unable to ascertain what the consequences of that will mean for this development.”

Mr Kirlew said PLAN would be looking closely at the proposal in the coming days and had 28 days to raise objections with the Development Consent Authority.

“We also have a meeting scheduled to discuss other matters with [Infrastructure] Minister [Eva] Lawler and this will be added to the list,” he said.

The sale of the site in 2008 sparked protests from community members who wanted it to remain a green space and local anglers who use the beach and creek access for fishing.

Larrakia Nation Aboriginal Corporation chair Richard Fejo said he had been shown the proposal and held concerns that he said could be dealt with.

“My concern would be with the sacred sites,” he said.

The NT News reported that AWI and Kita Group had pledged to conduct “engagement … with the Larrakia Nation to incorporate and acknowledge local custodians through naming, design and work opportunities”, but made no mention of consulting over sacred site issues.

“We are seeking to set a new benchmark in hotel excellence attracting new visitors to the Top End both domestically and internationally when there is a travel rebound as borders reopen,” a spokesman was quoted as saying.

The proponents said construction was expected to generate 350 jobs with another 120 ongoing jobs post-construction.