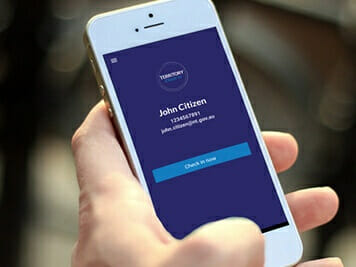 Chief Minister Michael Gunner has blamed a single public servant for the government’s failure to notify Territorians they had been at exposure sites through the Territory Check-in app and has moved the employee back to the public service instead of sacking them.

Mr Gunner told a press conference that he had been made aware that users of the app have not been notified they had been at a venue at the same time as a COVID-19 positive person – the very reason the app exists – because of a “reporting failure”.

He did not say how long the “reporting failure” had been ongoing with the app that was designed to send automatic messages to people if they had been at the same place as an infected person.

“There is no excuse for this,” he said.

“It was a clear decision and a clear direction by the security and emergency management committee.

“The person responsible for tasking this decision has been stood down from the emergency operations centre and will return to regular duties.”

He cautioned that if a person receives a message, it does not mean they have COVID, but should treat the message as a warning to be extra cautious and get tested if symptoms develop.

“Territorians have a right to be told when they have been to an exposure site, I am sorry this did not happen,” Mr Gunner said.

“Nothing excuses it. It will happen now.”

By Friday night, people who had received notifications said that it was vague and did not include the date or the location where they had come into contact with someone who had recently tested positive for COVID-19.

The Opposition CLP said the failure to inform people of possible exposures shows the Gunner Government had failed “emergency management 101″ and put Territorians’ lives at risk.

“[The government] stopped listing exposure sites on the website before verifying that the text messages were functioning as planned and this puts Territorians lives further at risk,” CLP health critic Bill Yan said.

“The Chief Minister and Health Minister continue [to] emphasise how important it is for every Territorian to do the right thing and check-in everywhere they go, but can’t be bothered to check up on their own system for over a week.

“Why didn’t the government advise us of who will be contacted from 3pm today? Are they people who were exposed over a week ago? How many Territorians have been exposed that should have received text messages?

“This is Emergency Management 101 and any apology is a hollow one if there is still information missing.

“It’s yet another example of the COVID chaos that the Gunner Government continues to inflict upon Territorians.

“Michael Gunner, Nicole Manison and Natasha Fyles are all implicated in this latest fiasco and should resign for their incompetence and mismanagement of the whole situation.”

Meanwhile, the NT recorded 546 new cases to 8pm last night. There are now 27 people in hospital with COVID-19, up three from yesterday. There are more than 3,000 active cases across the NT, with three quarters of those in the Greater Darwin area.

Lockouts remain in Yuendumu and Yuelamu and have been extended by five days to next Thursday. There were no new cases in Amoonguna, which entered a lockout after recording 16 cases on Thursday.