Details of a teenage boy who spent six hours in surgery for injuries sustained after the motorbike he was on was hit by another bike on the Finke Desert racetrack, was not made public by the NT Police, despite the media unit issuing a statement about a similar crash earlier in the day, his family has said.

Mr Joy said the teen was riding his 125cc motorbike on the Finke course about 80km from the start, after 5pm on Saturday, (the day before the race began) when he saw another rider come towards him.

“In the distance we saw a bike coming towards him,” he said.

“He moved over to the side of the track to get out of the way but the bloke was travelling fast, and he made an attempt to avoid him but he was just going so fast he smashed into him.

“The estimated impact speed was about 80km/hour.

“They both came off their bikes and were laying on the track. Cormac was lucky he was wearing all the proper safety gear.”

Mr Joy said tourists who were driving past used a satellite phone to call an ambulance and lay with the boy on the track. The ambulance attendants stabalised the boy before taking him to hospital, Mr Joy said.

He said he did not know if the man had been drinking because he said NT Police did not do a blood alcohol test and he thought they were not considering any charges against the man.

Mr Joy previously worked in the Territory Response Group, and led the Immediate Response Team’s initial task force, and was also a federal agent in the Tactical Response Team.

He has been an outspoken critic of the NT Police executive, including writing a recent opinion piece about what he said was how police failed in Yuendumu the night Kumanjayi Walker was shot and killed by Constable Zach Rolfe in an arrest attempt. 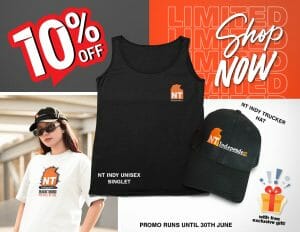 He was also asked why a press release was not issued despite one being issued for a similar crash that happened on the same morning between two motorbikes near Finke.

The NT Independent also asked Mr Cross if Mr Joy’s public criticism of NT Police and the Police Commissioner Jamie Chalker influenced the decision not to make the crash public.

Mr Joy said Finke bike race winner David Walsh, a hero of his stepson, took time to visit him in hospital and gave him team shirts and hats.

But the man who crashed into him, and was in the same hospital with a dislocated hip and collarbone, did not contact the family.

The boy’s mother is a former police officer, and his father is a police officer. Mr Joy said general duties members including the shift sergeant went to the hospital Saturday to offer support, and the welfare officer – a role other sources say has now been taken away by the Police Commissioner – called to check in, but there had been no contact from the NT Police executive or the Northern Territory Police Association.

NT Police did answer whether the welfare officer role had ended.

He said Cormac was fortunate there was a surgical professor at the hospital because of the race.

“He will have a fairly long recovery, which will be hampered because he can’t use crutches because of his hand and arm, and can’t really use a wheelchair because he needs to have his leg elevated.”