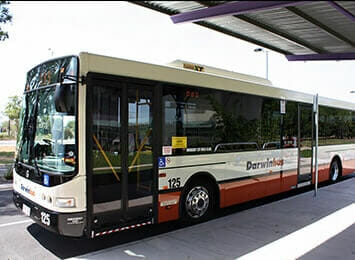 A female teenager was allegedly punched in the face by a 21-year-old man in an “unprovoked attack” onboard a bus from Casuarina, Wednesday evening, NT Police said.

NT Police Watch Commander Len Turner said the 16-year-old girl and her friend boarded a bus from the Casuarina bus interchange to travel to Karama at about 8.40pm.

“Soon after this bus took off, this man started acting strange and was shouting out on the bus and without warning he’s punched this girl to the head,” Cdr Turner said.

“There was commotion in rows with the passengers doing their bit in subduing the offender.”

Cdr Turner did not mention if witnesses may have heard or understood what the man was shouting towards the teenage girl.

It’s understood they did not know eachother.

He said transit officers were called and took the offender into custody and handed him to the police.

The man was detained in police custody and is expected to face aggravated assault charges today.

The unprovoked bus attack follows a spike in youth crime incidents in the Casuarina area recently, including a 78-year-old pensioner attacked in the area after leaving a bus by three teen girls who tried to snatch her purse after knocking her down.

Police earlier said they have increased their presence in Casuarina as a result of the spike in youth crime.

Meanwhile, a 19-year-old male was arrested on Wednesday night in the CBD following a brawl with a security officer after he was apprehended for “engaging in an incident” with a female, police said.

Cdr Turner said around 11:30pm on Wednesday, the offender was witnessed being involved in an undisclosed incident with a female.

“Security members at the CBD flat approached his male. He then armed himself with a two-meter pole and approached security while threatening them,” he said.

“He began to chase and attack the security officer. He managed to avoid being hit and made a technical disengagement.”

Police took the man into custody.

The man will be charged with assaulting a worker armed with an offensive weapon, engaging in violent conduct, and breach of bail.

Police did not mention the outstanding charges facing the teenage offender.