‘Something’s going wrong and again we’re not hearing from the government’: Finocchiaro 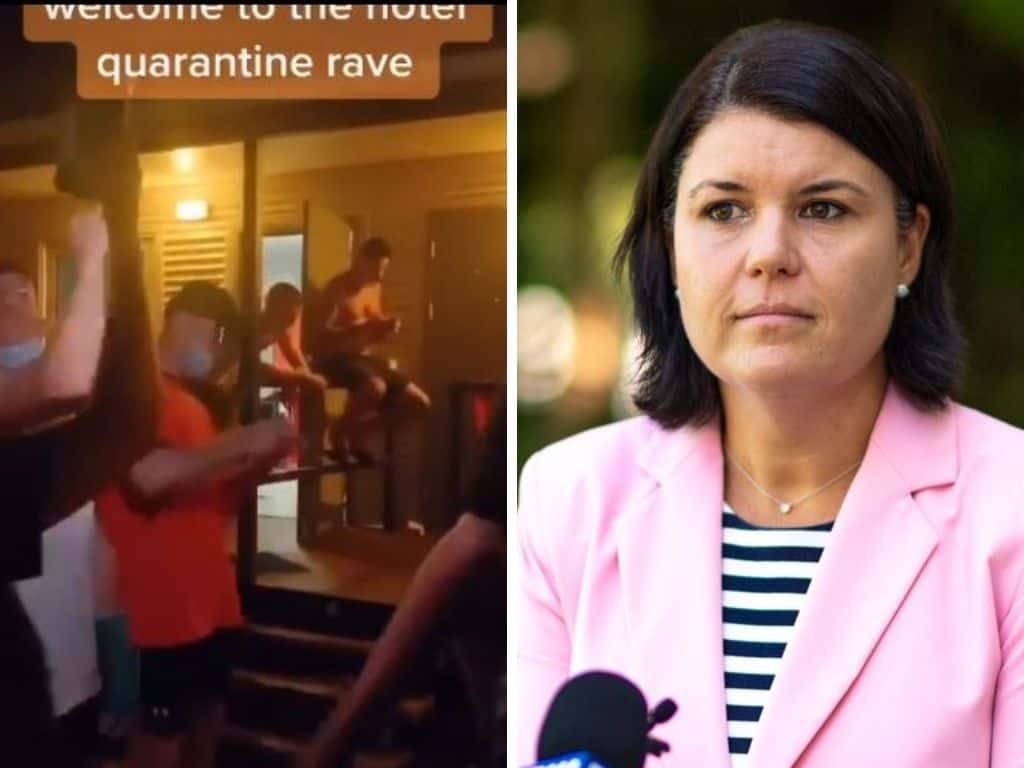 CLP Opposition leader Lia Finocchiaro says Health Minister Natasha Fyles needs to say what improvements have been made to make sure there’s no repeat of the party at Howard Springs COVID-19 quarantine facility that led the Australian Medical Association NT to call for an urgent review of the system.

NT Independent highlighted a TikTok video last Friday which shows a group of about 20 people partying in close proximity at the facility, with some ignoring the rule to wear masks.

At the time the NT Independent raised the issue AMANT president Robert Parker said flouting quarantine health rules was risky and called for an urgent review into management of the facilities and their standards.

“The whole purpose of quarantine is to sit for two weeks to see if symptoms appear and not pass them onto anyone else,” he said.

“People are supposed to be sitting on their balconies, and we need staff to monitor that.”

He said the video was “probably the tip of the iceberg” of bad behaviour in the centre.

Questions to Health Minister Natasha Fyles went unanswered last week and the NT Independent on Wednesday again put questions to the minister about what went wrong and what processes have changed but she gave no response. The Government’s COVID-19 operations centre also did not respond to questions.

The ABC also reported the offices of Chief Minister Michael Gunner and Health Minister Natasha Fyles did not respond to their questions about the same incident four days ago, referring them to Government’s COVID-19 operations centre which also did not respond. And un-named spokesperson said they could not because police were investigating.

While the NT Health Department also gave the same excuse to SBS.

The NT News reported one of those involved, who went by the name Declan, said the the group were provided a cake by staff to celebrate a birthday and they were not wearing masks so they could eat the cake provided by the quarantine facility. He said the party was shut down by security.

The paper also did not get a response from Government.

To date, the Gunner Government hasn’t made an official statement about the “rave party” incident.

However the Government is negotiating with the Federal Government to use the facility to quarantine some of the Australians who have been stuck overseas because of COVID-19, and want to return home, putting it in the national spotlight.

The Department of Foreign Affairs and Trade told media that three-quarters of the 38,200 Australians overseas registered with the Federal Government said they wanted to come home.

They’re not being open and transparent with Territorians

Ms Finocchiaro admitted she hadn’t seen the video despite it being all over the news over the weekend.

“No. I haven’t seen the footage, but I’ve certainly heard a lot about it and people are absolutely appalled,” Ms Finocchiaro said in an interview with Mix 104.9 on Wednesday.

“Something’s going wrong and again we’re not hearing from the government on what those issues are.”

“They’re not being open and transparent with Territorians around where the system failure was or what improvements they’re going to make to ensure it doesn’t happen again.”

“It’s called into question, the government’s controls around what is going on inside that facility. You know people are unable to leave which is very important but equally the behavior on the inside needs to be appropriate given the level of risk that people at the facility have,” Ms Finocchiaro said.

“We certainly hope this is a wakeup call to the Health Minister and Minister for National Resilience around not taking their foot off the pedal and ensuring that robust controls are in place and if improvements need to be made, then so be it.”

Ms Finocchiaro has accused the Gunner Government’s minister’s for not taking responsibility for their portfolio areas.

“We’ve got ministers burying their head in the sand. They’re not stumping up and taking responsibility for their portfolio areas and that’s not a good start to four more years of government.”

Speaking with Katie Woolf on Mix104.9 on Friday Ms Fyles said she had not seen the video, “the way it’s just been explained to me does raise some concern”.