A worker in Nhulunbuy had their leg crushed on Wednesday after strong winds blew a tarpaulin against temporary shelving which fell on the man, NT Work Safe has said.

NT Work Safe communications manager Peter Chan said the authority was notified of the injury by the employer on Wednesday, as required by the Territory’s work health and safety laws.

“The details reported in the media are incorrect. An excavator bucket did not fall onto the worker’s leg,” he said. 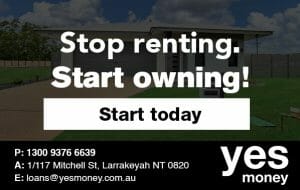 “NT WorkSafe’s preliminary enquires indicate workers at the worksite had strung up tarpaulin as protection from the wind and rain. Strong wind has blown the tarpaulin against temporary shelving, which has subsequently fallen onto the worker and injuring his leg.”

Mr Chan still the authority was still investigating, and and the outcome would determine the appropriate regulatory response.

“NT WorkSafe reminds all workplaces to secure materials and equipment on worksites to ensure they are not impacted by strong winds and become a hazard,” he said.