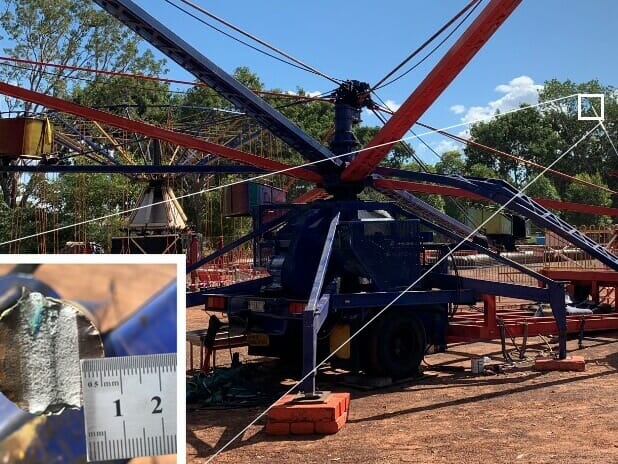 A Darwin amusement ride operator has been charged by NT WorkSafe over a 2019 Freds Pass Show incident that injured two people, allegedly due to defects in the ride that put people “at risk of death”.

NT WorkSafe said in a statement that an investigation into the Octopus Ride identified “a number of defects” that made the ride “inherently dangerous”.

On May 18, 2019, one of the tension arms on the ride broke, sending an attached gondola to the ground injuring both passengers.

The subsequent investigation found the defects in the sweep arms and tension rods of the ride, as well as that the ride’s brakes were “compromised due to a lack of maintenance and repair”.

It was also alleged that the ride did not receive the required maintenance and lacked a “safe system of work” to ensure the safety of workers and passengers.

“NT WorkSafe will further allege that supplying and operating the Octopus Ride with the defects identified in the NT WorkSafe investigation was inherently dangerous and put the workers, passengers and other people near the ride at risk of death or serious injury,” a statement said.

Mr Taylor could face a maximum penalty of $1.2 million if found guilty. The matter is listed for a mention in Darwin Local Court on June 24.