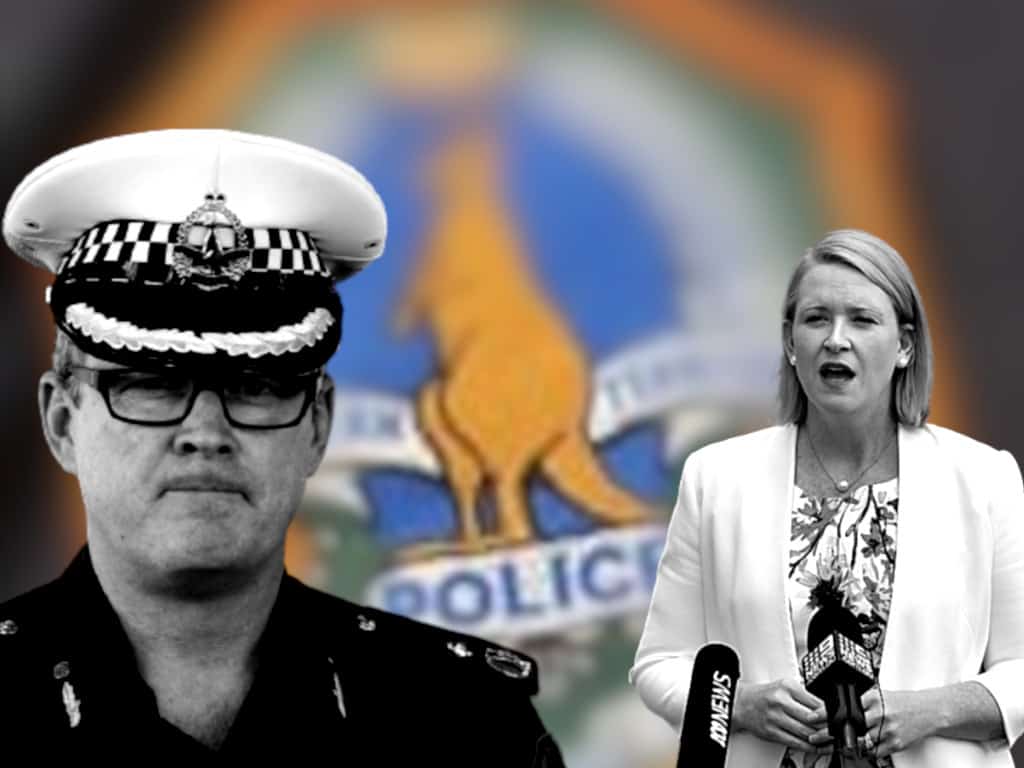 NT Police commissioner Jamie Chalker says police could be arresting some young offenders in Alice Springs “two to three times” a day but can’t say for sure because retrieving stats of arrests is “not straight forward” and would mean taking police off the streets to provide accurate data.

Opposition leader Lia Finocchiaro grilled Police Minister Nicole Manison and Mr Chalker in Budget Estimates hearings over figures released last week that the government said showed Strike Force Viper was having a positive impact on out of control crime in the town.

She said the government’s continued inability to release broken down stats was alarming.

“There is a huge concern in the community that repeat offending is rife, that we have this revolving door that police are having to be in contact with people and then they’re back on the street,” Ms Finocchairo said.

“I think it’s a matter of public importance that we know how many times are police having to pick up the same person. This goes to the heart of our youth justice laws and the changes your government made two years ago. This is no reflection of police who work extremely hard.”

Ms Manison last week released figures that claimed there had been 217 “prosecution files” but did not provide a breakdown of how many people that included or if they had been re-arrested while out on bail. On Tuesday, Estimates heard there had been 244 apprehensions by Strike Force Viper between October 14 and December 6.

Mr Chalker said first time offenders and 14 recidivist youths were responsible for those orders, although he was unable to say how many times each offender may have offended and finding out would be onerous on police.

“I’m just conscious of the balance of my police resources serving and protecting the community versus providing that level of detail,” he said.

“The fact is Operation Viper as a team are gonna have to be the ones to provide this level of response down to the minutiae you’re requesting. [They’ll] have to do a manual dive.”

Ms Finocchiaro said she did not want to see officers taken off the frontline for office work, but questioned why the data that would show how many times a young offender was apprehended between October 14 and December 6 was not easily available.

Mr Chalker said they do enter “data sets” into the PROMIS system “as it relates to an arrest of an individual”.

“But what I’m saying is if we arrest someone two to three times in the course of a day, that will be a manual process for us to go back through that individual [officer] to understand the frequency of which they’ve done that,” he said.

She took a number of questions regarding the break down of stats on notice, meaning she will have to provide the data by next month.

“Certainly the feedback I’ve had from people in the community … has been that they have seen the impact of Viper and that is has had very strong results,” Ms Manison said. “Certainly, speaking to the officers in Viper they say they have seen the results of their work as well.”

Independent Member for Araluen Robyn Lambley said her community was not yet convinced Operation Viper was a success and criticised the Minister for not holding a public forum while in Alice Springs last week to hear from concerned residents.

“I think most people in Alice Springs are yet to be fully convinced. To say it’s been successful is probably a bit premature at this stage,” Ms Lambley said.

Ms Lambley requested the number of prosecution files in the seven weeks before Operation Viper was established to provide some context of how effective the strike force has been. That question was also taken on notice by Ms Manison.

Ms Finocchiaro said outside of Estimates that Ms Manison’s inability to provide proper crime figures after being warned by the Opposition they would be seeking them was done to “skew the scale of the crisis”.

“These were not new questions,” she said. “I have asked similar questions in Parliament and in the media and the Minister should have been prepared.

“People want to know the truth around repeat offending and bail and the impact of the government’s youth justice changes that water down bail. Yet, all the Gunner Labor Government offers is meaningless data.

“It’s important the information around how many youths are being arrested, whether or not they’re then bailed, diverted or imprisoned, is provided. It’s in the public interest.