Police seize 34 bottles of Bundy and bourbon, 54 grams of weed on way to Wadeye 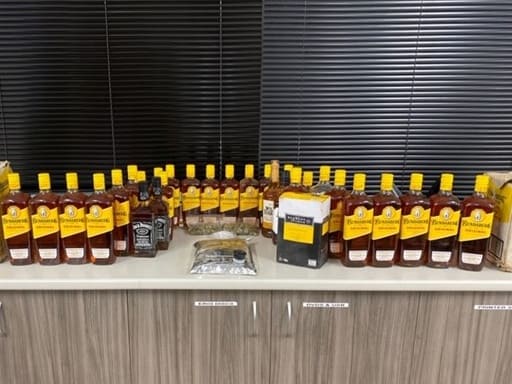 Authorities have intercepted a smuggling attempt involving a massive amount of hard liquor and cannabis into Wadeye Thursday night.

Following traffic check-points conducted by the Wadeye Police Station targeting those illicitly taking alcohol and drugs into the community, a total of 34 liquor bottles were seized – 24 of which were taken from one vehicle alone, police said.

A total of 54.1 grams of cannabis were also intercepted during the check-points, police said.

NT Police Acting Senior Sergeant Anthony Clarke said getting the booze and drugs out of the community would help reduce harm.

“Police will continue to work closely with community members and maintain proactive duties, so we can work together in reducing the harm caused to our remote communities,” he said.

Wadeye is Australia’s largest indigenous community and one of the Northern Territory’s poorest and most troubled, with roughly 2600 residents and a notorious history of gang violence.