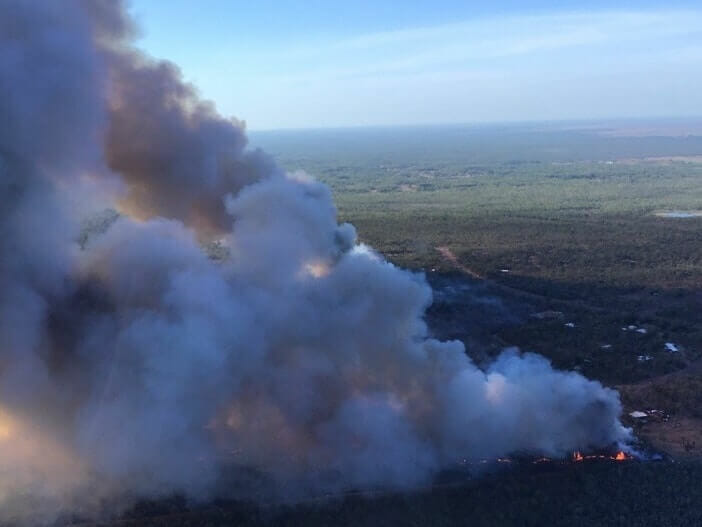 One man is under investigation for allegedly starting a fire at Adelaide River that threatened nearby residents and properties, NT Police say, while a Humpty Doo man was fined for starting an illegal burn pile in the middle of catastrophic fire conditions.

Authorities were reportedly tipped off by a member of the public in relation to the Strickland Road fire Thursday morning which they described as “suspicious behavior.”

NT Police Incident Controller Superintendent Daniel Shean said police were questioning the man regarding his alleged involvement with the fire.

“We have had one person who is under investigation at the moment for a fire (Thursday) morning,” Supt Shean said.

Supt Shean said the man is not a local resident of the Adelaide River area but did not confirm where the man resides.

The fire had caused the Stuart Highway to be partly closed and put further strain on already stretched resources.

Fire crews were responding to four fires on Thursday of concern.

“We’ve also got a number (of resources) in Batchelor and Adelaide River areas helping out, in terms of road closures and also detection of people who may be lighting fires, and also ensuring the safety of the public, where fires are approaching,” Supt Shean said.

Bushfires NT aerial units had the blaze under control by later in the day Thursday and the highway was reopened.

Major re-ignition is unlikely to happen but firefighters remain on patrol, they said.

Meanwhile, a Humpty Doo man has been fined for allegedly conducting an illegal burn pile in the middle of catastrophic fire conditions and bans in place.

NT Fire and Rescue Services said they observed smoke from the burn pile in the man’s residence and immediately extinguished the fire.

NTFRS has reminded Territorians that it is illegal for fires to be lit on a total fire ban day.

Supt Shean urges the public to call the police on 131444 or, if its an emergency, triple-0 if they notice something suspicious in relation to the deliberate lighting of fire.

He also warned those who break the regulations on a total fire ban. According to NT Laws, if someone starts a fire during a fire ban period, even if it starts from a cooking fire, they could be charged the maximum penalty or face imprisonment.

The Top End of the NT is expected to continue to be under catastrophic fire conditions until at least Sunday as high winds and dry conditions keep fire crews battling blazes and on high alert.