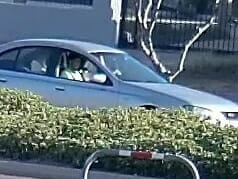 NT Police have ramped up their search for the driver of a silver Ford Falcon who allegedly struck a five-year-old on Monday afternoon and fled the scene along Vanderlin Drive.

Police released a clearer image and video of the vehicle and person of interest captured on CCTV prior to the crash on Wednesday afternoon and reiterated their calls for anyone with information as to the identity of the driver to contact police immediately.

“Anyone who recognises the vehicle or driver is strongly urged to come forward,” said Brendan Lindner, NT Police’s Officer in Charge of Major Crash Investigation Unit.

“We have received numerous leads from the public thus far and hope that these clearer visuals will assist us in locating the person of interest.

“We are keen to identify similar vehicles which have sustained front end damage or been repaired this week.  If you are aware of any similar vehicles in your area which are not parked in their regular place this week, we appeal to members of the community to provide us this info also.”

Police said the car was heading towards Casuarina at around 5:25 pm near the Leanyer waterpark when the incident occurred.

Witnesses provided first aid before St John Ambulance arrived. The boy was taken to Royal Darwin Hospital where he remains in a stable condition with broken legs and arm injuries.

Anyone with information or CCTV or who was travelling in the area, particularly vehicles with dashcam footage, is urged to contact police on 131 444 or CrimeStoppers 1800 333 000, quoting reference number 9428828.