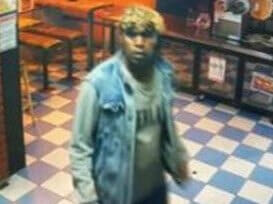 Police have released a CCTV image of a man they are looking for over a series of grog robberies from Alice Springs businesses over the weekend.

Detective Senior Sergeant Evan Kelly alleged the man, who they have not identified, forced his way into an unnamed licensed premise on Traeger Avenue just after 3am Sunday and filled a shopping bag with bottles of alcohol then fled the shop.

Police described him as a tall Aboriginal man, with bleached curly hair, and wearing a sleeveless denim jacket, grey long sleeve shirt, and black and white sneakers at the time of the incident.

“Unfortunately this business, along with the three others which were targeted by offenders, sustained a significant amount of damage as a result,” Snr Sgt Kelly said.

“We are yet to determine if the offender/s responsible for this incident are linked to other unlawful entry incidents which targeted other licensed premises throughout the weekend.”

Snr Sgt Kelly said two of the other premises were in the Alice Springs CBD, while the other was in Larapinta. He added that from 6am on Friday to 6am on Monday, were 14 break-ins reported to police in the city.

This comes three weeks after NT Police pledged to institute a 24/7 police presence in the Todd Mall and increase foot patrols around Alice Springs CBD.