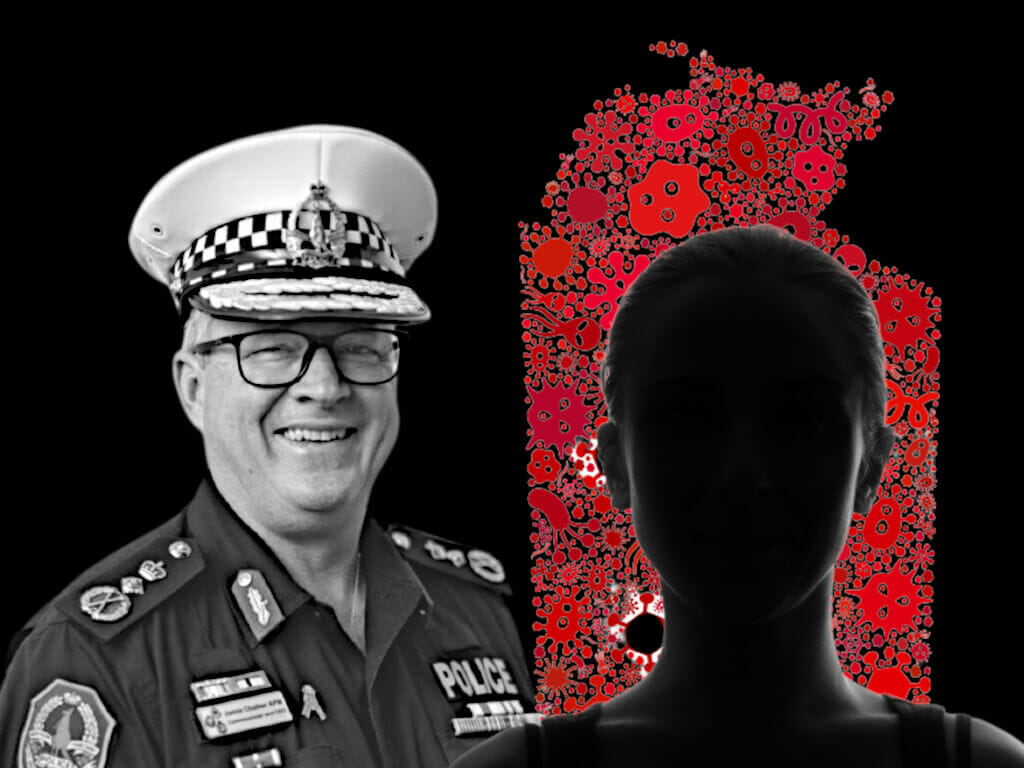 NT Police Commissioner Jamie Chalker has seemingly said the Major Crime Unit will be investigating possible charges against a 21-year-old woman who allegedly brought COVID-19 to the Territory last month, which has now resulted in the death of a woman, but his statement was unclear and he told reporters at a press conference he did not want “things” going into the public domain.

At a press conference this morning, Chief Minister Michael Gunner said an unvaccinated woman in her 70s from the Binjari community died about 11.30pm on Thursday in Royal Darwin Hospital. Hers was the first death in the Territory associated with COVID-19

Mr Chalker spoke in a rambling, cryptic way when announcing a police investigation following the death.

“Unfortunately this death does apparently have links to a breach of chief health officer directions,” he said.

“It seems to be the seed which started the spread of COVID within the Northern Territory. And as such, Major Crime are now undertaking an investigation.

“Because of that I won’t speak any further in respects of it. I know that you all will understand we’ve got to go through the process of a fulsomeness investigation.

He did not explain to the journalists he was talking to exactly what he did not want in the public domain.

His response became stranger when asked by a journalist if the investigation was to do with the well-publicised border breach by the woman who sparked the outbreak.

“We will now investigate to identify what the causation may have been that ultimately led to COVID being contracted by the lady that passed away last night, and whether there’s any criminality in relation to that.”

In early November, Mr Gunner said the 21-year-old woman was issued with a $5024 infringement notice after she was questioned by police for five hours for allegedly lying on her border entry form.

“She will pay because she lied to officials,” he said at the time.

He was forced to apologise for a post on his Facebook page that stated the woman was a sex worker. The woman denied the claim in the media.

“The information which was published at approximately 5pm today, was factually incorrect and was published in error,” the statement said.

“We apologise for that error and the correct information is below.”

There was no mention of what specifically was incorrect, however, screen shots show the references to the woman being a sex worker were deleted, along with other alterations.

Neither Mr Gunner, nor the government have ruled out that the woman is a sex worker.

Questions sent to his office seeking clarification were not responded to.

There have since been 64 cases of COVID-19 in Darwin’s rural area, Katherine, Robinson River and Lajamanu, with lock downs, lockouts and mask wearing brought in across the Territory at various times since the current outbreak started on November 4.