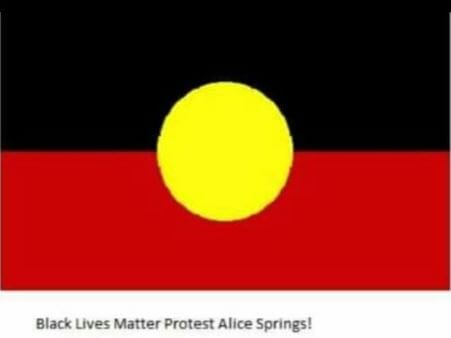 Police will be monitoring a series of Black Lives Matter protests and vigils in Alice Springs on Saturday, with the Northern Territory Police Association warning against comparing the situation in the United States to what is happening locally.

Organisers of the Alice Springs events say the events will be held in solidarity with protesters in the US, following the death of George Floyd and will also highlight comparisons between Mr Floyd and police brutality in Australia and Aboriginal deaths in custody.

A peaceful vigil will coincide with planned rallies around Australia and be held at the Mpartnwe’s Court Lawns at 2 pm.

“This event is about truth telling and acknowledging institutional racism and wrongs that have historically occurred and continue today,” the event’s Facebook page said.

“We must speak the truth openly for healing, awareness, education and solidarity to occur in all of our society.”

Another Black Lives Matter protest will take place at the entrance to the Yeperenye Shopping Centre on Saturday at 12pm.

However NTPA president Paul McCue said the two situations were markedly different and was hopeful police keeping an eye on the events weren’t “given a hard time”.

“While people are trying to align what’s going on over in America with what’s going on here, in our view that’s complete nonsense and there’s no evidence to support that,” he told ABC radio.

“Obviously everyone is watching what’s happening over there but we know our police over here are well respected and well liked.

“The community of the Northern Territory fully respect and appreciate the work our police officers do … they are as unified as ever in their commitment to keeping the community safe.”

The protests will follow comments made by NT Senator Malarndirri McCarthy that there were similarities between the US and Australia when it came to black people’s deaths at the hands of police.

“The death of George Floyd is felt here by First Nations people,” she said.

“We only have to look at deaths in custody on Palm Island in Queensland and Kumanjayi Walker in Yuendumu in the NT last year to know that these feelings are very real and very raw.”

“We’ve seen some irresponsible commentary in my view,” he said.