Authorities are looking for a group of Alice Springs teens captured on CCTV allegedly attacking two female tourists and a woman on a bike overnight.

Northern Territory Police have released images from CCTV footage in an appeal to the public for more information.

In a media statement, Detective Acting Senior Sergeant Carmen Butcher said the footage identifies a woman who was targeted by an unknown youth who attempted to “snatch” the woman’s handbag while she walked with a bike along Gap Road around 9.30pm.

“The youth along with several other unknown youths were observed walking off from the attempted bag snatch and approaching two female tourists in a camper van parked in a car park along Gap Road and Stuart Terrace,” Detective Acting Senior Sergeant Carmen Butcher said.

Snr Sgt Butcher said that about 20 youths surrounded the vehicle before they allegedly assaulted both tourists, whose nationality were not disclosed, aged 19 and 24-years-old and stole a bag.

“CCTV operators alerted police to the incident and crews arrived on scene within minutes causing the group to scatter and the bum bag to be dropped nearby,” he said. 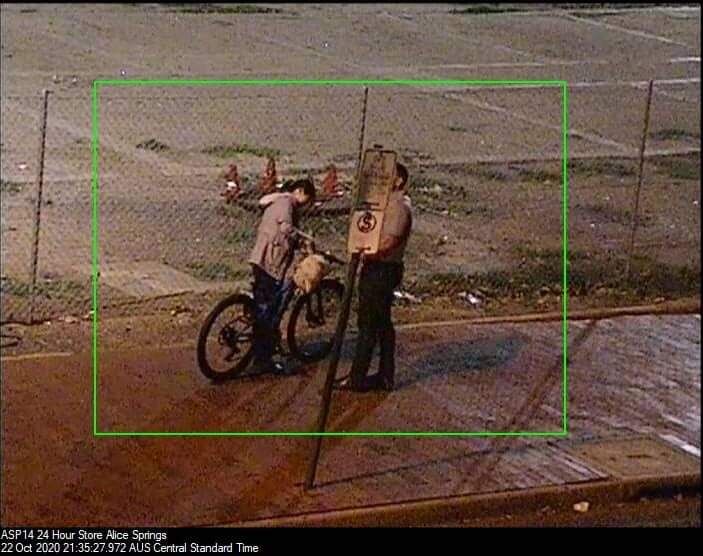 Northern Territory Police have released an image of a woman they wish to speak to in regards to a series of incidents including stealing and assaults that occurred in Alice Springs overnight. Picture: NTPFES.

Police did not detail if anything was stolen from the bag.

“The initial stealing incident occurred not far from a set of traffic lights, so we’re sure there would have been motorists who saw the incident and may be able to assist with identifying those involved,” Snr Sgt Butcher said.

“CCTV footage shows two women getting in a car parked next to where the incident occurred.

“We would appreciate them contacting us as they may have details which could assist with identifying the youths involved and in turn help with investigations into the indecent assault and stealing.”

NT police are urging anyone with additional information to come forward by contacting  131 444 or report the incident anonymously via Crime Stoppers on 1800 333 000 and reference PROMIS 9459315.