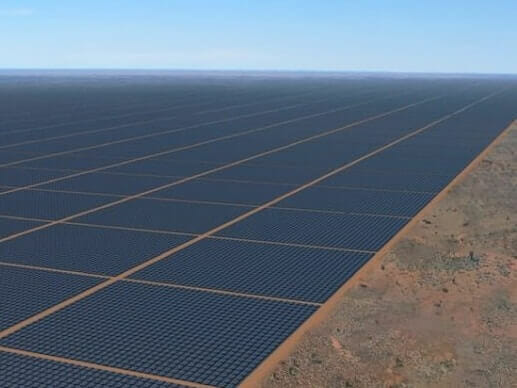 Newcastle Waters Station in the west Barkly region near Elliot has been revealed as the location for the proposed $20 billion Sun Cable solar project – billed as the world’s largest solar farm.

The company’s CEO told the ABC they have recently made referrals to the NT Environment Protection Authority to get approvals in place, despite not expecting construction to commence for another three years.

“We’ll be using thousands of hectares of land, and we need to closely examine the impact on the ground at the solar farm end,” David Griffin said.

“There’s a lot of black soil in that country, but that’s a bit problematic for us, so we’re [planning to build] on a substantial area of soil that’s a bit different and a bit friendlier for us to construct on.”

However, construction is not expected to commence until late 2023, the company said.

While being heralded by the NT Government as a cornerstone of future development and a much-needed economic boost for the NT, the company is also yet to make a final investment decision.

If construction starts in late 2023 as planned, solar energy is expected to reach Darwin in 2026 and Singapore the following year.

According to Paul Purden, the NT Government’s executive director of environmental assessment and policy, the NT EPA hasn’t assessed many large land clearing proposals such as the Sun Cable’s ASEAN Power Grid.

“The reason why the proponent Sun Cable has decided to initiate this referral themselves is because they can see this is a large proposal that includes a large amount of clearing and other components,” Mr Purden told the ABC.

“So they’re getting onto the front foot to say ‘We think these need to be assessed’, and allow the environmental impact assessment process to demonstrate they can manage any impacts to an acceptable level.”

In July 2020, the Federal Government granted ‘Major Project’ status to Sun Cable’s proposed Australian-ASEAN Power Link (AAPL) that could see Australia as the leading exporter of power generation from solar electricity, supported by the world’s largest battery & solar farm in the Barkly region.

By the end of 2027, Sun Cable predicts the AAPL to export around AU$2bn (US$1.44bn) of solar energy per year to Singapore, connecting Australia into the ASEAN Power Grid.

It will provide dispatchable renewable electricity to the Northern Territory and will supply up to 20% of Singapore’s electricity demand, the company said.

It is also possible that “additional or alternate solar farm sites” would be identified during the development process, Sun Cable representatives said.