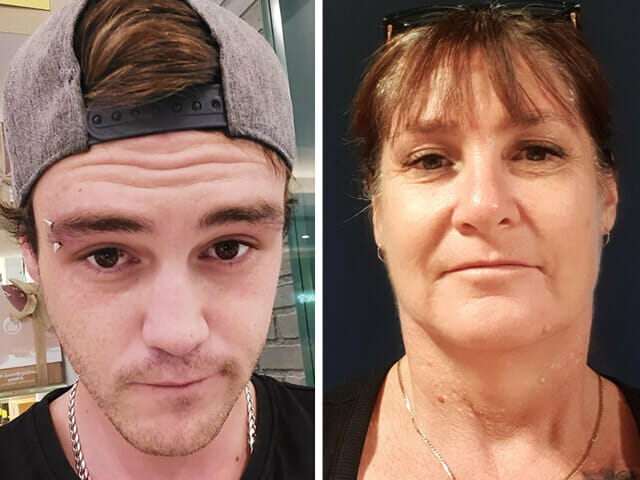 UPDATED: NT Police have formally charged 23-year-old Josh Mason and his 50-year-old mother Deborah Mason with a string of offences including misconduct with a corpse and attempting to pervert the course of justice for their alleged involvement in a hit-and-run on the Stuart Highway that killed a woman and severed her leg on Monday night.

Police alleged Mr Mason drove the vehicle that hit the woman and that his mother assisted him in attempting to dispose of the body, but left behind the victim’s severed lower leg that sparked an investigation.

The pair appeared in court on Friday, represented by lawyer Peter Maley.

Mr Maley said Josh Mason intended to make a guilty plea to the charges, which include hit and run, misconduct with a corpse and destroying evidence.

Mr Maley said Ms Mason would be applying for bail later in the afternoon but that was later denied.

He said both would be looking at pleading guilty to the charges.

At the later hearing, Judge Therese Austin said the evidence against the pair was “overwhelming” and that both showed “a callous disregard” for the life of the victim.

The court heard that Mr Mason had struck something on the road while driving and had searched the area but did not discover what he had hit. His mother is alleged to have driven with her son back to the scene of the incident later on Monday night.

“It was then that they discovered that indeed there was somebody who had been struck, it was a person and she was deceased,” Ms Austin said.

It was alleged they then put the body in a car and disposed of it without any intention of calling the police.

Police were notified of a severed lower leg on the side of the Stuart Highway near Coolalinga by a passing motorist on Tuesday morning, sparking the investigation that later uncovered the body of an Aboriginal woman “partially concealed” near bushland on a Jenkins Rd property in Virginia late Wednesday night.

Prosecutor Jessica McLean said investigators had found blood in one of the vehicles seized and that there were witnesses stating that the pair had attempted to clean a ute, resulting in bloody towels that were later discovered by police.

She added that Ms Mason had “moved the body to avoid her son getting caught”, showing “complete disregard for the victim”.

“There is a concern that had the leg not been discovered this person would have just been a missing person statistic,” she said.

The mother and son were arrested on Wednesday afternoon at different locations.

Mr Mason has been charged with hit and run, two counts of misconduct with regard to a corpse, attempting to pervert the course of justice and destroying evidence.

His mother was charged with misconduct with a corpse, destroying evidence and attempting to pervert the course of justice.

Both will return to court on June 14.

“Detectives thank the public for their assistance in this case,” Detective Senior Sergeant Paul Morrissey said. “The information and dash-cam footage provided by motorists played a vital role in piecing together what happened on Monday night.”