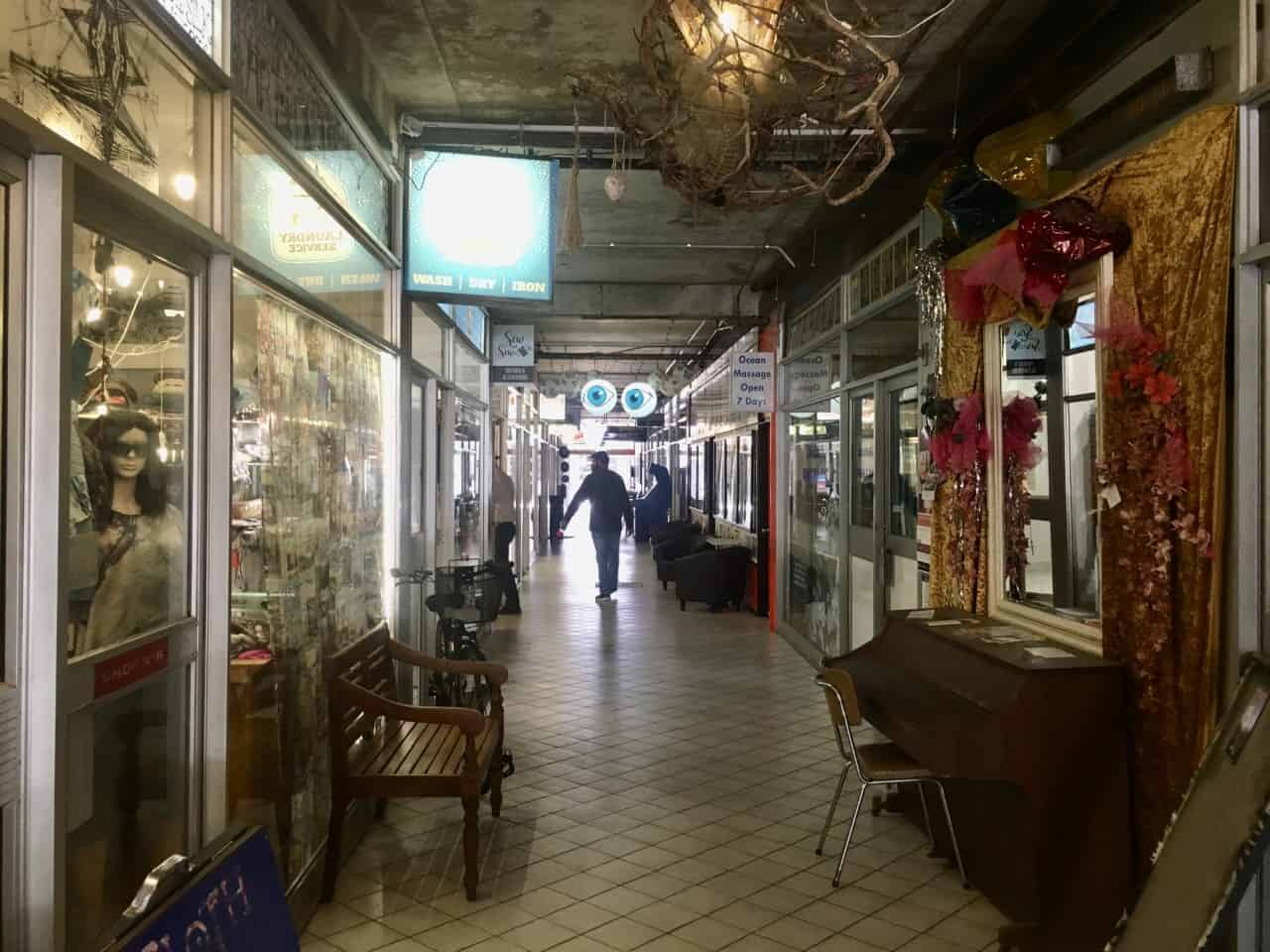 It was once an eclectic collection of small mainstay stores and a magnet for people looking for a decent shoe repair or a haircut, but for over a decade Darwin’s Air Raid Arcade has sat in obscurity – until now.

As shopfronts across Darwin shut their doors, the narrow arcade has emerged in colour after being snapped up by new owners in 2017.

The low-profile entrance is easily missed if you’re not in the know, but a flurry of ongoing renovations have rapidly changed the face of an arcade once described as “soulless” and “empty”.

By the end of this year, the vintage record store, games arcade, art space and Berlin-esque bar Babylon will co-exist alongside a new establishment the owners are hoping will “bring a bit of Paris to Darwin”.

Over the past two years, many of the dark features of the once dated arcade have been gutted by new owners Mulga and Kitty Kat, who also run Lola’s Pergola. 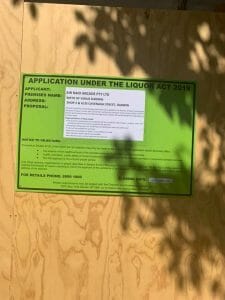 New bar Birth of Venus is in the works at the Air Raid Arcade.

The Air Raid Lodge above has been disembowelled, historic war pictures have been taken down, height has been added to the roof and now construction workers are transforming the first store facing Cavanagh street into a new cafe, bar called Birth of Venus.

“We’re really excited to give the town something else, a place for coffee catch ups during the day, and drinks and nibbles at night,” Kitty Kat said.

An entire arcade, with a 30 per cent occupancy rate, was not what Mulga and Kitty Kat were in the market for when they decided they wanted to open another bar.

Lola’s Pergola, a circus-themed bar by the waters of Cullen Bay marina, had become a bit of an icon in Darwin, but a stand-alone space in the city was virtually impossible to find at the time, Mulga said.

Despite the “staleness” of the arcade, and just six of the 18 shopfronts full at the time, he took the plunge and bought up the whole thing so he could open Babylon.

“We’ve spent every waking moment here – basically making it up as we go,” he said, “it was drab and needed love when we bought it.”

“We wanted a little bar in Darwin, we were looking at Attitude, and where Moorish is, but there was really nothing.

“We painted a picture of something funky and hoped people would come along for the ride.” 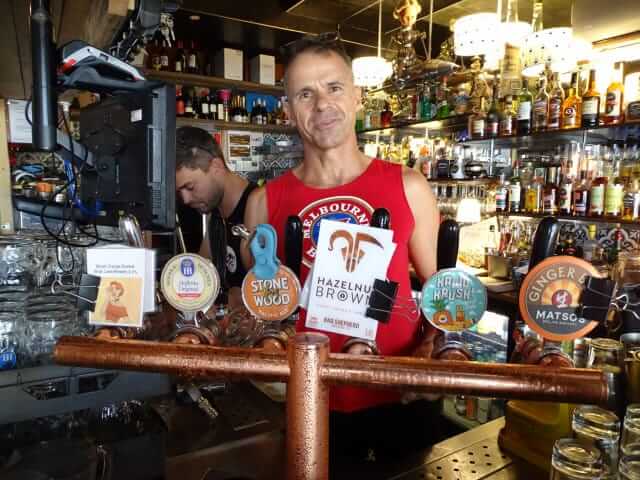 Mulga at Babylon in the Air Raid Arcade.

Plans for a new cocktail and wine bar, heavily influenced by renaissance art will be in stark contrast  to Babylon on the opposite end.

“We want Berlin, dark and dungeon-like, at one end and a classier Paris at the other,” Mulga said.

The constant evolution of the arcade and flexibility in what the end point will look like – if there ever is one – is what the tenants of the small shops within say has given rise to the revival.

For the first time in over a decade, the arcade is at near capacity. People wander through and are hard-pressed not to become regulars.

Artist Roxanne Voulanas sells new records, art supplies and guitar strings with her sister Shilo McNamee across from the Territory’s only dedicated second-hand vinyl store. They run art workshops as well and can often be found locked in a project, like painting the floor of Babylon.

They say they arrived when Mulga “was performing surgery on the building” and have seen the rise of wonder as people walk through.

“We get lots of people who have lived in Darwin for their whole lives coming through saying they never knew this arcade existed,” Ms Voulanas said. 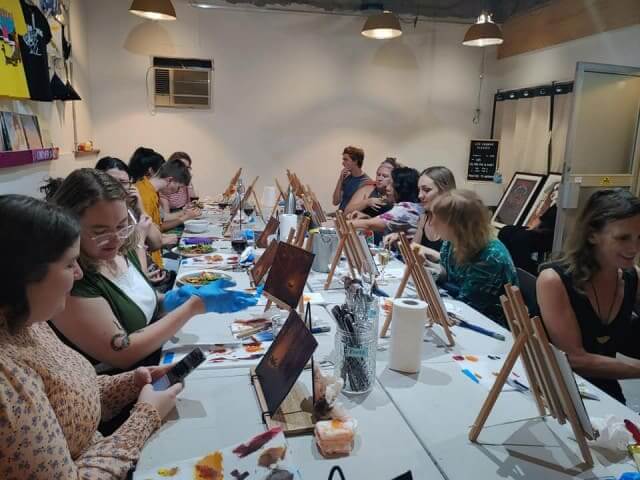 “We were part of that cohort, we grew up here… There just hasn’t been anyone putting effort into anything new, people aren’t taking risks anymore, but this is a great case study for when a little bit of effort works.”

It was 1994 and he was 26 when he started working in the barber with his father . “Darwin was booming,” he says, yet the arcade still had empty shops.

He cites his Greek background to his longevity in the arcade, and now couldn’t imagine moving.

“When we started this business we started from scratch, it wasn’t easy,” he said. 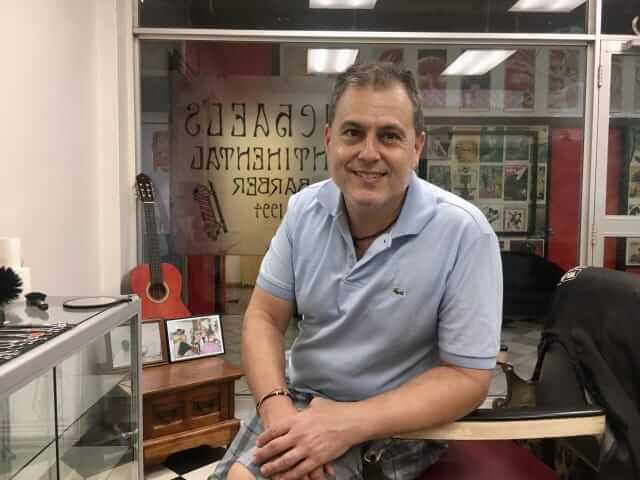 “I’ve seen it transform over the years, but no one put their heart into it.

“Mulga has turned this arcade, at the moment we have the funkiest bar in town, there is atmosphere. Word is getting out we have the wow factor.”

Artist and designer Anna Reynolds points to the arcade’s new owners as the reason for its upswing against the backdrop of a pandemic.

Survival would have been tough had it not been for their support and hard work, she said.

“The building was completely different when I first moved in about three years ago.

“The physicality has gotten more eclectic. Every time I get back from working on Groote Eylandt – Mulga has changed something. It is constantly evolving.”

Mulga and Kitty Kat are expecting Birth of Venus to be up and running by the end of this year.