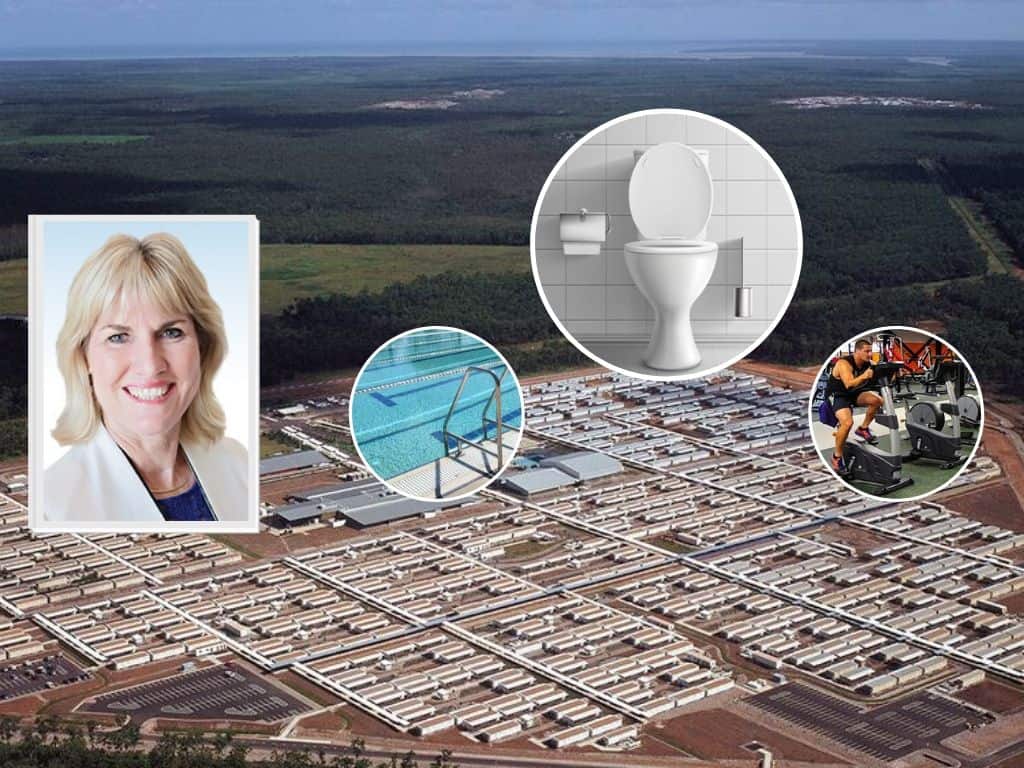 The resort-style village – officially known as Manigurr-Ma Village – was gifted to the NT Government in April 2019 by Inpex following the end of the construction phase of its LNG Ichthys facility.

Despite being aware of the handover since at least 2013, government documents show the Department of Infrastructure, Planning and Logistics (DIPL) sought a Treasurer’s advance to cover part of the costs last year, calling maintenance of the 67-hectare resort an “unplanned expenditure”.

“You have to ask why it cost that much. They only had two security guards there using one dunny.”

Government memos obtained through Freedom of Information laws also reveal internal concerns were raised but ultimately ignored about the decision to not put the maintenance contracts out to public tender, as per typical process, and instead relying on period contracts that may have been more expensive for taxpayers.

Successive NT Governments failed to identify a plan for the village’s use with a final report from a public consultation process that ended last August still outstanding.

Independent Member for Nelson Gerry Wood, who sat on a committee that reviewed proposals for the facility, said finding a new use was a challenge. He also questioned why the water and sewerage bills were so high.

“That’s what I would be asking, but we don’t have an Estimates hearing this year,” he said.

“You have to ask why it cost that much. They only had two security guards there using one dunny.”

However, the memo concluded that, “even with the concession, the cost of the sewer rate to DIPL is still substantial at $1.04 million per year” and suggested costs could be reduced by disconnecting the site from the sewer pump station completely, but it appears that did not happen.

The internal documents also show DIPL was still unsure how a maintenance contract for the village would work and how many people would be needed to mow the lawn and maintain the pool three months after assuming control of the facility.

“So at this point we are looking at somewhere between 2 FTE [full-time equivalent workers] part time (2 days per week) with additional ad hoc works (being the minimum level) and 3 FTE full time (which is the maximum previously approved by Andrew [Kirkman, DIPL chief executive]),” one internal email dated July 3, 2019 stated.

“As maintenance of the Village is unfunded, then I would recommend the minimum (number of staff) …”

The resort reportedly cost Inpex $260 million to build and was constructed to accommodate 3500 employees with 875 accommodation units. It also has its own medical centre, gym, basketball court, pool, tavern, commercial kitchen, tennis courts, a 50-seat movie theatre, a sports oval and 44 laundry buildings.

The accommodation village is currently being used as a “back up” facility that could see people infected with COVID-19 moved to the resort to relieve stress at the Royal Darwin Hospital, as well as potentially provide quarantine for vulnerable Territorians with nowhere else to go if the pandemic spreads.

Chief Minister Michael Gunner has ruled out using it as a quarantine facility for interstate visitors who will instead be put up in hotel rooms at a cost to taxpayers of $2500 per person, until Friday when the cost will be transferred to the traveler.

“As per the Government’s decision, the Inpex Village has been transferred to the department to upkeep with no allocated funding,” the report stated.

“Since the transfer in April 2019, it is projected that the costs of maintaining the village until 30 June 2019 would be approximately [$810,000] in power and sewerage costs alone.”

This came as the Gunner Government was overspending close to $170 million on unbudgeted items in the two months following the May 2019 budget.

The internal documents also reveal that the department used period contractors to maintain the site without going through a public tender process that would have ensured best price for taxpayers.

The contract was given to Regional Asset Management Services (RAMS), with Larakia Development Corporation (LDC) as subcontractor. LDC had worked on the site for five and a half years for Inpex, completing full-time maintenance duties, which was then scaled back when DIPL took over.

The security contract was awarded to Wilson’s Security through another period contract that also did not go through the public tender process.

“It is noted that not procuring these services through an open process may attract criticism from other contractors capable of undertaking these works,” it stated.

The documents suggest the department did not put the works to public tender because it did not know how long it would manage the site.

The Manigurr-Ma Village was used in February to quarantine more than 260 Australians evacuated from Wuhan, China and 164 Diamond Princess cruise ship passengers.

That was managed by the Commonwealth Government and Australian Border Force. The NT Government has declined to reveal what it was paid for the use of the facility.

Government figures show the department spent a total of $1.97 million to maintain the facility between May 1, 2019 and February 6, 2020.

Infrastructure Minister Eva Lawler did not respond to questions about whether taxpayers received best value for money for the maintenance of the facility or why the maintenance was not budgeted.