‘May impact life and safety’: Major safety concerns with TIO Stadium revealed ahead of Grand Finals 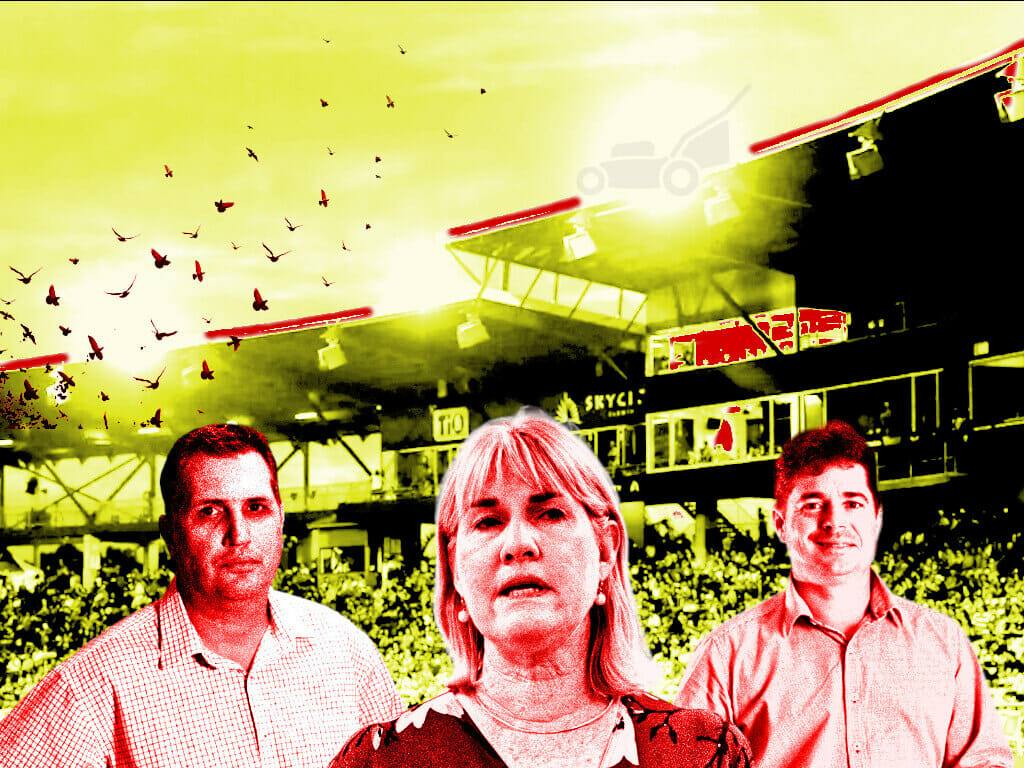 TIO Stadium’s unresolved safety issues “may impact life and safety”, according to an unredacted engineer’s report that the Department of Infrastructure commissioned last year and tried to hide from the public, which the NT Independent has obtained.

Despite being aware of the unresolved safety concerns identified in the report, the government has continued to permit people to enter the facility in contravention of the law, while also failing to properly certify the building with an occupancy permit.

The unredacted report by BCA Engineers, which was completed using visual, non-invasive inspections in late 2020 on the main grandstand building and finalised last March, shows serious concerns around electrical issues, water supply including the risk for contaminated drinking water, lighting and emergency exit problems, as well as previously reported fire hydrant water flow issues that fail the minimum national standard and creating the potential to put lives at risk in the event of a fire.

The rectification of some of the problems are considered to be of “high priority”, according to the report.

Last week, Infrastructure Minister Eva Lawler issued an extraordinary ministerial declaration to exempt the stadium from requiring an occupancy permit ahead of this weekend’s NTFL grand finals – a tacit admission that the government was aware it was breaching the law by allowing people to enter the facility without an occupancy permit.

That matter is currently being investigated by the Independent Commissioner Against Corruption.

The NT Independent first raised the public safety concerns at the stadium in August 2020, but the government ignored questions and issued a statement claiming the building was “safe” for major AFL games to go ahead that week, offering no evidence to support that assertion.

Last year, the government refused to release the full BCA Engineers report under Freedom of Information laws, releasing a heavily-redacted version that showed serious fire hydrant flow issues well below the minimum requirements of the National Construction Code and Australian standards, while keeping the other safety issues hidden from the public.

However, the unredacted BCA Engineer’s report, finalised in March 2021 and obtained by the NT Independent this week, shows more safety issues remain unrectified.

The report found one serious concern was that electrical switchboards at the stadium were unsafe. It recommended immediate work, however it remains unclear if anything has happened and the stadium remains without an occupancy permit.

“Provide RCD (residual current device) protection as required to bring all switchboards into compliance in accordance with current AS3000 requirements,” the report recommended.

“Priority of rectification works is considered to be high.”

Another issue involved emergency lighting and exit signage, which the report found “does not appear to … comply with NCC requirements”.

“A certifier should be engaged to review egress provision and exit paths to confirm exit signage and emergency lighting requirements,” the report stated.

“Some additional exit signage and emergency lighting may be required.”

Water supply was also raised as being non-compliant in the report and that the government may attract penalties for using unsuitable “in line pumps”.

“Based upon inspection findings it is evident that the water supply to the site is not sufficient compared to the requirements at the time of construction,” the report said.

“In particular, the water supply to fire hose reels is insufficient.”

The report added that two “in line water pumps” installed on Level 3 of the stadium were outlawed by Power and Water Corporation and recommended removing them “to avoid penalties that may be imposed by the PWC” and replaced “to comply with PWC requirements”.

It also found the water supply issues to the fire hose reels and kitchen equipment on Level 3 needed to be rectified as a matter of high priority.

“The fire hose reel system … does not currently meet the requirements … because of the poor water supply,” the report stated.

The engineers also found faults at the stadium’s fire panel, which they “assumed” to be related to ongoing roof works at the time of inspection, but recommended as a matter of priority that the fire panel be made free of faults.

Again, it remains unclear if that was completed.

The report also found that fire hose reels in all areas which are intended only to be used for firefighting purposes were “commonly used for other purposes on site”.

“The use of fire hose reels may be subject to an infringement notice,” the report stated. “it is also noted that the fire hose reels are connected to domestic [water] supply without backflow prevention, meaning there is a risk [of] contamination to drinking water.”

Report commissioned by department after claiming building was ‘safe’

The report was commissioned by the Department of Infrastructure in 2020, shortly after the safety concerns and the building’s non-compliance were first raised publicly. The department argued it could not provide an unredacted copy of the report in February 2021 because it was a draft report. However, the final report was dated March 2021.

Both department chief executive Andrew Kirkman and NT Building Controller Mark Meldrum refused to say why they permitted people to enter the building without an occupancy certificate and while aware of the unresolved safety issues.

Ms Lawler has also refused to explain why she issued a ministerial declaration to exempt the building after allowing thousands of football fans into the stadium since August 2020.

The ICAC’s investigation will include possible breaches of Section 66 of the Building Act that forbids anyone to “promote or conduct a public assembly in a place, building or temporary structure unless an occupancy permit has been granted…”

Ms Lawler, Mr Meldrum and Mr Kirkman were aware the stadium did not have an occupancy permit since at least August 2020, when the NT Independent first raised the matter with her office and department.

Mr Riches previously told the NT Independent that he had made inquiries over the last few weeks about the government’s management of the stadium’s issues to Ms Lawler, Chief Minister Michael Gunner and Mr Meldrum, among others.

He said Ms Lawler gazetted the exemption for the stadium shortly before he received their responses.