Man who crashed car into Alice Springs pub doused himself in petrol: Video 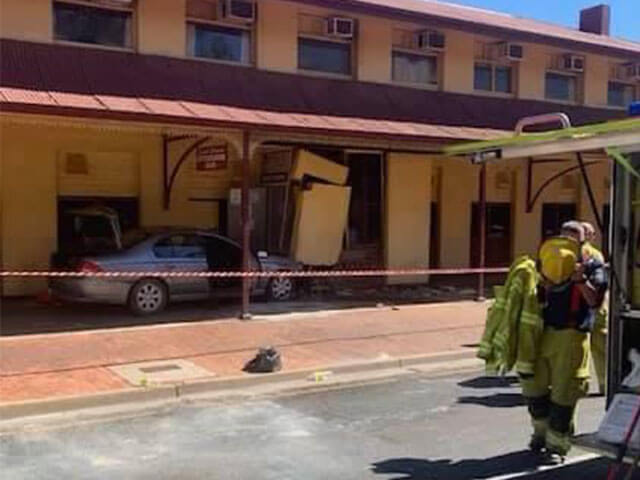 A man in Alice Springs appears to have shockingly doused himself in petrol after crashing a car into the Todd Tavern this morning in a disturbing scene captured on video.

The Indigenous man is seen in the video dousing himself in what witnesses said was petrol as two women argued with him after the car was crashed into the bar.

NT Police did not mention the petrol dousing incident in a statement about the crime scene.

Police said the 34-year-old man drove the vehicle into the side entrance of the establishment around 11am, forcing patrons inside to jump out of the way to avoid being hit. Police did not say if anyone else was in the car at the time.

“Following the crash, the man exited the vehicle and fled the scene,” police media manager Rob Cross said in a statement, omitting the part about the petrol dousing.

“Police located him nearby and he was arrested,” Mr Cross said.

“A crime scene has been declared. Traffic diversions are currently in place while police are investigating.”

Alice Springs has had at least three crimes committed involving vehicles in the last two weeks, including a hit and run that killed a man on the Ross Highway earlier this month.

On Tuesday, an allegedly drunk driver smashed into cars at a supermarket carpark, sending one woman to hospital with minor injuries.

The 19-year-old then ran a red light and rear-ended a car on the Stuart Highway. He was later arrested after his car broke down on Palm Circuit. He’s currently facing seven charges, including high-range drink driving, failing to stop after a crash and recklessly endangering serious harm.

CLP Member for Braitling Josh Burgoyne posted a picture of the Todd Tavern car crash on Facebook, calling on Chief Minister Michael Gunner to provide assistance to the community.

“This is becoming to (sic) much of a common occurrence in our town,” he wrote. “Something needs to change now.”

“The frequency and severity of these incidents is escalating,” Ms Lambley wrote.