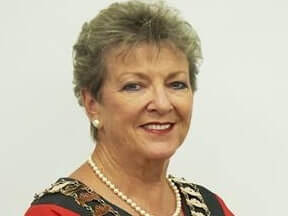 The longtime Mayor of Katherine has announced she will quit politics before the end of the year, just five months after she was diagnosed with leukemia.

After almost a decade in the small town’s top position, a serious health scare at the beginning of this year led to a bone-marrow biopsy and an ultimate diagnosis of myelofibrosis – a rare type of bone marrow cancer which disrupts the body’s normal production of blood cells.

The illness is manageable, but not curable, and on advice from her haematologist, she will be relocating to Darwin to be closer to medical assistance.

“I feel like a human being compared to the beginning of this year,” she told the NT Independent.

“Thanks to the wonders of modern medicine, I am currently experiencing stable health, and certainly hope to continue as long as possible on that path.”

Representing Katherine for over 25 years on a myriad of committees and exceptionally passionate about the region, Mrs Miller said it has been a privilege to serve the community since first elected as an Alderman at a by-election in 2002.

She also served as the local Member of the Legislative Assembly as a CLP member from 2003 to 2008.

Despite leaving Katherine in the wake of a COVID-19-induced tourism lull, a severe doctor shortage and ongoing crime issues, Mrs Miller said she is confident in the future of the regional town, 300 kilometres south of Darwin.

From making national headlines in 2018 for demanding an apology from federal Health Minister Greg Hunt following a verbal attack, to playing a key role in protecting the township from the onshore gas industry and advocating for multi-million dollar projects to better the town, Mrs Miller said she has loved every second.

“Having the privilege of representing all levels of concern and queries in the community, that has been the big achievement,” Mrs Miller said.

But she also highlighted the soon-to-be finished CBD Revitalisation project, the drawn-out and ongoing discussions to secure Katherine as an agri-business hub and the completion of the Hot Springs project this year – even if it did start out as a “nightmare”.

Moving to Darwin for better access to health services is not a mark on Katherine, Mayor says

Like many families living in regional towns, Mrs Miller is making the decision to head to a larger city where there is better access to medical facilities.

She says she has been undergoing chemotherapy since April, but there may come a time when she needs a blood transfusions, a procedure not available in Katherine.

However, the lack of access to high level medical services is bot a blight on Katherine.

“It is just not possible to financially sustain, nor is it practical, to have that level of specialist service in a regional area like Katherine,” Mrs Miller said.

She said many families have had to relocate over the years – mainly to Adelaide – to access these types of high-level services.

But “a Territorian through and through”, Mrs Miller said she is happy with the care she is receiving at the Alan Walker Cancer Care Centre at the Royal Darwin Hospital.

“Fay has been an extraordinary contributor to the Katherine community,” she said. “Fay arrived at the same time as myself 30 years ago and I have been Fay’s hairdresser for most of that time. I wish her and Dennis every happiness in her retirement.”