A Darwin man who in a fit of rage left his teenaged partner with a fractured skull and a severe brain injury when he hit her twice with a plank of wood has been sentenced to prison.

Keenan Baxter, 21 at the time of the incident, was sentenced in the Supreme Court of the Northern Territory to prison for six years and six months, with a non-parole period of three years and three months.

In handing down the sentence, NT Justice Judith Kelly said the “serious offences” carry a maximum penalty of life imprisonment.

“It is extremely lucky she did not die. She could easily have done so from even one of those blows,” she said.

“You used a very dangerous weapon to hit her on the head… and you hit her again, hard, when she was down. You put your weight behind those blows and her injuries were extensive and serious.”

Baxter pleaded guilty to five charges of aggravated assault and one count of intending to cause fear by threatening to kill.

On the morning of February 17, 2020, on the hunt for cannabis and cigarettes, Baxter became enraged when his 19-year-old partner asked him to stay at the home they were visiting to take care of their nine-month-old baby.

The court heard Baxter’s partner picked up a rum bottle but did not throw it. An argument ensued.

A friend who tried to intervene was punched in the mouth as another friend picked up the baby to take it to safety next door, and called the police.

The escalating argument was taken outside, where Baxter picked up a 10 cm thick slat from a bedframe and hit his partner so hard next door neighbours “heard both blows as cracks”.

“You walked up behind [your partner] and you raised the plank of wood over your head and swung it really hard from your right shoulder, across your body and hit her on the back of the head with it,” Justice Kelly said.

“She dropped to the ground, and while she was lying there, helpless, you raised that plank of wood up again and you swung downwards and hit her on the side of the head as she lay on the ground.” 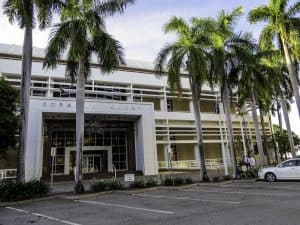 The court heard Baxter was taken to the Palmerston Watchhouse and in a recorded interview with police the following day, took little responsibility for his actions, but instead blamed the victims “for making everything worse”.

In response to police questions on whether he had permission to assault the victims he said: “People interrupt me, they get crack.”

A long list of prior convictions were read to the court including three weapons offences, two convictions for aggravated assault, a conviction for violent conduct and one for a breach of a domestic violence order.

In 2018, in a prior “brutal” incident, the court heard Baxter pestered and assaulted his partner after she told him she no longer wanted to be in a relationship.

In another incident he pushed her over and kicked her.

Another time, he pushed her around the room, kicked her when she was on the ground, slapped her and punched her.

“Those are brutal and cowardly things to do, essentially. The violence that you have been using against this woman has got worse, a lot worse,” Justice Kelly said.

‘There is too much violence in our community, especially against Indigenous women’: Justice Kelly

In handing down her sentence, Justice Kelly said she was imposing a sentence that sent a “strong” message the court and the community condemns violent offending.

Making a case for her sentence to discourage violence against women, she said there is “way too much violence in our community, unfortunately, especially often against Aboriginal women, often committed by partners or ex-partners”.

Despite seeing little hope of a future void of crime, unless Baxter could get a handle on his anger, Justice Kelly said he was “obviously far too young to be written-off”.

“Given the fact that you have hurt this woman before and then went on to do it again, only worse, and the fact that your immediate reaction was to blame the victims, I think that your prospects of rehabilitation are pretty poor,” Justice Kelly said.

“Perhaps you will be assisted by programs in prison.”